The design of the ASUS ZenBook UX330UA-AH5Q takes you close as you can get to the Apple MacBook with a stunning aerospace grade aluminum body. At first glance, the 13-inch laptop looks identical to the well-reviewed ASUS ZenBook UX330UA-AH54, and the folks at Asus have always insisted on a premium build across the ZenBook line.

But on the inside, it’s a different story. It uses the same Kaby Lake processor but flaunts a QHD+ (3200×1800) resolution screen, which is a nice thing from the usual Full HD (1920×1080) in most laptops in the midrange category.

It takes on the likes of the Dell XPS 13, MacBook Air and HP Spectre with an upgraded seventh-generation Intel Core i5 processor (Kaby Lake), 8GB memory and 256GB SSD. It is obvious that you’ll need to make a few feature concessions with an ultraportable laptop that’s this thin and light, including fewer USB ports and lack of an optical drive, but the 300 nits QHD+ display and solid overall performance are worth it.

The Asus UX330UA-AH54 maintains the distinctive features of all Zenbooks:–a thin and light build, premium aluminum chassis, rounded corners and of course concentric circle patterns on the lid with a centered Asus’ silver logo. If you’re into design, the system’s matte-silver finish that is fingerprint resistant will be something to look out for in this machine. All this makes it look a lot more like the Apple MacBook Pro with Retina display.

The laptop measures 0.5 by 12.7 by 8.7 inches (HWD) and weighs 2.6 pounds (9 ounces lighter than the Asus UX305UA-AS51), and the chassis has been made thinner. If you need to carry it around, you can slide it into the Bonvince 18.4″ Laptop Backpack, which has nicely placed compartments for the power adapter, mouse and other peripherals. It has the same comfortable keyboard, carbon fiber keyboard deck, and one-piece touchpad.

Surrounded by half-inch bezel, the 13.3-inch non-touch screen is bright and crisp thanks to an LED-backlit matte panel with QHD+ (3200×1800) resolution. The screen is further boosted by the IPS technology, alongside wide viewing angles (up to 170 degrees) with 300 nits, making it an impressive panel that you can use for longer periods without eye strain.

Currently, 4K screen are now pretty much standard for high-end desktop-laptops like the Dell XPS 15, but the QHD+ is still the best for daily computing needs. However, if you’re into media creation, then a 4K panel is worth considering as they show more accurate colors. Even so, the display should be good enough for enthusiast-level digital photography and video.

The backlit keyboard has square, chiclet-style keys, but there isn’t enough room on the right side of the deck even for a small number pad. All of the keys provide fairly shallow travel, but are ultimately comfortable to type on. The large silver touchpad right beneath the keyboard has integrated left- and right-click buttons, which are smooth and responsive alongside a built-in fingerprint scanner.

Practically, to have a thinner chassis you have to do with a few concessions. Here the number of full-size USB ports has shrunk from three to two – one on each side. The full-sized HDMI port has also fallen, and in its place, you have a micro-HDMI port on the right side of the laptop.

The 8GB of memory and 256GB solid-state drive (SSD) are identical to what you get on the Acer Swift 7, the HP Spectre 13, the MacBook Pro, and the previous two versions of the XPS 13 Touch. The Asus ZenBook 3 comes with double the memory and storage, but the combo here seems to be the present sweet spot between price and usability for a midrange or high-end ultraportable. It gives you enough RAM to keep a few apps as well as dozens of browser windows (including smoothly streaming music and video) open simultaneously, and sufficient storage space to house most of the programs you’ll use every day, as well as your projects or movies.

The ZenBook AH5Q is well equipped with a 2.5GHz Intel (Kaby Lake) Core i5-7200U processor and 8GB of RAM, plus Intel HD graphics. The seventh-generation processor is the latest release and it does crunch number well with strong performance. It adds some much-needed performance, as well as quite a bit of extra battery life, which was a sticking point of the previous ZenBook models. What’s truly impressive about this system is how ASUS managed to fit in a Sky Lake processor and gobs of memory in such a tiny machine. The processor spits speeds of between 2.5GHz and 3.1GHz, combined with 8GB memory its ready for most day-to-day computing needs.

All these give the ZenBook AH5Q enough muscle to close-in on systems like the Apple MacBook, Dell XPS 13 Touch, and HP Spectre 13. Look at it, the MacBook is still stuck with slow m3 and m5 CPUs and a maximum of 8GB RAM. We expect that Apple might refresh it soon, now that we have the seventh-generation CPUs trickling into the market, but as it stands now, ASUS ZenBook 3 wins the spec battle.

On the Zenbook UX330UA-AH54 is the integrated HD graphics, typical to midrange ultraportables, which don’t provide much room for 3D gaming. The ZenBook’s Kaby Lake processor is ultimately higher than their predecessors, and together with a dual-channel RAM, its performance is at par with most dedicated lower mid-range graphics cards. Even at low resolution and low to medium quality settings, you can smoothly run games; especially true for games that arren’t too demanding.

For midrange gaming, you might have to look at the ASUS K501UW-AB78 which comes with a dedicated NVIDIA GeForce GTX 960M gaming graphic card, or better still the Acer Aspire VX 15, thanks to its potent NVIDIA GeForce GTX 1050 Ti 60M 4GB GDDR5 graphic card. If we get nitty, the Zenbook AH5Q’s gaming performance is on par with Apple MacBook Air 13-inch and the Dell XPS 13 Touch, though with slightly negligible differences since none of the three can run high-end 3D games smoothly.

Battery life is spectacular. Thanks to its 57-Whrs polymer battery pack, the Zenbook UX330UA lasted 10 hours and 43 minutes on our rundown test, eschewing the Dell XPS 15 Touch (9550) (5:56) and even the MacBook Pro 15-Inch Retina Display (2014) (8:55). It may weigh more than the svelte ultraportables, but it lasts nearly 6 hours longer than most competing laptops. This laptop can last a full work day, and then some.

Bang for the buck

The ASUS ZenBook UX330UA-AH5Q is a high-end desktop replacement laptop with powerful Intel “Kaby Lake” Core i5 processor, a crisp QHD+ screen, plenty of networking options, best-in-class battery life, and strong performance. It doesn’t stand out like its predecessor the ASUS Zenbook UX305UA-AS51 did at the time of release last year, in part due to the competition from more potent systems like the ZenBook 3, Acer Swift 7 and Dell XPS 13 in the same category.

The Asus Zenbook 3 remains our Editors Top Pick premium ultraportable laptop thanks to its: speedy, enduring, thin, extremely light weight, beautiful screen, good aesthetics and sturdy build quality, but the UX330UA AH5Q is a great option if you’re on a budget and are looking for a powerful machine that will last all day. 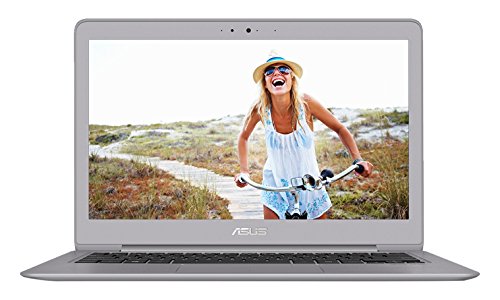