The ASUS ZenBook Pro UX501VW-DS71T is a solid desktop replacement laptop with excellent performance, aspects that are at par with the competitors in the high-end category.

The 4K revolution is gaining ground, and higher-than-HD displays are being thrown about willy nilly in the premium laptop space. Now as is in the game, the ASUS ZenBook UX501VW-DS71T, a high-end laptop replacement, goes against the likes of the Dell XPS 15 Touch and Apple MacBook Pro 15-inch, do deliver a stylish laptop set in an aluminum construction, a gorgeous 4K display and decent performance.

If ultra-HD quality and a premium construction is what you’re after, the selection of laptops to choose from just got a bit bigger. The real kicker that will keep you impressed in the ZenBook Pro UX501 are its sleek design, nice graphics, a fantastic display, and solid performance, but it comes with an affordable price than the competition to match.

For the longest time, design comparisons have been drawn towards the Apple MacBook Pro, but the fact is that Apple’s aluminum unibody has been aped by almost every laptop maker on the market. For instance, in the ZenBook line, the all-metal, minimalist look is de rigueur for all laptops and extends to other manufacturers, so I’ll just mention the passing similarity and leave it at that.

The ZenBook Pro sports a radial, brushed pattern across the lid, and a distinctive circular pattern of perforations serving as the grille for the system’s built-in speakers. As expected, there’s more than a passing resemblance with the 15-inch Apple MacBook Pro, but the unique styling sets on a different niche altogether. The ZenBook Pro UX501VW-DS71T measures 0.8 by 15.1 by 10 inches (HWD) and weighs 5 pounds.

The 15.6-inch 4K display is really something to watch out for, thanks to the impressive In-Plane Switching (IPS) 3,840-by-2,860-resolution panel, with edge-to-edge glass, and 10-finger touch capability that offers vivid colors and excellent viewing from almost any angle. These Ultra-High-Definition (UHD) displays have become the new standard for premium desktop-replacement systems, putting the ZenBook Pro on even footing with the likes of the Dell XPS 15 and the Toshiba Satellite P50T.

For storage, there’s a 512GB solid-state drive (SSD). While not as large as the 1TB of hard drive storage offered by the Toshiba Satellite P50T, it is larger than the 256GB Flash Storage module offered in the base model of the Apple MacBook Pro. It’s also faster than both of those alternatives, thanks to a 4x PCIe connection that offers better data-transfer speeds than traditional SATA connections.

The keyboard is similar to that seen on the ASUS ZenBook UX303UB, with square, chiclet-style keys and automatic backlighting that adjusts according to the ambient lighting in the room. Below the keyboard is a touchpad, and Asus claims that the 16:9 aspect ratio of the touchpad is more efficient since it matches the aspect ratio of the display. Whether or not it’s an improvement is up for debate—I didn’t notice any real difference—but the glass-surface click pad works well, and supports all Windows 10 gestures.

On the right side, you’ll find two USB 3.0 ports, an SD card slot, and a headset jack. On the left are a third USB 3.0 port, which also boasts power for charging gadgets while the laptop is asleep, along with an HDMI-out port and a Thunderbolt port. That Thunderbolt port does double-duty as a mini DisplayPort, but also offers fast data-transfer capabilities for high-speed storage and docking accessories.

This is an especially nice feature if you’re buying this laptop for use in a home or business that uses a lot of Apple Mac hardware, where Thunderbolt has the largest market presence. Internally, the Zenbook features not only dual-band 802.11AC Wi-Fi and Bluetooth 4.0, but is also equipped with LoJack, so you can track down your laptop if it gets lost or stolen. Memory cards can be slipped in, there’s SD card slot for them.

Outfitted with a Skylake Intel Core i7-6700HQ quad core beast with a subtle 2.6GHz clock speed, which can hit 3.5GHz in turbo and 16GB RAM, the ASUS ZenBook Pro UX501VW-DS71T packs enough power for even your most demanding projects. This kind of configuration give it an edge over most competitors, and a CPU Mark score of over 8000 points.

For instance, the Core i5-5200U fitted in less expensive units such as the Toshiba Satellite C55-C5241 scores around 3500 points, but ZenBook Pro’s Core i7-6700HQ process puts it clear of most desktops seamlessly. Going by recent trends, its clear that the configuration is nearly identical to the game-oriented ASUS ROG GL551JW-DS74, but the Asus Zenbook Pro UX501VW cuts a niche for itself as a premium desktop-replacement laptop.

Graphics performance is top-notch thanks to the Nvidia GTX 960M with 2GB, putting it at par with most entry-level laptops as it can produce playable frame rates (up to +60FPS even in high settings and 1920×1080 resolutions). For this you can play modern titles such as GTA 5 and Battlefield 4, but for more graphic-intensive games such as The Witcher 3, you’ll be getting round 30FPS on higher settings, which is almost the same for most entry level gaming rigs.

While the laptop isn’t built to satisfy hardcore gamers, and certainly won’t deliver the sort of 4K graphics the display can support, it does have some gaming capability, so long as you dial down the settings and don’t expect flawless performance.

About the only aspect of performance that’s lackluster is battery life, with the laptop lasting 6 hours surfing the web. Given the power requirements of a 4K display, this isn’t too bad—and it’s better than the Toshiba Satellite P50T (2:45)—but it still falls behind the competition. The Apple MacBook Pro 15-inch leads with 8:55, but the Dell XPS 13 (5:48) and the ASUS N550JX (5:24) both manage to break the 5-hour barrier.

The ASUS ZenBook Pro UX501VW-DS71T is a solid desktop replacement laptop with excellent performance, aspects that are at par with the competitors in the high-end category. While it may not be the only 15-inch laptop in the market to provide 4K resolution, it does so with top graphics performance and pretty good processing power, with several fine touches, like a premium design, high-quality audio, and touch capability. 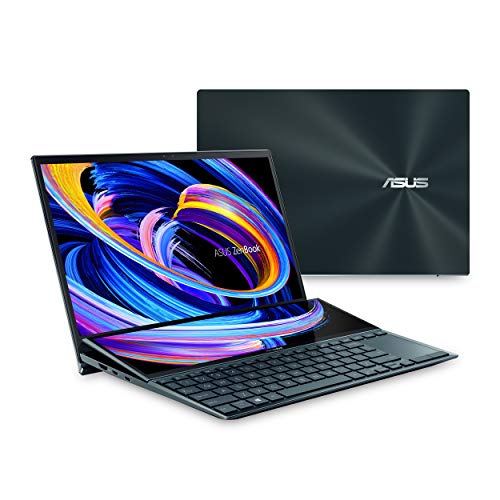