The Beelink SER3 is easily one of the best budget mini PCs in the market that can perform basically any desktop you need outside of heavy gaming. It strikes the right balance between performance and value, and the onboard Vega 8 graphics make it an even better choice.

The Beelink SER3 is a mini PC most of us are going to like. It packs a ton of horsepower in a tiny package, with room for more storage and support for additional RAM. Thanks to its Ryzen 5 3550H processor, the SER3 will run essentially every task you would want. And the onboard Radeon Vega 8 supports 4K playback, meaning you can run some emulation or light 720p/1080p gaming.

Starting at hundreds less than comparable NUCs, the Beelink SER3 is perhaps what we all envision in a perfect mini PC: affordable, powerful, and versatile. Since it does everything you’d want on a desktop while taking up very little space, it is the perfect choice for home entertainment or office use. You can even mount it on a wall or the back of your monitor with the included bracket, giving you an extremely tidy desktop setup if you’ve invested in wireless peripherals.

In this Beelink SER3 mini PC review, I’ll explain why I think this is the mini PC to get, especially if you need more power than mid-range alternatives can offer.

In practical terms, the Beelink SER3 doesn’t try to stand out. It’s just a black rectangular cube with the sides and most of the lid well ventilated. The front panel has a red power button next to a reset pinhole, two USB 3.0 ports, a 3.5-inch audio port, and a USB Type-C port.

Around the back, you get more connectivity ports: two HDMI ports, a Gigabit Ethernet port, two extra USB 3.0 ports, and a power input. Sadly, it doesn’t include a memory card reader.

Measuring 8.5 x 5.43 x 2.32 inches and weighing in at just 2.12 pounds, this piece of kit is very compact and portable, but not as compact as some Nano PCs like the Chuwi Lark Box (6.97 x 5.75 x 3.31 inches, 1.17 pounds) and the chassis is almost entirely made of metal. The top has a big grill that passes out for a speaker from afar, but in real sense that helps in cooling the components inside. The grill extends to the sides and back as well.

Under the hood, the Beelink SER3 boasts an AMD Ryzen 5 3550H chip. This is a quad-core mobile processor with eight threads and a Radeon Vega 8 onboard graphics card. It has a 4MB cache and can run at up to 2.1GHz without slowing down, in part because it has low heat dissipation, at least for a desktop PC.

That’s a bit disappointing but fortunately, it’s a hardware upgrade that’s easy to perform. There’s also a free 2.5-inch bay to accommodate either a SATA or HDD and the memory is also upgradable up to 32GB. Accessories bundled into the package include a 57W power supply unit, two HDMI ports, and a wall-mounted bracket.

Beelink SER3 Review: Performance and in use

Other than running Windows 11 Pro, there isn’t much to say about the Beelink SER3’s performance and the platform it runs on. It doesn’t have any bloatware no utilities as is often the case with popular brands. However, you need to adjust your expectations since the quad-core AMD Ryzen 5 processor isn’t going to deliver neck-breaking speeds in that matter.

The 3550H is a Ryzen 5 part but one with a low TDP – since it’s targeted for mobile devices – and therefore it has a low base clock speed. Don’t expect it to compete with the Apple Mac Mini with an M1 chip or the Intel NUC 11, both with peppy processors under the hood. However, it stacks well against Mini PCs such as the Geekom Mini IT8 powered by the Core i5-8259U, though this intel part has slightly higher TDP and a slightly higher base clock speed.

That doesn’t prevent the Beelink SER3 from making some moderate noise under load with fans kicking in as soon as you hit something chunky like video editing. Noise is the physical downside of fans working on overdrive to cool the processor and prevent throttling.

Used on its own, the Beelink SER3 stands out as a decent office PC that can sit well as an entertainment hub in the living room. The Radeon Vega 8 graphics card is better than what you ordinarily think of when you hear “integrated graphics.” There aren’t cheap processor-based graphics. These graphics are a GPU that’s built into the motherboard itself, but they lack graphics memory. In other words, you’ll be forced to share the regular RAM, which is slower and eats into your RAM.

Beelink advertises this as a 4K-capable graphics card, which is accurate technically. It can play videos in 4K and will support 4K streaming. That said, you’ll realize it lacks the power for 4K gaming, but cut scenes will display just fine. And if you’ll be playing modern games even at 1080p, you’ll have to roll back your graphics settings.

Simply put, with the Beelink SER3 you’re looking at a solid budget gaming PC for casual games or an overpowered office PC. Either way, you’re getting immense value for your money. In addition to the 16GB RAM, this Mini PC ships with a 512GB M.2 SSD, and there’s some room for an upgrade.

Should you buy the Beelink SER3?

The Beelink SER3 is a capable Mini PC that easily punches above its price to deliver solid performance in a small, affordable package. Its graphics are reasonably good, but by no means cutting edge. The AMD Ryzen 5 processor is a workhorse, but not the fastest out there. The design is rugged and well put together, and it’s very easy to mount. It even supports dual or triple displays, and that is pretty impressive for a machine this affordable.

If you need four cores and 8 threads and a minimum of 16GB, the Beelink SER3 is a great workhorse. If you’re into photo editing and some moderate video editing, this mini pc can do it. Of course, if your workloads exceed that, you already know that a mini PC like this one won’t meet your workstation need. Consider either the Apple Mac Mini with M1 chip or the Intel NUC 11 if you need more power in a tiny package. 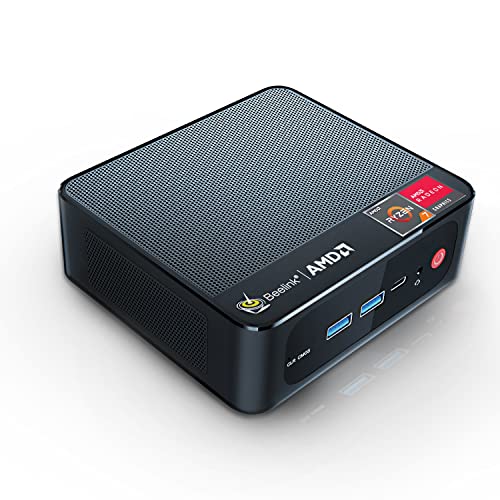 All said, the Beelink SER3 easily earns a top spot among our best mini PCs for its sheer power and value. It can be used almost anywhere – may it be at the office or home, but it also meets basic use scenarios incredibly well.