The BenQ HT2050A Projector is a small step up in price and performance than its closest competitors, but in return offers a 2200 lumens bright image. However, if you’re looking for a projector that you can carry around, you’ll have to look elsewhere. Granted, whatever it losses in portability, it makes up with a more aesthetically pleasing, curvy design and better contrast ratio and color that create the best picture we’ve seen in this price range.

Should you decide to spend your money on the HT2050A, just keep in mind you’re investing in fantastic picture performance and less on portability. This DLP projector punches above its weight with darker blacks, paired with bright whites, all with accurate color, and the result is accurate color, and that makes for a gorgeous image.

The HT2050A also gets a small amount of vertical lens shift, which is rare to come by at this price range and almost unheard of in a single-chip DLP projector. This means that many people will be able to fit the BenQ HT2050A in their homes.

But even with all these features, for under $1000, the BenQ HT2050A is one of the best projectors you can get out there that brings big screen full HD experience to the living room. Compared to other home theater projectors in the sub-$1,000 range, including Optoma GT1080HDR, Epson Home Cinema 2150, and BenQ’s TH685, the HT2050A remains our favorite and earns our Editor’s Choice award.

About the BenQ HT2050A Projector

Like all other projectors in this price range, the BenQ HT2050A projector doesn’t support 4K and HDR, but it’s 3D capable, though the glasses are not included in the package. BenQ claims 2,220 ANSI lumens, but measured values are approximately 1,596 – it’s normal for projectors to measure lower than the manufacturer-claimed specs. Still, this is a bright image, with the same level of clarity you get with the Epson HC2150.

Once again, lens shift at this price range is rare and even rarer with DLP projectors, so its inclusion here can easily prove to be the HT2050A’s main selling point even if it doesn’t look as good as it does. That said, the lens shift is pretty basic. BenQ claims it adjusts the vertical range by 10%, which means, depending on where you place the projector, you’ll have a few inches of vertical leeway; it’s indeed better than nothing.

The zoom range is average, falling behind the Epson. So, you will not be placing it quite as close, or as far, from the screen as the HC2150.

Here are the BenQ HT2050A specs in this review:

The lamp life is also average, rated at 3,500 hours in Normal mode, and that goes up to 7,000 hours in SmartEco mode which maintains maximum brightness of the normal mode but lowers lamp power during dark scenes for better black level. While you’ll see that happen occasionally, it’s fast enough and you’re better off leaving it in this mode.

The HT2050A is a single-chip DLP using TI’s DarkChip3 DMD device at 1920 x 1080 resolution. It’s pretty straightforward; just a 1080p native display with Rec.709 COLOR (96% according to BenQ), capable of 60Hz operation over its HDMI 1.4a inputs. The 240-watt UHP lamp has claimed lifespan of 3500-7000 hours depending on the mode. Instead of a traditional auto-iris, it boosts brightness via its SmartEco setting for better contrast.

The lens features focus and zoom along with the already mentioned, 10% vertical shift. It may not be much, but it helps with tricky installations, especially in the living room. The offset starts at 105% so regardless, you’ll have to mount the HT2050A either above or below the screen’s edge. The projector’s zoom range is 1.3x and the distance is somewhat short-throw-ish. Well, it isn’t a real short throw projector, but will display a 100” image from just over eight feet away.

The BenQ HT2050A is ventilated via generous grills in front and on the sides, and light leakage is very minimal but you’ll need to close the sliding door over the lens once the installation is complete. At the top, there are buttons for power, source, and menu navigation along with three navigation lights. IR sensors are located here and on the front for easy control.

Around the back, you have almost all the ports you’d ever need on a projector: two HDMI 1.4a ports, separate components, composite jacks, and a VGA connector. There are also two ports for powering accessories and a service interface. Control comes in way of a 12v trigger output and an RS-232 input. The grills on the back pass for two speakers, but it’s a clever chambering system that extends the soundstage of a single driver.

The sound option is powered by a 10-watt amp and delivers excellent sound for its size thanks to innovative fine-tuning. BenQ calls its CineMaster Audio+ 2 and it involves careful equalization and the use of quality materials like magnesium and pumps out surprisingly deep bass. Audio is further supported by RCA and 3.5mm inputs and a 3.5mm output.

The remote is compact and backlit. With the small size, not all discrete functions will fit but you get access to most projector options including power on and off, image blanking and keystone, calibration settings, and transport keys for HDMI CEC sources.

Elsewhere, setup hassle has been eliminated, and I believe it’s one thing BenQ makes better in each model release. It’s well-designed and the menu system is very intuitive. When you turn on the BenQ HT2050A for the first time, it runs you through a brief setup where you specify the projection type (table, ceiling, front, or rear), keystone correction, and a few other options. Then you can select basic settings or advanced menus. To watch 3D, you’ll need a pair of DLP-Link glasses, which BenQ offers, or you can opt for different models as well.

The HT2050A is in the same ballpark as both the Epson HC2150 and the ViewSonic PX727HD. The latter, just like the BenQ is DLP while the former is LCD, just like the majority of Epson’s projectors. So, in this review, we will compare the picture quality of the HT2050A against the Epson, since they boast almost similar features and prices.

Both projectors are far brighter than even some high-end projectors from a few years ago. What’s more obvious than the numbers would suggest is of well the black levels are, and that makes for an even better contrast ratio on the BenQ. This is clear when viewing widescreen movies, hereby the black bars are several shades darker on the BenQ. Since their light output is almost the same, the BenQ gets more dimensional and more visible depth to the image.

The BenQ HT2050A’s color performance is great, thanks to the Full HD 1080p resolution supported natively. It is a little richer compared to Epson’s and more realistic. Greens look particularly more natural, and the grass in Infinity War, for example, is a more vibrant and realistic shade of green. The blue in the shield wall is a solid, more vivid blue, without the sky looking like candy.

Another aspect where the BenQ shines is motion resolution. All LCD-based displays have some degree of motion blur, but that issue is not present among DLP-based projectors thanks to the way they create an image. As a result, the BenQ maintains steady detail even when things move. That means you can use it for movies and it can even suffice for gaming, although you’ll not get the exact level of fidelity you’d get with a high-res gaming monitor.

Before calibration, the HT2050A’s most accurate picture setting is Cinema, which is fine, but its grayscale isn’t close to D65, especially on bright images. However, all these are highly adjustable, and you can tweak them to be more accurate. On the other hand, colors are accurate out of the box, and just like temperature, colors too can be adjusted. While the BenQ 2050A doesn’t have the Iris feature, it does a variable lamp

Below are our suggested settings for the HT2050A, you can still tinker around to see which setting delivers the best image quality.

The BenQ HT2050A projector delivers excellent visuals at a modest price, and includes a few features that are only available in premium projectors. It offers excellent color accuracy, superb contrast, three-dimensionality for 2D video, a solid black level, and top-tier shadow details than even its closest competitors.

A combination of a solid feature set and reasonable price make this an excellent choice for traditional home theater, while the high brightness- and particularly the realistic color quality in the brightest mode – make this a perfect choice for rooms with ambient light as well. And it boasts a brighter 3D image than most of its competitors, including both the Epson HC2150 and the ViewSonic PX727HD.

When we reviewed the Optoma UHD38 a few months ago, we liked it for its solid 4K HDR picture, super-fast gaming response, and super-bright and crisp images. If you want epic gaming day and night or get the best from your next-gen console, that’s the projector for you. But it costs more than the BenQ we’re reviewing – not surprising for a 4K HDR projector.

On the other hand, for a reasonable price and good performance, the BenQ HT2050A fits in for almost everyone and is a decent choice for enthusiast gamers, sports fans, movie buffs, and casual viewers alike. For all those, the BenQ HT2050A Projector remains our favorite and earns our Editor’s Choice award. 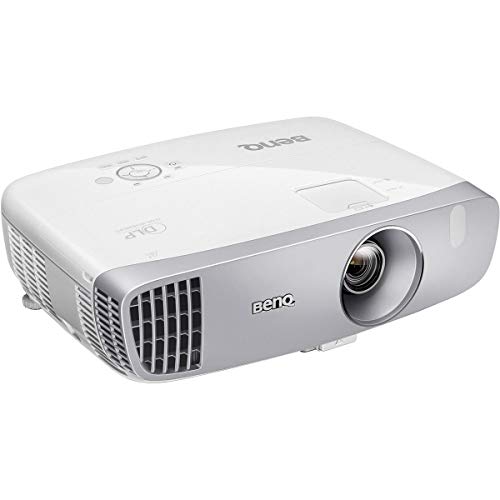 The BenQ HT2050A is a home-entertainment projector that delivers high-quality 2D and 3D performance, excellent contrast, accurate color, and solid features that make it our favorite sub-$1,000 projector.