To help you out, we have curated a list of the best gaming PCs available in the market, all of which we’ve interacted with and reviewed ourselves. The list covers machines from popular manufacturers like Alienware to custom-builders.

Whatever games you have at the top of you wish list this year, investing in a tricked-out gaming PC is crucial. Depending on your budget, getting one of the best gaming PCs as your main machine is not only beneficial in honing your skills, but can also serve as a multimedia powerhouse for years to come.

In fact, you may never have to purchase a new rig again, get one with enough real-estate, and throw in upgraded components once you feel its slowing down. We’re talking of 5-10 years from now, considering that we have components that are going to stay relevant for many years to come. Look at components like Nvidia’s Super RTX graphics cards, AMD’s Navi cards, intel’s 9th generation CPUs and Ryzen 3rd generation chips; these are going to be around for a while.

For now, it all depends on whether you want to save and buy a new rig in a few years, or splurge and get the best of what your money can buy, packed with future-proof components. All depends on your preferences and budget  in getting the best gaming PC.

To help you out, we have curated a list of the best gaming desktop PCs available in the market, all of which we’ve interacted with and reviewed ourselves. The list covers machines from popular manufacturers like Alienware to custom-builders like CYBERPOWERPC, and this guide covers a wide array of use cases. 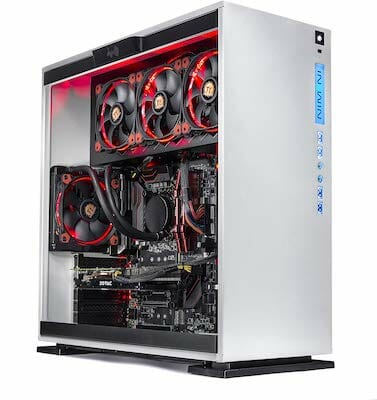 For most gamers, budget plays the biggest role when shopping for a gaming desktop. While that’s true, there are other considerations that can help squeeze value out of your purchase.

Here are the best gaming PCs you can buy right now. In the list, you’ll definitely find one to match your gaming appetite and budget.

The Corsair One has been one of the best gaming PCs ever since it came into the gaming scene, and the Corsair One PRO i180 takes competition to the next level with the highest of specs around, and price as well. With a twelve-core Intel X-Series processor and an Nvidia Turing graphics card, this PC can handle 4K at the highest settings, but comes in a chassis that’s not much bigger than your average gaming console.

It’s pricey – in fact, one of the most expensive around – but with that much power it has to be. Yet, it’s certainly worth every penny if you’re looking for a small form factor machine without cutting corners. It makes it to the top of our best gaming desktop 2019 list for superb performance, sleek design and unmatched power for modern AAA games. 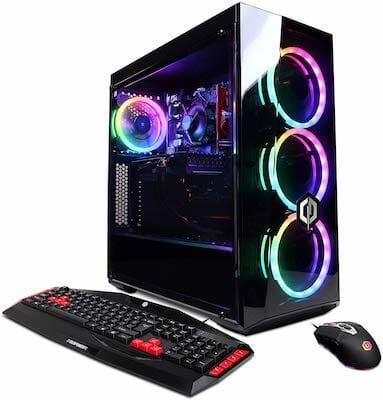 The days of building own PCs with custom parts may soon be behind us. The 2019 edition of the CYBERPOWERPC Gamer GXiVR8060A8 takes a simple premise and adds a few upgrades: a gaming desktop from an OEM with standard parts, but now with a new chips, graphics and reasonable price.

It packs standard parts and tower, meaning you won’t have issues upgrading this unit, but CYBERPOWERPC’s decision to add a transparent glass side panel means that major upgrades will be easy as one would hope.

Without the unnecessary need to build your own rig from scratch (you might end up spending more), you can ultimately depend on the choices that CyberPowerPC made. With this Gamer, you’re getting a handsomely designed, VR-ready system that packs ample performance to get you started.

HP always has something for everyone – whether you’re a casual gamer on a budget on a pro-gamer willing to shell bucks for a souped up rig – you’re well covered. With the HP Omen 880, you’re getting one of the best PCs to hit the streets, with incredible features alongside an easily upgradeable and highly customizable chassis set in a tool-less design

Th2is gaming PC definitely stacks well against the most powerful gaming machines on the market, but cost fairly less as compared to similarly configured rigs. Need we say more? How about that stellar RGB lighting? 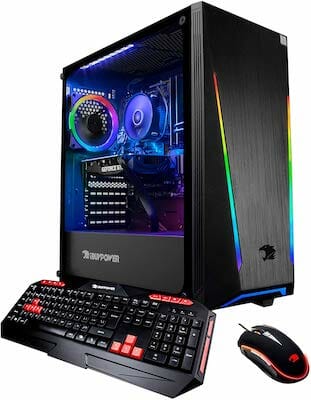 Tricked out gamer for the enthusiast gamer

How much power do you need for esports? Last time I checked, some PC gamers were playing at 1080p or less, but iBUYPOWER Trace line gills with up to an Intel Core i9-9900K CPU and Nvidia’s GeForce RTX graphics card. Certainly, a machine like the iBUYPOWER Pro Element 047i is branded for high-end gaming, for along as you can afford it. If you have a modest budget, the new iBUYPOWER Trace2 9250 is something you should be looking at.

It’s billed as a gaming machine, but its’s a powerhouse you can use for just anything. For around one grand, you get some of the bets pack-in peripherals we’ve seen in a very long time. For the price, it performs as it should, and comes at a sweet price considering the components inside. The only thing you’ll miss here are the joys of building your own, if that’s your thing. 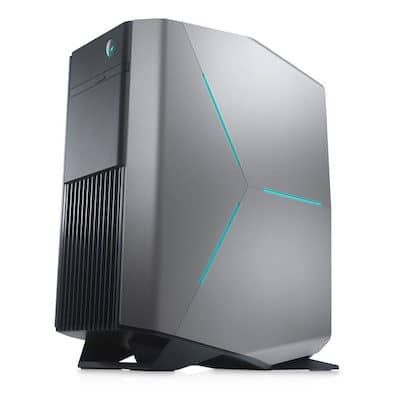 An overclockable beast for 4K gaming

The Alienware Aurora is among the most easily upgradeable gaming PCs out there, thanks to a unique internal design that allows you snap the power supply and swap out the GPU, storage and RAM without lifting a screwdriver.

The new Aurora R8 adds support for a Turing Nvdia RTX 2080 graphics, and the system’s slick backlighting can be customized in all kinds of ways via the Alienware Command Center app.

If you’re in the market for a gaming PC that’s ready for today’s most demanding games and is readily future proof for tomorrow, the Aurora R8 is as good as it gets. it easily gets a spot in the best gaming computer hall of fame for its power and upgradeable chassis design.

It doesn’t look the part, but plays well

The HP Pavilion 790-0020 is an entry-level gaming PC, that is better suited for the graphic artist more than it is for a budding gamer. Still, it can do both. For the creatives whose needs are primarily video and media creation, audio encoding and consumption, this Pavilion is an excellent choice. When not playing, the 8th Gen. Intel Core i5 processor and Nvidia GeForce GTX 1060 will get you playing some of your modern titles without much fuss.

This system is what you’d describe as a high-end multimedia PC (that was almost six years ago), nowadays they simply call them mainstream desktop PCs. Of course, the HP Pavillion 790 comes with features that you couldn’t find at this price range a few years back, including a dedicated GPU, a peppy CPU chip a solid-state drive (SSD) storage option. If you’re looking at replacing an aging laptop or a $3000 tower and not spend much, you can as well start here. 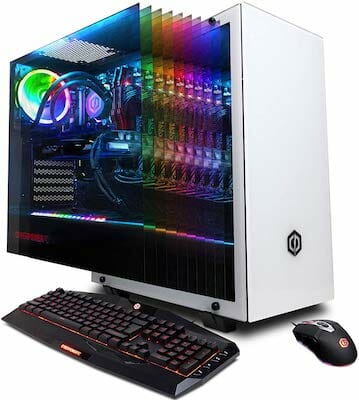 Ease of use meets a pretty chassis

Some gamers want unbridled muscle for modern titles and productivity. The CYBERPOWERPC Gamer Supreme SLC10220CPGV2 fills that role nicely. However, the size and price may be a concern, but when you look at the components and feature set, you’ll appreciate everything in this liquid cooled rig.

At its not-so-affordable starting price, the CyberPowerPC Gamer Supreme gives you Intel’s updated 9th-gen Core i7 processor, alongside Nvidia’s GeForce RTX 2080 Super graphics card – over last year’s base RTX 2080 graphics card, meaning that it can be used as a PC for high-end gaming and professional creatives.

It offers liquid cooling in an appealing aesthetic and a design that gives you more options to configure your desktop. This liquid-cooled gamer stands out as an excellent option for anyone seeking something personalized out of the box. 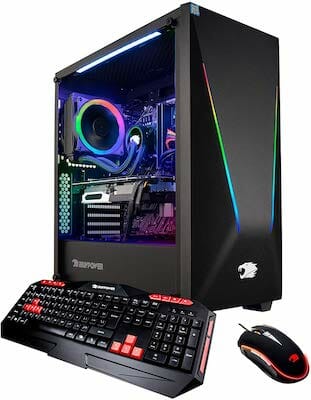 Any gamer would enjoy its power, but it’s beautiful, easy access chassis, and top-notch components are aimed at the esports world and those who don’t move their towers often. 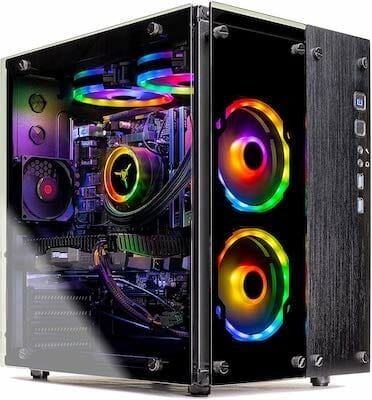 This Mini-monster is definitely worth of its moniker as it boasts a small chassis (at least by gaming standards), but boasts lots of power…more than enough, in fact for most gamers’ needs. When you’ve the money for an upper-tier configuration, you’ll get a sure powerhouse. Also, budget minded buyers won’t have to settle for gameplay at medium settings, the RTX 2060 Super version handles 1080p gaming pretty well.

Still, there are lots of aspects to love about the Legacy Mini. It offers a smooth experience in day-to-day tasks, multitasking and best frame rates in gaming. All of this make it part of the best gaming pc 2019 wish list, especially if you prefer a bit of gamer theme on the design, then the Legacy II is a miss. But if you’re more interested in performance and gaming muscle, the AMD processor and RTX 2060 graphics card won’t let you down.

Best for work and play

Do you prefer a sleep gaming PC? One that gets you into gameplay with an unassuming design, the Dell XPS Tower is what you really need. It packs powerful gaming hardware into a sleek-but-plain chassis, so no one will know you’re not using it for work. The Dell XPS 8930-740BLK Tower comes with a six-core CPU and a capable GTX 1050 Ti that will get you play modern titles at 1080p.

The XPS tower will handle basic gaming just fine, but Dell lets you customize your rig to include the latest CPU and GPU chips. An upgraded version will run you a few bucks more, but there are lots of options in between, including 4K and VR-ready configurations.

The case is surprisingly compact, but still boasts good connectivity, including USB 3.1 ports and the tool-less chassis makes for easy upgrades. If you want a gaming PC for work and play, the reserved Dell XPS Tower line is a great option.

Want more suggestions? Check out our list of the Editors’ Choice 2019

Need something for college? Read our Best Laptops for College 2019

On a tight budget? See our Best Laptops under $500

Fancy a desktop? Take a look at our Top picks for Gaming Desktop PCs in 2019

Something for work and school? See our Best Laptops Under $1000

The Best Laptops for College