The CyberPower Gamer Master GMA1400A is a pre-built gaming PC that of offers enough raw power to run most modern titles at 1080p resolutions and high settings without sacrificing frame rates. 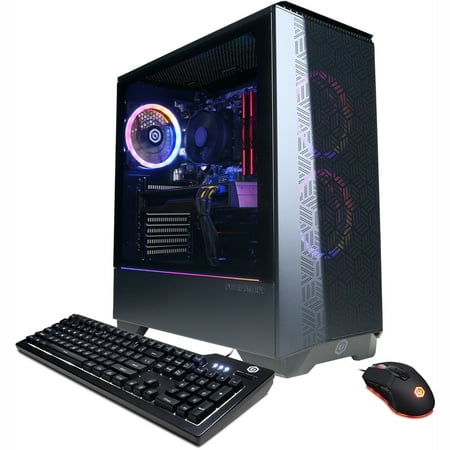 Let’s say you want a high-performance pre-built gaming desktop computer, but don’t want to miss on the extras and loads of options that DIYers building their own gaming PCs have at their disposal. The CyberPowerPC Gamer Master GMA1400A gives you the best of both worlds at a very reasonable price. This gaming PC offers a staggering among of customization options, from fans and decals all the way to the very case you might want to wrap it all up in down the road.

Plus, with support for the latest AMD Ryzen CPU and Nvidia’s new GPU – building the GMA1400A into the ultimate 4K and VR powerhouse is a breeze. If you’re looking for one of the best gaming systems at a reasonable price that you can upgrade later into exactly (and I mean exactly) as you see fit, the Gamer Master GMA1400A makes for an excellent option.

The Master GMA1400A uses the same standard tower as its sibling, the Gamer Xtreme, except for a few tweaks to accommodate the different power supply units. The RGB-lit casing stands at 18.7 by 8.2 by 18.5 inches (HWD), all black brushed aluminum. The front panel is a solid white cover with a Cyber Power PC logo on the lower flank, a move away from the three concentric circles in its predecessor from last year.

The upper panel host a couple of quick-access ports recessed to the right-front side, and the rest of the panel is made of parallel lines, save for a grilled vent that lets you view the interior components and lighting from the top. On the left side is a near-full window made of tampered glass, which gives you a perfect view of the interior components. Looking at the case you’ll realize that it isn’t a small form factor, but it happens to be on the smaller side of registered trademark traditional towers.

The system doesn’t have an optical drive, which is fine given that these days you occasionally need to play from DVDs, as most PC games can be downloaded from digital services like Steam and Origin. Plus, having one on the front would be a scratch on the case’s stylish austerity. As it is, there are easy-access ports on the top panel (towards the front): two USB 3.1, a microphone and headphone, and a Reset button.

On the back, it’s a completely different story, it’s there you find the rear panel ports: two USB 2.0, four USB 3.1, one RJ-45 Network Ethernet, and an Audio 7.1 channel. The new Nvidia GeForce GTX 1660 graphics card also includes one HDMI port and DisplayPort 1.4 for multi-monitor setups. Also bundled into the package is an RGB 7 Colors gaming keyboard and mouse, alongside 802.11AC Wi-Fi for wireless connectivity.

The CyberPower PC Master GMA1400A is powered by a Ryzen AMD Ryzen 5 3600, 16GB RAM, and 512GB PCIe SSD, the CyberPower Gamer Master never slows down under heavy multitasking. You can download a game, hop between a dozen browser tabs, run a full system scan, and fire up a few twitch streams all at once. If you’re paying for an hexa-core Ryzen 5 desktop, you should expect no less than top-end speed, which it delivers across all spheres.

For general productivity/media creation, it is among the fastest AMD-powered systems you can find around this price range and the over 500GB SSD lets you store your files with ease. It beats most newcomers in multimedia tests including Photoshop, making it a big deal for video encoding and picture editing. It leads the pack for daily productivity in such a dominant fashion and manages to stay right up there among the best in class, though it can’t match some recent releases such as the SkyTech Prism II with Nvidia Geforce RTX 3080 Ti 12 GB.

The productivity capabilities above are helpful to measure the general processor aptitude, but it’s hard to beat full retail video games for judging a machine’s gaming credentials. Far Cry 5 and Shadow of the Tomb Raider, are both modern AAA, high-fidelity titles that can be used to illustrate how a system fares on real-world video games at different settings on GPUs such as the GeForce RTX 3070. These two games are run on the maximum graphics-quality presets – Ultra for Far Cry 5 and Very High for Shadow of the Tomb Raider, played at 1080p, 1440p, 4K resolutions.

All these tests are meant to identify the sweet spot of visuals and smooth playability for any given system, with the results provided in frames per second. The different presets are based on the fact that Far Cry 5 is DirectX 11-based, while Shadow of the Tomb Raider can be run on DX12.

In the case of the CyberPower Gamer, targeting a system in this price range means you’re most likely looking to play at full HD (1,920 by 1,080) resolution. Again, not only are 1440p or 4K monitors more expensive, but so is a GPU like the GeForce RTX 3080 that will drive games smoothly at those resolutions. As such, our ideal target is 60fps and the Blaze II easily clears that bar with room to spare for more strenuous moments during gameplay.

If your monitor refreshes over 60Hz – can as well consider the Sceptre C248B-144RN or the MSI Optix MAG24C both with a 144Hz refresh rate; the extra juice of the 1660 Ti is the way to go. This GPU replaces last year’s GTX 1060, meaning it is VR-Ready so it can run your virtual reality headset (HTC Vive or Oculus Rift) with ease. As you can see, 1440p is much more taxing (unless you’re okay with 30fps), and I wouldn’t recommend 4K on this machine.

This is a major investment, so power protection or maybe a battery backup can come in handy. Luckily, CyberPowerPC offers the PFC Sinewave range of backup systems that you can buy separately to safeguard your gaming rig.

The Gamer Master GMA1400A is a pre-built gaming PC that offers enough raw power to run most modern titles at 1080p resolutions and high settings without sacrificing frame rates. Above that, it’s more of a platform that lets you build exactly the kind of PC you need for a fair price.

With its loads of fan and aesthetic options and support for the highest-end AMD Ryzen and Nvidia GTX graphics cards, it’s easier to build the CyberPower Gamer Master GMA1400A into a modest gaming or a VR workhorse.