The CYBERPOWERPC Gamer Xtreme VR GXiVR8060A2 is a VR-Ready gaming PC, with an exciting feature set, for much less than the competition. It is a system you should seriously consider if all you need is a well-designed PC that offers 1080p gaming prowess, and solid productivity performance when not playing. 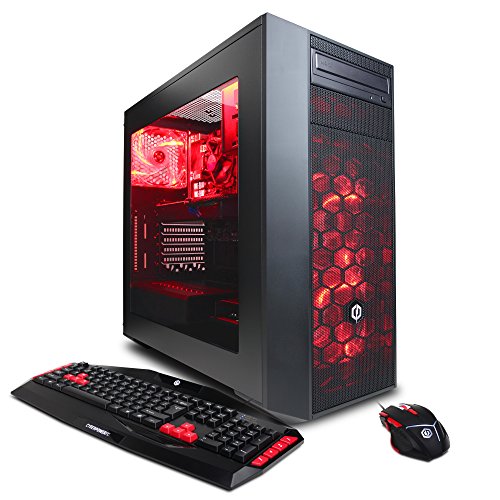 As a PC gamer, I have built a couple of personal gaming computers, and now consider it a rite passage for any serious gamer. But, its sometimes ‘financially’ wise to have someone else do all the work. The CyberpowerPC Gamer GXiVR8060A2 is one of the pre-built rigs, that is affordable, but muscular enough to satisfy any PC gamer’s needs, with an aggressively designed interior and exterior, a solid hardware array, and is easily expandable.

We first reviewed the CyberpowerPC Gamer GXiVR8020A2, in March, and really liked the power it had to offer, but its AMD Radeon RX 480 was slightly behind the competition, especially those fitted with Nvidia’s GTX 1060 GPUs. In the newer iteration, CyberpowerPC throws in the latest Pascal-based Nvidia GeForce GTX 1060 (3GB) , that will likely take on AAA titles effortlessly. Of course, at a fair price.

The Gamer GXiVR8060A2 is built into a fairly large tower desktop body that’s painted with a black panel, with red LED lighting on the front, sides, top and back panels. The case is large, measuring 21.6 by 9.2 by 20.2 inches (HWD) and weighs 32 pounds, so you’ll need a lot of space for it on top of or underneath your desk.  It is bigger than the CybertronPC Titanium that measures 19.7 by 8.3 by 19.4 inches (HWD. The case looks rather commonplace, like a case you’d find online for a few bucks, but it has a CyberpowerPC logo on the front panel.

The front, top, back and side panels are perforated for airflow and they also allow for the RED LEDs to shout ‘gamer’, with a tray-loaded Blu-ray writer and space for an additional drive near the top of the system. An easily removable panel covers the extra drive bay, which is more convenient than other towers that require you to disassemble the case to install the drive. The power button and a few ports are set on the tapering top-section of the front panel for easy access even when it’s under the desk.

The top panel has a pair of USB 3.0 ports, a headset jack, and a place to plug in your microphone. On the back, you’ll find a wealth of connection options, including two USB 2.0 ports, a PS/2 mouse/keyboard port, four USB 3.0 ports, an Ethernet port, and surround-sound audio ports. Video outputs are three: HDMI, DVI and DisplayPort, meaning that up to three monitors can be connected at the same time. The system lacks Wi-Fi and Bluetooth wireless connectivity on-board, but it comes with a USB Wi-Fi adapter.

The case allows you to add more SATA or USB devices, and there are two open DDR4 DIMM slots in case you need to expand the system memory. This is quite impressive as you can add more memory as the motherboard supports 64GB of DDR4 memory (16GB x 4), so you can easily upgrade the memory down the road. If you need to add a snappier SSD down the road the Cooler Master MasterBox 5 PC case has front and rear mounting points that support such expansion. It comes with a 600W power supply, in fact, typical for the price range which works well with the standard ATX power supply used.

Not that you’ll need a lot of upgrades right away, since the system comes with 8GB of memory, a 120GB SSD for windows and programs, and an extra 1TB 7200rpm hard drive for storage. Compared: the CyberpowerPC Xtreme VR GXiVR8040A2 comes with a 128GB NVMe M.2 SSD+ 2TB, 7,200rpm SATA hard drive for data storage. That’s enough system memory for any current AAA game, as well as enough storage space for thousands of hours of entertainment, including games and video downloads.

Its not always that you find a system that rings high-end components, but remains insanely affordable. The Gamer GXiVR8060A2 sweetly balances power and price, than most of its competitors, and its perhaps its main selling point. The main highlights here include: a seventh-generation Intel Core i5-7400K, a 3.0 GHz quad-core processor; 8GB DDR4 system memory and a GTX 1060 3GB  Video Card. This is a fairly-better graphics card than what you’d find in the Core-7 powered CYBERPOWERPC Gamer Xtreme VR GXiVR8040A2, which gives it more power to multitask. On a feature-by-feature basis, the system is capable of playing even the most demanding of games in ultra-settings. For instance, this unit will clock +60FPS on Battlefield at native resolutions. The same is expected for most modern game titles including GTA 5.

Apart from gaming, the system muscles-up well on other demanding tasks. If you’re into ripping movies or creating digital content, you’ll get a handsome transcode speed of 40.0 FPS and above. Not bad for a PC of its price, as you need to remember that this is a quad-core processor without hyper-threading. Apparently, this is one of the best you can get currently for the price. It comes with Windows 10 Home 64-bit pre-installed.

The Nvidia GeForce GTX 1060 Graphics card inside supports DirectX 12 and is VR ready, so this system should last a number of years without needing major updates. Bundled in the package is a wired-mouse and keyboard but you’ll have to buy a monitor separately, I tested it using the 23-inch Acer R240HY and the experience was awesome thanks to the full HD resolution support.

Even with the nice design, you’re still going to have some geeky friends tell you that they’d put together a similar system for themselves for a lot less money —never mind that, the individual components will cost more, and it would take a couple weeks before they can pin it this neat, tested and qualified for use. We didn’t like the fact that it doesn’t have Bluetooth and there is no PCI-e x16 slot for future expansion, but those are not deal breakers for an otherwise superb gaming rig.

A Shoo-in for PC Gamers

As a bang-for-the-buck buy, the CyberpowerPC Gamer Xtreme GXiVR8060A2 deserves the honors. It meets the performance demands for budget gaming desktops, and it affords to check all the boxes of what you’d need from such a system. If you pair it with a full HD monitor,  like the 23-inch Acer R240HY, you end up with an amazing desktop PC for much less.

The GeForce GTX 1060 card also has the video outputs you need to run VR setup as the DisplayPort can be routed to your monitor and the HDMI port gets connected to the VR headset. The fact that it offers solid VR potential at 1080p, and goes ahead to offers exquisite processing capabilities, never seen at this price range, makes it a prime choice for midrange gamers, and bargain hunters alike.