On one hand, the CyberpowerPC Gamer Xtreme GXiVR8080A8 is fantastically built, extremely powerful, and nice to look at but offered at a very competitive price over similarly configured gaming desktop PCs.

CyberpowerPC is one of our favorite boutique manufacturers and with the high-spec system it put out this year in the form of the 2019 Gamer Xtreme GXiVR8080A8, it’s easy to see why. Our review unit is a beautifully designed and built tower that has been packed to the gills with the highest professional-grade parts, including Intel’s brand-new performance beast, the Core i9-9900K and Nvidia’s RTX 2070 super (8GB) GPU.

Only professionals with extremely heavy workloads need this much power, but the wide range of component options and a reasonable price means gamers and those with modest duties can grab tis rig and grow with it.

On looks, the Xtreme GXiVR8080A8 maintains the same design CYBERPOWERPC has been using since 2017’s Gamer Xtreme Series. While we’d love to see a new design, this isn’t necessarily bad, given that the standard tower is built to allow gamers easy access for future upgrades, the LED-lit design is beginning to show its age in the wake of minimalist, yet powerful desktops, like HP’s Omen Obelisk or Dell’s Inspiron.

The front panel is plain glass with a black background and a transparent side panel with a pair of LED concentric circles and another one on the rear fan panel. The other lighting is on the internal cooling fan with a CYBERPOWERPC logo pointing towards the transparent side glass panel. Both the bottom and rear panel have ventilation holes, as does the top. The glass window not only helps showcase the technology inside like liquid cooling compartment and LED backlighting, but also add visual interest.

You’ll appreciate the port variety on the front of the Gamer Xtreme GXiVR8080A8. The top is home to two USB 3.0 Type-A ports and separate headphone and microphone jacks. Around the back, there are another six USB 3.1 ports, two USB 2.0 ports, ready for peripherals and external storage, as well as an Ethernet jack, a variety of audio jacks. On the RTX 2070 Super graphics, there is a single HDMI port and a pair of DisplayPort inputs for extending your display. Wireless connectivity comes in way of 802.11AC Wi-Fi. Also bundles into the package is a gaming keyboard and mouse.

It is easy to get into the Gamer Xtreme, since the glass panel covering the components is removable with four simple hand screws. When that’s removed, you have access to the internal components that are held in place by swing out hinges that let you replace the parts easily. All said, the GXiVR8080A8 is a well-designed desktop, even if it’s not exactly a space saver.

The Intel Core i7-9900K is no slouch, not especially when its twinned with 16 GB of RAM, a 1TB PCIe-NVMe SSD. That makes the Gamer GXiVR8080A8 a heck of a workhorse when you’re not using it for gaming. Though CYBERPOWERPC bills the Gamer Xtreme as a gaming PC, it’s possible for small business owners and home users to adopt it for productivity given the machine’s high-end processors and graphics.

It will certainly complete intensive tasks such as video encoding, within a very short time – in some cases in just under 80 seconds, over the 124 seconds you get from the HP Omen Obelisk’s 8th-generation processor on the same task. Again, the GXiVR8080A8 ships with a speedy 1TB solid state drive that will house all your larger files. The drive and RAM are upgradable should you find the need for more space to store your documents, photos, videos, and game files.

Thanks to an Nvidia GeForce RTX 2070 Super, the Gamer GXiVR8080A8 is capable of gaming at the highest settings without much hassles, as well as enabling ray tracing in select games. Back in October 2018 when the Nvidia Turing line was released, it promised stellar performance coupled with ray tracing in games. And, while some of the graphics in the line delivered fantastic gameplay, like the Nvidia GeForce RTX 2080 Ti, some mid-range cards, particularly the RTX 2070 came off rather subpar.

With the RTX 2070 Super graphics card, Nvidia is here to course correct a little bit with the newer GPU, promising much stronger performance in this edition, by making it the already successful Nvidia Turing architecture more available to the masses. It takes the RTX 2070’s 2,304 CUDA cores and bumps everything up to 2,560 and also builds on higher clocks with a 1,770MHz boost clock. The only thing that remains the same between the two is the memory, that is constant at 8GB, but the newer iteration features more RT and Tensor Cores, and is rated for better ray tracing performance at 7 Giga Rays.

The GXiVR8080A8 plays the Hitman 2 (2018) benchmark (ultra-settings) at 81 fps in FHD, tying the Trace 9230 and beating the average. The frame rate dropped to 61 fps in 4K, just below the gaming desktop average and MSI’s machine.

On Shadow of the Tomb Raider (highest settings), the Gamer GXiVR8080A8 hits 109 fps in FHD and 43 fps in 4K, falling just above the gaming desktop averages (94 fps and 34 fps, respectively) but only below the Vengeance in terms of our comparison group.

On the Grand Theft Auto V (2015) benchmark (very high settings), the Gamer Xtreme runs at 140 fps in FHD and 102 fps in 4K. The former number is higher than average, but the latter is lower.

The Xtreme GXiVR8080A8 earns a perfect score of 10 on the SteamVR performance test.

As always, high-end configurations of specialty desktops are a bit difficulty to review definitively. On one hand, the CyberpowerPC Gamer Xtreme GXiVR8080A8 is fantastically built, extremely powerful, and nice to look at. On the other hand, the average consumer is not dropping anywhere north of one grand on a desktop, and these fully pumped-up configurations are not cut for most people. CyberPowerPC will let you configure a much less expensive version of the same desktop, something like the CyberPowerPC Gamer Xtreme GXiVR8060A8, and you’ll get the same build quality and performance.

However, for the seasoned gamer or IT manager, or an individual professional, shopping for a PC that is as powerful as it gets to crush a demanding workload at a great price, you won’t be disappointed by the CyberpowerPC Gamer Xtreme GXiVR8080A8’s build or performance. The new Ryzen 9 3950X may outpace the Core i9 used here, but the Intel chip’s raw power and potential make it a good fit for most budget-conscious hardcore users. 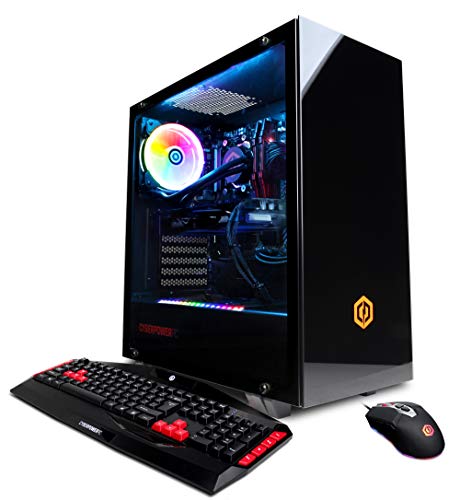