The CyberPowerPC Gamer Master GMA890A is a pre-built gaming PC that can play most games at high settings and still run your productivity tasks with ease, at a great price

If you’re on a budget and can’t or can’t gather the requisite parts to build a gaming PC, there are plenty of options. The CYBERPOWERPC Gamer Master GMA890A is one such option, that combines an AMD Ryzen 5 chip with Nvidia GeForce GTX 1650 video card to deliver the best playability on 1080p games at the best frame rates.

The Gamer Master’s design is great, picking from its predecessor, the CyberPowerPC Gamer Supreme that we reviewed last year, but instead of a plain front panel, it adds an RGB fan on the front bottom. Otherwise, everything else including the tempered glass side panel, RGB lighting on the interior fans, and port selection is all too familiar. CyberPowerPC’s logo is printed above the breathing-LED fan, and you can easily see the look of a gaming PC.

Also bundled into the package is a basic gaming keyboard and mouse, alongside 802.11AC Wi-Fi for wireless connectivity.

There are easy-access ports on the top panel (towards the front): two USB 3.1, a microphone and headphones, and a Reset button.

On the back, you have a plethora of ports for all your components, including two USB 2.0, four USB 3.1, one RJ-45 Network Ethernet, and an Audio 7.1 channel. The Nvidia GeForce GTX 1650 Super graphics card also includes one HDMI and DisplayPort 1.4 for dual-monitor setups.

Because the Gamer Master has lots of configurations that are not very distinct, it’s hard to generalize the performance of this gaming PC. For this review’s sake, therefore, we’ll focus on our review unit, the Master GMA890Ae, which, while souped-up, isn’t the most expensive option in the Gamer Master series.

It features AMD’s Ryzen 5 3600 processor, 16GB memory, and a 512GB PCIe-NVMe SSD plus 1TB hard drive, which makes it a strong productivity machine alongside gaming.

Our review model of the CYBERPOWERPC Gamer Master comes with an Nvidia GeForce GTX 1650 Super (with 4GB) graphics card, and there are other pre-built models on the market with AMD Radeon RX chips. You may not play every game on its highest settings as you would on, let’s say an Nvidia GeForce RTX 3060 or GeForce RTX 3080, but these graphics will get the job done for many enthusiast gamers. You can play Control on high settings, and it will hover around 40 and 50 games per second (fps), and similar games pay well, too. The five mid-size fans are not too loud, in their attempt to cool the whole case.

As we see many midrange pre-built flouted in the market, we’ve reviewed quite a number and we can easily draw comparisons in both pricing and gaming performance. The SkyTech Archangel 3.0 and HP OMEN 25L are excellent alternatives, both featuring Nvidia’s RTX 3060 (12 GB) graphics card for a few dollars more.

Compared to the GTX 1650 Super graphics, the RTX 3060 delivers between 13-25 fps more on most games, and that justifies the extra dollars you’re spending. If you need a future-proof gaming rig at a reasonable price, both the SkyTech Archangel 3.0 and HP OMEN 25L offer value that’s hard to beat, now and in a few years to come.

The CyberPowerPC Gamer Master is a pre-built gaming PC that can play most games at high settings and still run your productivity tasks with ease. It does that job well for the price, and I have to hand it to CyberPowerPC; there are a ton of configuration options.

If you’re looking for something future-proof as a starting base to get into the bigger world of PC building, I suggest checking out the SkyTech Archangel 3.0 and HP OMEN 25L, which use a better RTX 3060 graphics card.

But if you’re more focused on having lots of ports and solid out-of-the-box performance, the CyberPowerPC Gamer Master GMA890A will serve you as something you can set up and play with quickly. 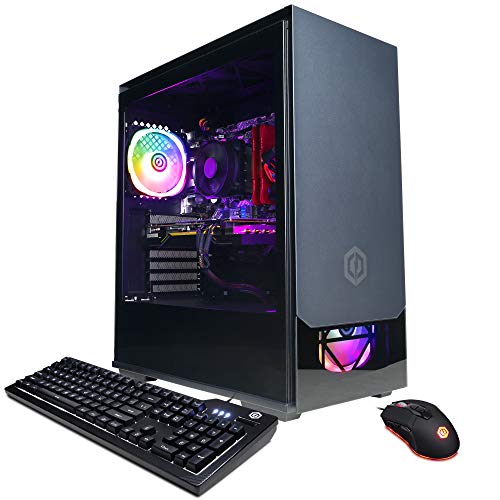