Gaming has become a big part of the PC market these day, but it’s rare to find a truly powerful machine at an affordable price. The CYBERPOWERPC Gamer SLC8040A is just that desktop. It leverages some decent components, like a 128GB SSD+2TB hard drive; a 4GHz Intel Core i7 processor; and, GeForce NVIDIA GTX 970 graphics, to produce impressive performance on most current game titles at relatively reasonable price.

Though it’s an entry-level desktop, it still has the muscle to compete with systems that cost twice as much. For this and other reasons, the Gamer SLC8040A gets our Editors’ Choice award as the best entry-level gaming desktop PC.

Gaming desktops always have one or two rough edges: completely over the top, lurid colors, glaring paint jobs, and sometimes more lights than a Christmas tree; or utilitarian and subdued, at the expense of functional and powerful hardware. The Cyberpower Gamer SLC8040A strikes a refreshing balance between form and function, with a look that has some style, but does scream ‘gamer’ quite so loudly.

The metallic construction of the midsize tower bear vent grilles , accented with LED-lights, both on the front, top, sides and back, all with a splash of color. The front is relatively tame, but it also bears the same vent grille, with a black accent and a ‘Cyberpower’ logo. The case measures a compact 18.5 by 8.2 by 19.9 inches (HWD), and weighs 32 pounds; which is fair considering the power packed inside.

The desktop has a plethora of connectors: 3 x USB 3.0 ports, 6 x USB 2.0 ports, a 3-in-1 Audio port, one PS/2 port and an Ethernet port in the back. If you need to hook up your desktop to multiple displays, you have one DVI port, one HDMI port and one VGA port that will come handy. For your old movies and games, you have a DVD burner that can be used alongside the one available PCIe Gen 3.0 x16 slot, two available PCIe x1 slots, and two available PCI slots.

The system comes with a bundled keyboard and mouse, as well as Windows 10 Home (64-bit) pre-installed and an 800W power supply.  The processor is kept cool with a ‘sealed loop’ system that does not require any maintenance of the system’s cooling fluid.

For storage, the desktop includes a 128GB solid state drive (SSD) to boot from for faster loading, plus, larger 2TB (7,200RPM) hard drive for storage. This is still much more storage than the ASUS G11CD-US008T, which only includes a relatively small 1TB HDD (8GB SSD Hybrid for storage. The Acer Predator AG6-710-70002 offers the best of both, featuring a 256GB SSD and a 2TB HDD, while the Acer Predator AG6-710-70001 goes for a different setup in smaller capacities (128GB SSD and 1TB HDD). The Cyberpower Gamer also leaves thins wide open for upgrades.

Here we’re talking of slots for additional drive bays including, two external 5.25″ drive bays, two internal 3.5″ drive bays, and two internal 2.5″ drive bays. The 16GB memory is also upgradable to a maximum of 64GB through four DIMM slots, though two are currently occupied. This is quite appealing for users who are after buying a system that can grow into something bigger, as opposed to boutique-built gaming PCs.

As mentioned earlier, the Gamer SLC8040A is equipped with sixth-generation 4.0GHz Intel Core i7-6700K CPU on an Intel Z170 chipset, the same quad-core processor used in the CYBERPOWERPC Gamer Supreme SLC8160A Gaming Desktop. On performance, this is way better when multitasking than even the ASUS G11CD-US008T and the Acer Predator AG3-710-UR54, both in the entry-level gaming category. Paired with 16GB of RAM, it’s a surprisingly potent performer ­­­­­­­­­­­ — both for current games and heavy media editing projects.

But gaming desktops aren’t all about CPU performance since graphics prowess presents the other side of the story. Armed with a dedicated GeForce NVIDIA GTX 970 graphics with 4GB memory, the desktop’s performance was quite impressive in our tests. We tested the game with the latest Grand Theft Auto 5, at high-very high settings and we still managed a steady, playable 60 frames per second (FPS); and an equally amazing 65FPS on Dark Souls 3 in ultra-settings.

The tests were run at 1,920-by-1,080 resolution, but with numbers that high, you should be able to get playable performance even if you crank things up to 4K resolution, though you may need to dial back some of the more demanding detail settings.

The CYBERPOWERPC SLC8040A is a well-designed, powerful gaming desktop with speedy performance at a surprisingly reasonable price. It doesn’t stack up to more expensive systems above class, but it still holds its own when it comes extras like an SSD, a roomier HDD, enough RAM and a dedicated graphics card. 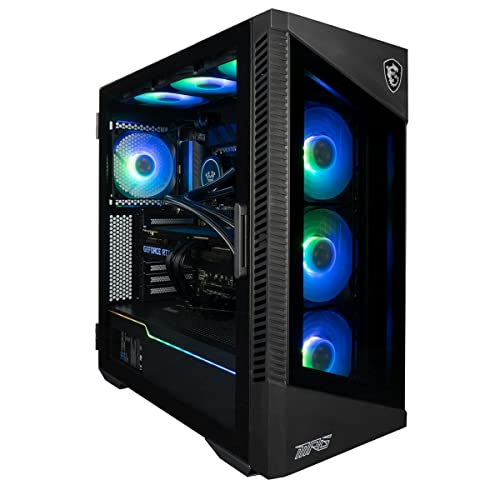 All these make it a good value, especially if you’re working on a budget. It is amazing to see that as components like graphic cards and processor become more powerful, those improvements are trickling down to midrange systems like the CyberPowerPC SLC8040A.

If you’re looking for powerful gaming performance and ample room to grow into something bigger through upgrades, then the Gamer SLC8040A deserves a top-spot in your shopping list. That combination of forward-looking technologies and reasonable price put the system ahead of the pack, therefore becoming our Editors’ Choice entry-level gaming desktop PC.