The CyberpowerPC Gamer Supreme SLC8260A2 is about as straightforward as it gets for a high-end gaming desktop. The look is stylish, and the design is focused almost exclusively on gaming performance.

This gaming rig ticks key boxes on the gamer-essentials list, including a spacious chassis, edgy design with RGB lighting, easy expandability and powerful productivity performance courtesy of the 3.6GHz Intel Core i7-9700K processor. But the price of our review unit is just right for what it offers, topping off its value equation with friendly features like a 1TB solid-state drive and a tool-less entry design with a sleek transparent side panel.

Factor in liquid cooling, good looks and plenty of expansion room, and the Gamer Supreme SLC8260A2 is our new favorite among value-oriented, prebuilt gaming towers.

The CyberPowerPC SLC8260A2 isn’t an off-the-shelf desktop, produced for the mass market. While the chassis and certain internal components are branded by CyberPowerPC, they’re all standard parts with aftermarket equivalents.

Lately, CyberPowerPC has become a common brand in the custom-gaming niche, so we’re not surprised that most parts used inside are aftermarket, and that includes the motherboard and graphics card. You’ll be able to locate most of the parts used here online. That’s part of the allure of getting a prebuilt desktop from a system builder with a notable presence in the market.

Back to the design, this Gamer Xtreme is set on a mid-tower chassis, measuring 18 by 7.9 by 18.4 inches (HWD). It uses a larger Intel b360 Chipset that offers enough space to add components, and is roomy enough for your hands to move around when making upgrades. The system’s internal components are accessible via a removable side panel that’s held in place by thumbscrews, that essentially offer tool-less access.

Once you remove the tinted glass panel, you can now access the motherboard, solid-state drive, RAM and graphics card. The power supply and hard drive are found behind a metal side panel on the opposite side. The tinted glass panel looks clean on the system when switched off, and the trio-of LED rings on the front panel looks even better when the machine is running. All that is accented by excellent cable arrangement, that keeps things tidy and helps with airflow. 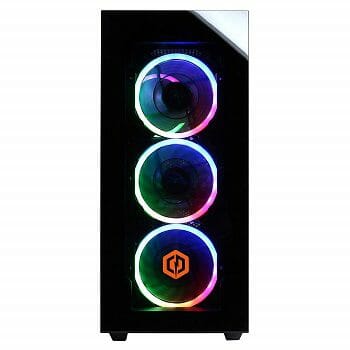 Port selection along the front edge includes separate headphone and microphone jacks, and a pair of USB Type-A 3.0 ports. On the same flank, you also have a power button, a reset button, and a drive activity light up. We’d prefer a flash-card reader in this spot, though. That’s about one of the few conveniences missing here. On the bottom, you have four raised feet with rubber pads to give the Gamer Xtreme some breathing room from the underside.

On the back of the tower, there are other ports including six USB ports, Ethernet jack, two legacy PS/2 ports to accommodate your older mouse and keyboard connections, audio and headphone jacks, and video output ports, including DisplayPort and HDMI connections. 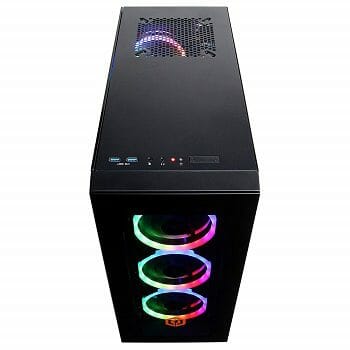 The Intel Core i7-9700K is no slouch, not especially when its twinned with 16 GB of RAM, a 1TB PCIe-NVMe SSD. That makes the Supreme SLC8260A2 a heck of a workhorse when you’re not using it for gaming. Though CYBERPOWERPC bills the Gamer Xtreme as a gaming PC, it’s possible for small business owners and home users to adopt it for productivity given the machine’s high-end processors and graphics.

It will certainly complete intensive tasks such as video encoding, within a very short time – in some cases in just under 80 seconds, over the 124 seconds you get from the HP Omen Obelisk’s 8th-generation processor on the same task. Again, the Supreme SLC8260A2 ships with a speedy 1TB solid state drive that will house all your larger files. The drive and RAM are upgradable should you find the need for more space to store your documents, photos, videos, and game files.

Thanks to an Nvidia GeForce RTX 2070 Super, the Supreme SLC8260A2 is capable of gaming at the highest settings without much hassles, as well as enabling ray tracing in select games. Back in October 2018 when the Nvidia Turing line was released, it promised stellar performance coupled with ray tracing in games. And, while some of the graphics in the line delivered fantastic gameplay, like the Nvidia GeForce RTX 2080 Ti, some mid-range cards, particularly the RTX 2070 came off rather subpar.

With the RTX 2070 Super graphics card, Nvidia is here to course correct a little bit with the newer GPU, promising much stronger performance in this edition, by making it the already successful Nvidia Turing architecture more available to the masses. It takes the RTX 2070’s 2,304 CUDA cores and bumps everything up to 2,560 and also builds on higher clocks with a 1,770MHz boost clock. The only thing that remains the same between the two is the memory, that is constant at 8GB, but the newer iteration features more RT and Tensor Cores, and is rated for better ray tracing performance at 7 Giga Rays. 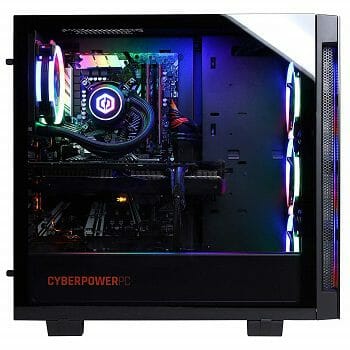 The SLC8260A2 plays the Hitman 2 (2018) benchmark (ultra-settings) at 81 fps in FHD, tying the Trace 9230 and beating the average. The frame rate dropped to 61 fps in 4K, just below the gaming desktop average and MSI’s machine.

On Shadow of the Tomb Raider (highest settings), the Gamer SLC8260A2 hits 109 fps in FHD and 43 fps in 4K, falling just above the gaming desktop averages (94 fps and 34 fps, respectively) but only below the Vengeance in terms of our comparison group.

On the Grand Theft Auto V (2015) benchmark (very high settings), the Gamer Xtreme runs at 140 fps in FHD and 102 fps in 4K. The former number is higher than average, but the latter is lower. The Supreme SLC8260A2 earns a perfect score of 10 on the SteamVR performance test

The CyberpowerPC Gamer SLC8260A2 is about as straightforward as it gets for a high-end gaming desktop. The look is stylish, and the design is focused almost exclusively on gaming performance. For the money, you get a rig that’s outfitted and tuned to compete with more expensive systems. Sure, some of those come with a few extras like overclockable CPUs or minimal designs, but for many shoppers, performance for your dollars is the chief concern.

Some may prefer a simpler look, but for the pro-gamers, the Supreme SLC8260A2 fits in gaming settings and some home-offices better than others. It’s not a cheap PC, of course, but its high-end parts are effective for 1440p gaming and capable of 4K gaming. Add in the support for VR (virtual reality) headsets like Oculus and HTC Vive, and it easy to recommend the CyberpowerPC Gamer Supreme SLC8260A2 to performance hounds of all stripes.