The CyberpowerPC Gamer Ultra GUA3100A is a reasonably priced, well-designed gaming desktop with speedy performance—at least for folks starting on gaming but on a strict budget. It doesn't stack up to more expensive systems in its class, and is missing extras like an SSD, a wireless card, USB 3.0 port, and more memory, but it's a good value.

Most gaming desktop PCs sport a big and bold-looking design, but with its elaborate design, the CyberpowerPC Gamer GUA3100A takes the gaming rig aesthetic to another level. It has looks that shout ‘gamer’, it has beefy hardware we’ve seen trickle down from midrange gaming PCs to budget gaming PCs, making it ideal for enthusiast-level gaming.

Its performance doesn’t quite match budget midrange gaming desktops, but the combination of quad-core AMD and dedicated Radeon graphics still make it a safe bet for playing games, though not every title will work in ultra-settings and Full HD. The Gamer Ultra GUA3100A isn’t quite as fast or as flashy as the CYBERPOWERPC Gamer  GXiVR8020A, but there’s something to be said for buying a nice-looking rig and having some cash left in your pocket.

The Gamer Ultra GUA3100A’s case measures a compact 17 by 7.9 by 17.5 inches (HWD)—at least for gaming PC standards, which is fairly short and slim for the components packed inside. It does weigh 25.1 pounds, relatively heavy for its size, but, as a desktop you won’t be moving it much. Overall, it has a rectangular shape but its angled front panel curves near the bottom with a slight fore-protrusion, adding a little style.

Unlike most desktops, you now have three USB 2.0 ports and audio-ports on left side, while the top deck hosts a DVD burner beneath a front opening plastic cover. Two easily removable panel covers the extra drive bays, which is better than most towers that require to you to disassemble the case to install the drive.

The side panels are open for airflow, while the top is mesh, which provides additional ventilation for the case’s interior. On the panels are red LED lights, the front has mesh strips with red LEDs, with a larger CYBERPOWER logo emblazoned on the front panel, just below the power button. All in all, it’s a departure from the more traditional design in the CyberpowerPC Gamer Ultra GUA880 or the CyberpowerPC Gamer Ultra GUA3400A.

As mentioned earlier, the CyberpowerPC Gamer GUA3100A is equipped with a quad-core AMD FX-4300 processor running at 3.8GHz (turbo up to 4.0GHz), and AMD Radeon R7 240 2GB Video Card. On CPU Mark, the AMD FX-4300 chi scores a paltry ~4600 points, which is way lower than even most 4th generation Intel Core i3 processors (around 5000 points). This means that the Intel Core i3-4160 packed inside the Lenovo H50 delivers better performance. However, for gaming, CPU isn’t one of those factors we’d consider before recommending, and we expected a few concessions to keep the price low.

On the other hand, the Gamer GXiVR8020A’s 2.8GHz Intel i5-6402P processor has a CPU score of 6,775 points, which is quite impressive for gamers, keeping in mind that it can burst up to 3.4GHz in Turbo mode, making it a better performer than the Gamer Ultra GUA3100A.

We hooked the Gamer Ultra GUA3100A up to an AOC G2460PF 24-Inch Gaming display and anecdotally tested the system at ultra-settings. The system returned a playable score of 60 FPS on League of legends (ultra settings; 1920-by-1080), 51 FPS on Minecraft (high settings), and upwards of 60 FPS on Counter-Strike (ultra settings; 1920-by-1080). However, some latest titles were slightly heavy on the system but still playable.

This unit comes with 8GB DDR3 system memory, installed on one stick. If you need to upgrade the memory, there are four memory slots in total, meaning, you can upgrade to a maximum of 32GB. For storage, the system includes a roomier 1TB, 7,200rpm hard drive, though it disappointingly does not include a smaller solid-state-drive (SSD) that the system can use for faster booting, but that would have pushed the price up. Still, if you really need a speedier booting, replace the rotating HDD with a faster SSD.

Connectivity is good… not excellent on the CyberpowerPC GUA3100A. On the downside, it doesn’t include a USB 3.0 port, just eight USB 2.0 ports. Quite sufficient though. Others include Gigabit RJ-45 for Ethernet connection. It doesn’t have a wireless card, so you are safe with a USB wireless dongle like the Edimax EW-7811Un wireless adapter. The video card harbors HDMI, DVI and VGA ports; which means that a 3-monitor setup will work here. For your old media and files, you have an internal DVD burner. Bundled into the package is a mouse and keyboard, which are basic, but capable; though you’ll have to purchase the monitor separately.

The CyberPowerPC Gamer Ultra GUA3100A is a reasonably priced, well-designed gaming desktop with speedy performance—at least for folks starting on gaming but on a strict budget. It doesn’t stack up to more expensive systems in its class, and is missing extras like an SSD, a wireless card, USB 3.0 port, and more memory, but it’s a good value.

The relatively small tower is a bonus if you have limited room on or around your desk, and it’s easy to open up. It’s a good option if you are working on a budget, but the Gamer GXiVR8020A offers a lot more power, and supports VR gaming for both the HTC VIVE with Steam VR and the Oculus Rift VR. Still for those on a strict budget, the CyberpowerPC Gamer Ultra GUA3100A is a bang-for-the-buck buy, and is our Top Pick budget Gaming Desktop PC. 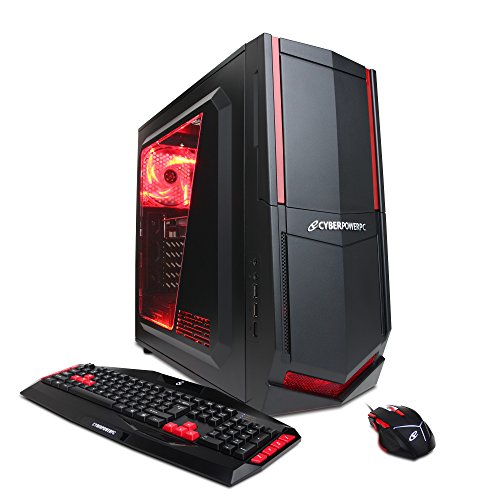