The CYBERPOWERPC Gamer Ultra GUA883 is a gaming PC, with a few drawbacks but its low price and good casual gaming performance make it a good choice, especially for anyone trying their feet in the world of PC gaming for the first time.

Our review unit , the CYBERPOWERPC Gamer Ultra GUA883 is an entry-level desktop computer, with enough internal space to support future upgrades. Amidst the rollercoaster of soaring high-end GPU prices, DIYers have always had alternatives to building own gaming PCs. For the past couple of years, CyberPowerPC’s Gamer Ultra has been our favorite, powered by AMD hardware. Now, CyberPower has refreshed the system with updated AMD components, including a hexa-core processor, and up to a Radeon R7 graphics card.

While the Gamer GUA883 is no Alienware, it has a certain allure to it. CyberPowerPC has a blended a streamlined space-friendly sensibility with a few strokes of gaming audacity. The case is a standard tower column shrouded in a black shell, accented with subtle LED lighting and a sleek tempered glass side window. The bright red internal lighting seeps through out of those glass panels, and looks great from every angle.

The honeycomb back and top grilles gives the light a textured look, depending on your viewing angle. It’s not as elegant as the simple tempered front glass panel, but it’s a touch of originality that’s nice to have in an affordable gaming desktop. One of the benefits of sticking with a custom build from a big boutique-builder like CyberPowerPC is that you can expect a certain degree of creativity and good build quality, which is evident here.

The SkyTech Shadow, a direct competitor to the GUA883, features a very different aesthetic. It’s not quite as audacious as iBuyPower’s Trace 9200 lineup usually is, but it features a glossy black design with a bent front panel, and a thin LED strip cutting through the vertical axis, stretching all the way to the bottom and some units include liquid cooling.

While the Shadow ArchAngel looks chic and a bit understated, the CyberPowerPC GUA883 looks masculine and more like a typical gaming PC. Surprisingly, it doesn’t look like a typical gaming PC. Put the two gaming desktops side by side and you’d never guess that both were the same price. The Ultra gamer looks like a more expensive machine even if it isn’t. The included gaming keyboard and mouse make this an even better deal. 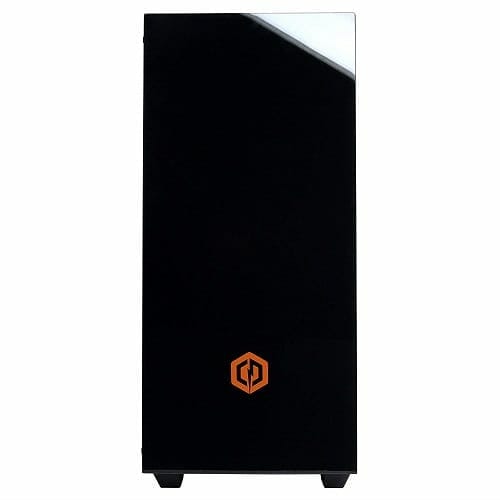 Around the back-side of the Gamer GUA883, you’ll find a standard array of ports – six USB 2.0 ports, an Ethernet port, five audio input/output jacks, and one VGA, one DVI and one HDMI on the video card. On the front-side of the top panel of the PC there are two USB 3.90 ports more USB-A ports, a headphone combo.

There is an 802.11ac Wi-Fi adapter, but you don’t get an optical drive nor does it have a USB-C port. That’s a lot of ports, and enough variety to ensure that all your peripherals are connected – at least for now. While USB 2.0 isn’t going anywhere soon, it would’ve been nice to see a few of those slots dropped to pave way for even a single USB-C port. Also bundled into the package is a standard gaming mouse and keyboard. 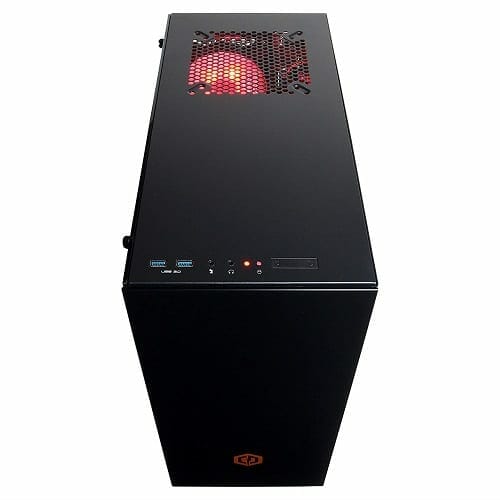 Equipped with a midrange six-core AMD FX-6300 processor clocked at 3.5GHz, the Ultra GUA883 is an enduring budget machine meant for modern 1080p games. It’s not going to outrun its Intel competitors who are around four generations ahead, but this boxy guy has heart – and an enticing price tag. On its own, the AMD FX-6300 retails for around $60, which makes it one of the most affordable modern six-core processors on the market. Still, the company offers other beefier gaming chips, like the AMD Radeon RX 5600 XT that is designed for both gaming and intensive productivity.

At launch, it impressed us with its combination of bargain price, impressive multi-threading performance and incredible overclocking chops. In fact, it would push the limits to leverage the same CPU performance as the then quad-core pro, the i5-3570K. Since then, Intel has pushed onto to new 9th-gen processors that can only be matched by AMD’S Ryzen 3rd generation, but the old AMD FX-6300 still persists among budget gamers.

With a score of 1407 on single-core performance and 6388 average CPU Mark, the AMD FX-6300 lands behind the Intel Core i5-3570K with an average score of 7174 points. That’s not too much of a surprise considering that comparable Intel processors usually outclass their AMD rivals, yielding better performance in exchange for higher prices.

The important thing here is the margin of the Intel chip’s prowess, especially when running on Windows 10 Home operating system. While it is well ahead of the AMD FX, it’s not much ahead that you’d notice a performance gap when gaming, which isn’t typically very CPU intensive. In fact, when you factor price and performance, AMD’s latest Ryzen chips are catching up on some of Intel’s top performers.

So clearly, the Ultra GUA880 is a little behind its Intel-powered competitors – but not much, and that really matters in a gaming machine. Why? Because your processor doesn’t play a significant role in graphical performance. Thus, picking up a capable yet inexpensive CPU is often considered the best route, and the AMD FX-6300 offers stable, reliable performance at a bargain. If you’re interested in getting an Intel-powered desktop, CyberPowerPC now offers the  Gamer Xtreme VR GXiVR8060A6 with the latest Intel Core i5-9400F and Nvidia GeForce GTX 1060 graphics card.

The hard drive should just go

In addition to using cheap processors, manufacturers can keep prices down by opting for slower, cheaper hard drives like the one inside the Gamer Ultra GUA883. While it features an expansive 1TB of space, it is painfully slow, we atleast expect an NVMe SSD for storage.

Moving large files will be remarkably slow, and will take time to transfer multiple games. The Gamer Xtreme GXiVR8060A6 comes with a 120GB SSD in addition to the 1TB mechanical disk. We highly recommend it, as it eliminates the bottlenecks of slow hard drive performance. 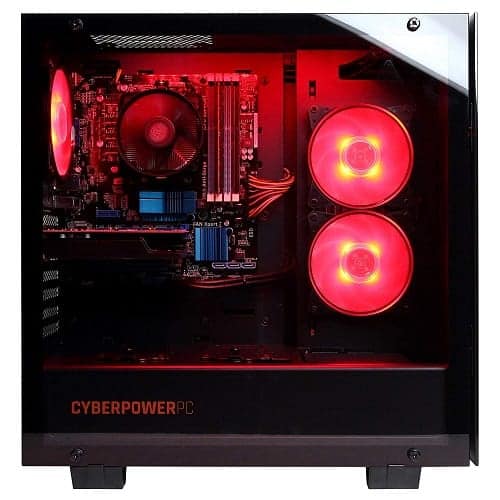 On of the ways CyberPowerPC was able to make the CYBERPOWERPC Gamer Ultra GUA883 affordable was by going with one of AMD’s cheap graphics cards, the Radeon R7, instead of a pricier Nvidia option. The graphics card makes a major part of your gaming experience, so it does matter to see how the Radeon R7 fares against the competition.

Here’s where things get interesting. The 2GB Radeon R7 runs behind both the Radeon RX 570 and Nvidia GeForce GTX 1060 on 3D tests – which retail for around $200, almost three times what you’d pay for the Radeon R7. In fact, the Radeon RX 580 should retail for about the same price, but current market forces, particularly Bitcoin miners have pushed the prices to $600 in some cases. It is not easy to grab an RX 580 by itself, to the dismay of folks looking to build own budget PCs.

For casual gamers, it still delivers good fps at ultra-settings on most titles, but you should not expect GTX 1060 like performance on modern titles. First, you’re going for a budget gaming PC, so you should expect the same feel in actual gameplay, but you have an option to configure the system and throw in a better GPU and Intel’s Optane Memory while at it.

For now, the Radeon R7 can’t promise 60 FPS with all the settings maxed. That is the high-end average, here we’re looking at a budget gaming PC that performs as it should after all. To be honest, there is always something satisfying about the Gamer Ultra, it is pleasantly designed, and has all the utilities and performance that any budding gamer or general user would find convenient for daily productivity.

The CYBERPOWERPC Gamer Ultra GUA883 is a gaming PC, with a few drawbacks but its low price and good casual gaming performance make it a good choice, especially for anyone trying their feet in the world of PC gaming for the first time.

For instance, CyberPowerPC themselves have both the Gamer Xtreme GXiVR8060A5 and Gamer Xtreme GXiVR8060A6, both feature Nvidia GeForce GTX 1060 graphics card, and Intel’s Core i5-8400/Core i5-9400F processors, respectively; offering better gaming scores and support for Virtual Reality (VR) headsets as well. Both of these are good alternatives, but if cost is the main factor, they may not be the most affordable around.

On the other hand, iBUYPOWER offers the N27W8260EX2 for around the same price, with the same AMD FX-6300 processor but a newer Nvidia GTX 1050 (2GB) graphics card. The price difference between the two is almost negligible, but the iBUYPOWER’s superior graphical performance is definitely worth the extra bucks.

Overall, there are many alternatives for cheap gaming PCs to the Gamer Ultra GUA883, but none of them are hands-down when it comes to pricing. The Gamer Ultra takes the honors for a delicate balance of price and performance.

If you’re new to PC gaming, this CYBERPOWERPC Gamer Ultra GUA883 is a great choice. It won’t create a hole in your bank account, but it will see you through a few Major PC game release cycles comfortably.