The CyberpowerPC Gamer Xtreme GXiVR8060A7 is a solid performer with a few drawbacks, but its low price and solid gaming performance make it a good choice.

Investing in a gaming PC can be a daunting prospect, as there’s a lot of options out there, at different price points. Finding a desktop with the speed and versatility to get the most out of the latest games is easy enough, provided you don’t mind spending a fortune. It’s tougher to find one that can do all those things for less a grand, but during our CyberpowerPC Gamer Xtreme GXiVR8060A7 review, we came to realize it just might fit the bill.

Our review model of the Gamer Xtreme features an Intel Core i5-9400F processor, 8GB of RAM, a Nvidia GeForce GTX 1660 graphics card, and a 1TB hard drive. Build with Nvidia’s latest graphics chip —though, not the very best in its class, there are the likes of RTX 2070 and RTX 2080Ti — and clad in a stylish chassis, the Gamer GXiVR8060A7 seeks to offer budget gamers solid and reliable performance.

Let’s see if the newer hardware is up to the task.

Like all pre-built gaming PCs, the CyberpowerPC Gamer Xtreme GXiVR8060A7 features a standard tower chassis fitted with an Intel B360 chipset on the inside. It measures 18.5 x 7.9 x 17.9 inches and weighs 26.3 pounds, which is in the same ballpark as the iBUYPOWER Trace 9220, but fairly larger than the mainstream HP Omen Obelisk or Dell’s Alienware Aurora R7.

If you need to throw in a few upgrades down the road, the larger Intel B360 chipset is the best to have, and offers enough room to maneuver when making upgrades.

A tool-less design makes it possible to upgrade the system at home, with only four thumbscrews holding the tinted glass side panel in place. Once you remove the glass panel, you have access to the motherboard, solid state drive, RAM and graphics card. The other components including the power supply and hard drive are housed behind the metal side panel on the opposite flank.

The tinted glass adds some gaming flair to the overall design, with lots of features to like in the design, including a trio of colors on the front panel and RGB backlighting throughout the case. Cable work is excellent, and the airflow vents are purposely place across the entire chassis. We have seen this design on the CyberPowerPC CyberPowerPC GXiVR8060A5, except for a few interior components. 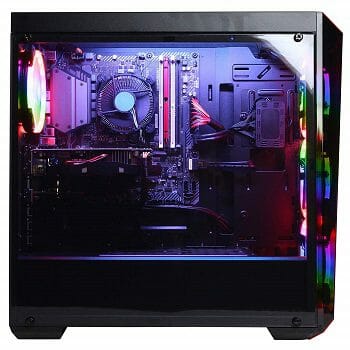 The CyberpowerPC Gamer Xtreme GXiVR8060A7 has lots of ports and they are conveniently located. On the top front panel, you’ll find two USB-A 3.0 ports, audio and headphone jacks, and a power button. Around the back, there are including six USB ports, Ethernet jack, two legacy PS/2 ports to accommodate your older mouse and keyboard connections, audio and headphone jacks, and video output ports, including DisplayPort and HDMI connections.

We’ve seen gaming desktops offer USB-C ports as part of their connectivity array, especially those with the upgraded RTX 2080 GPU. Our review unit maxes at GTX 1660Ti, and for that reason we never expect a USB-C port. That means you’ll do with multiple cables to drive your VR headset, something the RTX cards address with a single VirtualLink connector. Also bundled into the package is a gaming keyboard and mouse. 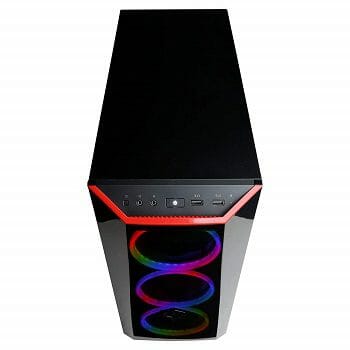 Last month,  in our CyberPowerPC GXiVR8060A5 review, we were impressed by the mid-range PC’s performance and resonable pricing. The newer refreshes everything with a 9th-generation processor and a GTX 1660 GPU over the last year’s GTX 1660. The CyberpowerPC Gamer Xtreme GXiVR8060A7 packs the same specs, only opting for GTX 1660, instead of  GTX 1660 Ti.

It’s not going to outrun its Ryzen 7 competitors, but this value guy has heart – and a killer price tag. On its own, the Core i5-9400F retails for $149.99 at Amazon , which makes it one of the least expensive 9thGen six-core processors on the market. It can handle more threads than its predecessor, the core i5-8400, and has better game support and lower latencies.

In day to day performance, the Gamer Xtreme can handle productivity well, never hesitating or slowing down. Need to have 10 YouTube videos playing while streaming a Hulu Original, or multitasking with 15 Chrome tabs open? This desktop will handle a tensed scenario like that just fine. It easily comes close to the CYBERPOWERPC Gamer Xtreme VR GXiVR8100A, with double the RAM but is powered by an 8th Generation processor. 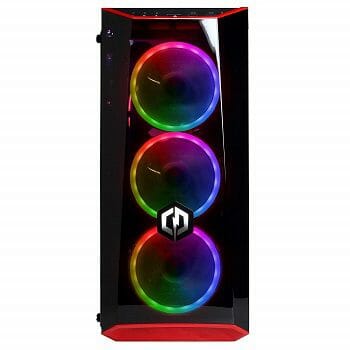 The CyberpowerPC Gamer Xtreme GXiVR8060A7 is billed as a gaming PC, so it better be able to play modern titles. And, it does exactly that! The system comes with Nvidia’s GeForce GTX 1660 (6GB), but you get another configuration the same base model with – the CyberPowerPC Gamer GXiVR8500A, that features a GTX 1660Ti GPU, and all other specs remain the same. Both are capable GPUs, though the 1660Ti will provide you with a significant increase in frame rate.

The unit’s entry-level GTX 1660 graphics card keeps this machine firmly in the consideration of enthusiast gamers, who don’t need newer features like features like real-time ray tracing and deep learning super sampling (DLSS). Giving up these technologies to hit a lower price sounds like a winning strategy for Nvidia.

In fact, the TU116 GPU raises the question of just how low Nvidia is willing to go with its newest Turing architecture. The 1660 speeds things further by incorporating Turing’s improved shaders, a unified cache architecture for adaptive shading that complement video encode/decode acceleration features. The result is TU116 chip that’s leaner but with a list of specifications that emphasizes today’s top titles.

On real-world gaming, it delivers impressive frame rates per second (FPS) than its closest rivals, especially when played at 1080p. For instance, Fortnite played at 1080p (Very High Quality) yields 120 FPS, which is better than the Radeon RX Vega 56’s 91 FPS, while the GTX 1060 maxes at 84 FPS.

The same is replicated in The Witcher 3 Wild Hunt (56 FPS, 62 FPS, 35 FPS) and Warframe (145 FPS, 126 FPS, 88 FPS), respectively played at 1440p, maximum detail.  Given that the GTX 1660 can render most modern games with modest graphics, like Civilization VI and League of Legends, at frame rates above 60 frames per second (FPS), some gamers will indeed appreciate the smooth game play.

The CyberpowerPC Gamer GXiVR8060A7 is a solid performer with a few real drawbacks, but its low price and solid gaming performance make it a good choice, especially for anyone looking to step into the world of gaming for the first time. The CYBERPOWERPC Gamer Xtreme VR GXiVR8060A5 specs made it our favorite last year, butit now gets stronger in the newer model.

When the price starts getting low for robust hardware, the available options begin to diminish. Still, each major manufacturer has at least one desktop in the less $1,000 price point, but finding one with hardware comparable to the Gamer GXiVR8060A7 is tough without crossing that price threshold. The

There’s even a GeForce GTX 1660Ti-based version now available, for a few dollars more. CyberPowerPC offers the Gamer GXiVR8500A with an improved graphics card, but everything else remains the same.

If your budget won’t budge, both the Gamer Xtreme and Trace 9220 are more affordable in their respective categories (entry-level and mid-range, respectively), and offer the best value for both gamers and professional creatives.

Yes. As configured, the CyberpowerPC Gamer Xtreme GXiVR8060A7 eliminates the burden of building your own rig from scratch — in fact, you might end up spending more. That means that for a very reasonable price, you’re getting a well-crafted, VR-Ready system that will remain relevant for a few more years.