The CYBERPOWERPC Gamer Xtreme VR GXiVR8080A2 is a desktop PC with stellar gaming capabilities and enough power for professional media projects, but undercuts its competitors in pricing.

CyberpowerPC has made its name with high-end gaming PCs over the years, putting out some of the best components and other components on the market for much less than the competition. Now, we have the CyberpowerPC Gamer GXiVR8080A2, a premium general-purpose desktop that can do it all – from playing modern games at maximum settings, handling complex multimedia projects to serving as a home workstation.

As configured, it delivers unmatched performance with its overclockable Intel Core i7 processors, a top-tier Nvidia GTX 1080 Ti graphics card and 16GB of memory make it a top candidate among high-end desktop PCs. Plus, you’ll pay almost half what most of its top-of-the class competitors cost, but you are getting more computer than you’re paying for.

This year’s Gamer Xtreme uses the same standard tower case as its siblings from this year (of course with a few tweaks), and I’m a big fan. It stands at 18.6 by 8.5 by 18.5 inches (HWD), all black brushed aluminum. The front panel is half-solid black cover, and the other half is a glass panel that reveals a trio of concentric LED circles. The upper panel host a couple of quick-access ports recessed to the right-front side, and the rest of the panel is made of parallel lines, save for grilled vent that lets you view the interior components and lighting from the top.

On the left side is a near-full window made of tampered glass, and gives you a perfect view of the interior components. Looking at the case you’ll realize that it isn’t a small-form-factor, but it happens to be on the smaller side for traditional towers. For size comparison, the iBUYPOWER AM003i Gaming Desktop PC stands 25 inches tall, 12.5 inches wide, and 21.38 inches deep, taking up much more space. CyberpowerPC, just like other boutique manufacturers, sometimes go overboard on the bling, but here the design is rather restrained, and I can say –elegant.

The system doesn’t have an optical drive, which is fine given that these days you occasionally need to play from DVDs, as most PC games can be downloaded from digital services like Steam and Origin. Plus, having one on the front would be a scratch on the case’s stylish austerity. As it is, there are easy-access ports on the top panel (towards the front): two USB 3.1, microphone and headphone, and a Reset button.

On the back, it’s a completely different story, it’s there you find the rear panel ports: two USB 2.0, four USB 3.1, one RJ-45 Network Ethernet, and Audio 7.1 channel. The graphics card is yet another part of the system with more ports comprising: three DisplayPort, and two DisplayPorts, which allow you to connect even to a 4K external monitor.

The 240GB SSD (for Windows and programs) and a 1TB 7,200rpm hard drive for storing files are neatly tucked out of sight in the drive cage, and the cabling is well done without any clutter. Bundled into the package is a RGB 7 Colors gaming keyboard and mouse, alongside 802.11AC Wi-Fi for wireless connectivity. The CyberpowerPC BattleBox Ultimate SLC8600A wraps up the storage options with a 240GB SSD and an entire 3TB 7,200rpm hard drive.

With its raison d’être being exquisite planning and design, and premium components, the Xtreme VR GXiVR8080A2 stacks well for any task thrown its way, and being Virtual Reality (VR) makes it an even appealing choice. This system uses liquid-cooled processing and graphics, all of which make it a heavy-hitter, and the overclockable CPU gives you even more overhead.

As configured out of the box at 3.7GHz, the eighth-generation Intel Core i7-8700K processor, 11GB Nvidia GeForce GTX 1080 Ti and 16GB DDR4 memory are more than sufficient for binge gaming, professional media editing and anything else you might want to do with a strong PC. For general performance, this system gives you more computer than you pay for, giving it a hang-on among the high-end desktops we’ve tested recently. As it is, multimedia projects should be a breeze, that’s if you need to work on video or photo editing while not gaming.

Gaming and 3D performance is where the Gamer GXiVR8080A2 really separates itself from the pack. Most of its immediate competitors are fast desktops equipped with GTX 1080s in SLI, but the 1080 Ti upgrade steers the CyberPower Gamer to the front, delivering the best frame rates per second (FPS) in the category. Set to Ultra quality settings and 1080p resolution, the CyberPower Gamer and its 1080 Ti doesn’t struggle to soar 279 frames per second on Heaven test and 174 frames per second, far ahead of the usual 60 fps target.

To get a grip of its resilience, bumping the same tests up to a 4K resolution, indeed very demanding for any system, it still managed to hit 112 fps on Grand Theft Auto V and 112 fps on Fallout 4. These are still smoothly playable frame rates, and not far off the typical GTX 1080 scores across the board, but still impeccable compared to other desktops using this graphics card.

The fact that it sticks so close to gaming rigs high up in the category like the Origin Chronos, make it a more desirable system given the price differences. The system doesn’t come bundled with a monitor, you’ll have to grab one like the Acer XR382CQK that will let you view content and play games at even 4K resolutions.

Sure, the CyberpowerPC Gamer GXiVR8080A2 holds its own well against similarly configured PCs that cost almost double and represents good value with its premium components. It is undoubtedly competitive in 3D gaming, and on productivity tasks, it can comfortably stack well against competitors higher in the price-tier (even on multimedia projects and video transcoding that yield more from the number of cores than clock speed) like the Asus ROG GT51.

That said, when prices soar critics may complain that they can build one of these systems for less on their own money, but that’s just a bluff –components used on this system are pricey. Even if that was still the case, the extra buck you’re paying for the builder’s expertise, technical support and more importantly, a high-end system that you’ll need to spend months working on and fallbacks along the path.

This CyberPower Gamer falls squarely into the high-end category, not only for impressive frame rate at 1080p, but also decent ones at 4K, and additional processing capabilities you’ve never had before for the price. Factoring all this together and throwing into the mix forward-looking potential, we have no qualms naming the Gamer GXiVR8080A2 as one of our top picks for high-end gaming desktops. 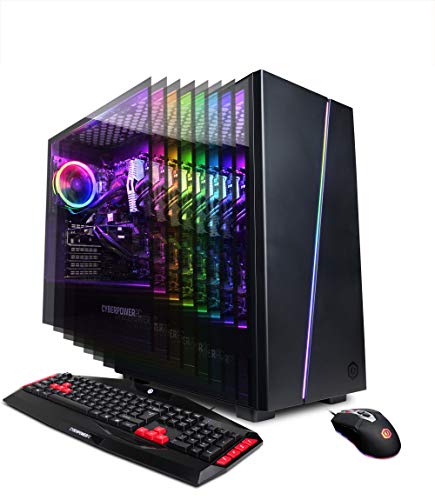