Though inexpensive – at least by gaming standards, the CyberPower GXiVR8020A6 has everything we’d expect in an entry-level desktop, and is incredibly easy to upgrade or choose from a horde of other Gamer Extreme configurations in-between.

Despite what you may gather from our reviews, not everyone is buying a tricked-out gaming PC. The sort of power they pack is sort of an overkill for most people, and lately, gaming desktops are just med-size towers with a Core i5 and a mid-range graphics card. The CYBERPOWERPC Gamer Xtreme VR GXiVR8020A6 meets that description, but adds some new hardware and upgradability to the spec sheet.

Our review unit is a budget model, with the right gaming features that will excite form gamers and professional creatives. Under the hood, it gets an 9th Gen Intel Core i5, a 1TB hard drive without an SSD option and AMD’s RX 580 graphics card to replace the older RX 480 cards.

Those are supposedly mid-range components, and they carry a corresponding mid-range price tag. How does it compare to more affordable mid-range gaming PCs? Can this budget Gamer keep up with the competition?

Gamer SLC is arguably CyberPowerPC’s flagship. Though its SLC is larger and more complex, it’s also more than most of us need. Gamer Xtreme, on the other hand, is your typical tower. At 17.8 inches tall, 18.4 inches deep, and 7.8 inches wide, this is a large desktop, but not any larger than its competitors.

In fact, most boutique builders are using the same standard tower lately. To us, it is the ideal size for a stay-home gaming desktop. It offers ample space for upgrades, but it’ll still fit comfortably under your desk.

CyberPowerPC ships the Gamer Xtreme in a custom chassis forged from metal, LEDs, and more LEDs. Aesthetically, it looks very familiar, thanks to a design inherited from last year’s models. You will receive it in sleek black, with red lights and a transparent side glass panel.

We’ve seen this look in the past, and found it attractive. Aside from the paint job, the unit’s enclosure is a bit colorful with a glass front panel dotted with a trio of LED rings. 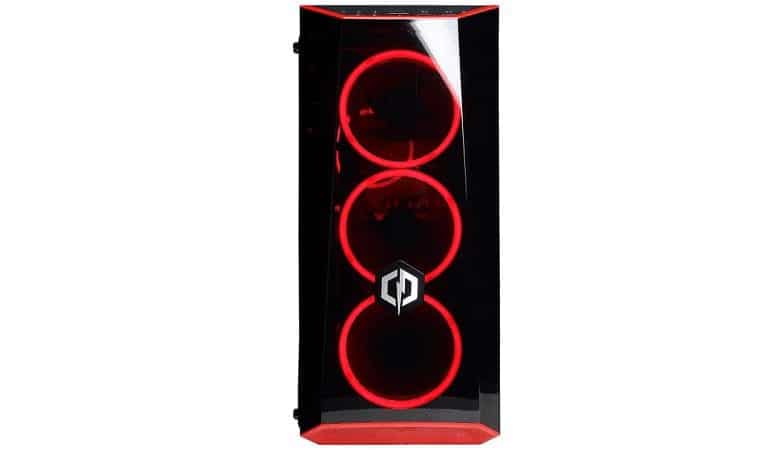 Yet the case is functional. It has two forward-facing USB 3.1 ports alongside a reset and power button. Thee are joined by microphone and headphone jacks. There is USB-C. And, the GXiVR8020A6, unlike its competitors, does not attempt to sneak-in a side loading optical drive behind a creepy drive bay door.

We are OK with the enclosure’s usability. The choice of forward-facing ports is great, and their location on the upper front panel means they’re easy to access no matter where you place the PC.

Around the back, connectivity includes four more USB 3.1 ports, two USB 2.0 ports, an Ethernet ports alongside an 802.11ac Wi-Fi card and a 7:1 audio channel jack. On the Radeon RX 580 graphics card, there is a DVI port, one HDMI port and two DisplayPort outputs for multiple monitor setups. This is a large system, so all its motherboard options include a good fetch of USB ports, and all video cards in this line can handle at least three displays. 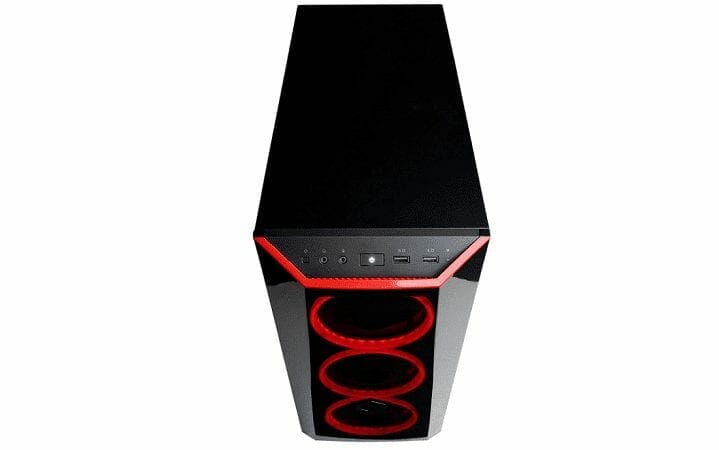 The CYBERPOWERPC Gamer Xtreme VR GXiVR8020A6 is the first desktop we’ve reviewed with Intel’s Core i5-9400f processor. That alone, at this price range, makes it notable, but CyberPowerPC didn’t stop there. It also cranked the processor up to an impressive 2.9GHz. It’s too early to know if AMD will counter with a Ryzen CPU that can cruise to similar heights at low price.

At the beginning of the year, we did review a few desktops equipped with the 9th Gen., 8-core processors, including the CyberPowerPC SLC10200CPG and the iBUYPOWER Trace 9230 – Intel Core i9-9700K and Intel Core i7-9700K, respectively. Both, are high-end gaming PCs and attract the same pricing, but offer excellent value for the much you’re paying.

Enter the Intel Core i5-9400F processor built around the Coffee Lake microarchitecture and manufactured around the 14nm process. It is a cheaper version of the newer 9th generation chips, with six cores, but lacks HyperThreading. It clocks in with a 2.9GHz base clock and a 4.1 GHz boost cache, 9MB of L3 cache and a TDP (thermal design power) rating of 64W.

The “F” suffix in its name refers to a new breed of processors that come with a disable iGPU (Integrated Graphics Processing Unit), meaning that DIYers will need to pair it up with a discrete graphics card. In the case of the CyberpowerPC Gamer, the processor is hooked Up to AMD’s Radeon RX 580 graphics card.

So far, the processor has proven entirely stable with decent clock speed which has a notable impact on productivity performance, boosting its results to the level we’ve come to expect of any hexa-core processor. It doesn’t obliterate a last-generation Intel Core i5-8400 processor, and in fact its margin of victory is a bit less that you’d expect given the predecessor is a quad-core chip.

Still, a win is a win, and you don’t have any performance bottlenecks here. The GXiVR8020A6 is frankly an overkill for most users. A variety of hard drive and SSD options are available in the Gamer Extreme Series. For our unit, CyberPowerPC selected a 1TB HDD alongside 8GB DDR4 ram, but you can always throw in more memory and even an NVMe SSD down the road. 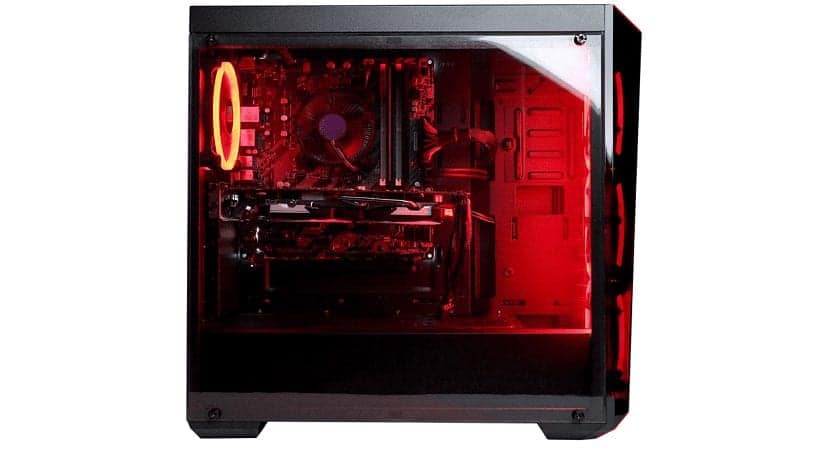 While the new Core i5-9400f processor is a markup in this Gamer, it’s not necessarily the most impressive component …or components. We dedicate that honor to the all-familiar AMD Radeon RX 540 (4GB) graphics card. One of the ways CyberPowerPC was able to keep the Gamer Xtreme’s price under $1,000 must have been by going with one of AMD’s latest GPU, instead of a pricier NVidia option.

As always, the graphics card is the most influential part of your gaming experience, and the RX 580 fares well against the competition. In fact, it goes neck-to-neck with systems running Nvidia’s GeForce GTX 1060 graphics cards – which typically retail for a few hundred dollars more.

In Honor, the RX 580 tops at 71 FPS while the MSI Trident and its 1060 maxes out at 56 FPS, while HP’s Pavilion 790-0020 fares a bit better at 74 FPS, putting it almost at par with the GXiVR8060A5. That said, the Gamer ships with a mouse and keyboard, so you’ll be able to get up and running even if you only have a monitor. The bundled peripherals are good for getting started off right out of the box, but neither keyboard nor mouse are in for rigorous game sessions.

Though inexpensive – at least by gaming standards, the CyberPower GXiVR8020A6 has everything we’d expect in an entry-level desktop, and is incredibly easy to upgrade or choose from a horde of other Gamer Extreme configurations in-between. It’s a good foundation for a value system you might have running for a decade or more.

The CyberPower GXiVR8020A6 starts at about but rings components that cost more if you opted to build it all by yourself. We could not configure competitors identically, because the Core i5-9400F was still under embargo, with similar priced units running on the Intel Core i5-8400 from last year. However, we doubt it has much difference on the price.

That said, direct competition seems to be in-house. The company is offering the CyberpowerPC Gamer Xtreme VR GXiVR8060A7 (reviewed here), fitted with a similar Intel Core i5 processor, but instead of AMD’s chip, it gets a better Nvidia GeForce GTX 1660 Ti graphics card.

In addition to the 1TB hard drive storage,  the GXiVR8060A7 throws in a 120GB solid-state drive for fast performance and better copy speeds. That right there is an overkill for around the same price, and everything else remains similar.

No. The CYBERPOWERPC Gamer Xtreme VR GXiVR8020A6 packs a solid feature set into a likable desktop enclosure that is attractive, functional, and easy to upgrade. However, the CyberpowerPC Gamer Xtreme VR GXiVR8060A7 offers incremental value with an GTX 1660 graphics option and the extra 120GB SSD counts for a lot. It remains our Editors’ Choice for budget gaming desktop PCs. 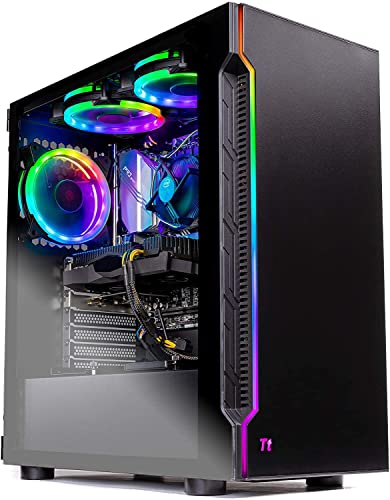 Cyber Security Trends to Watch in 2019