The CYBERPOWERPC Gamer Xtreme VR GXiVR8040A5OPT is a console-level, VR-ready desktop with the latest features and components including a Coffee Lake processor and Intel’s Optane Memory module but can be had for less money than competitors. 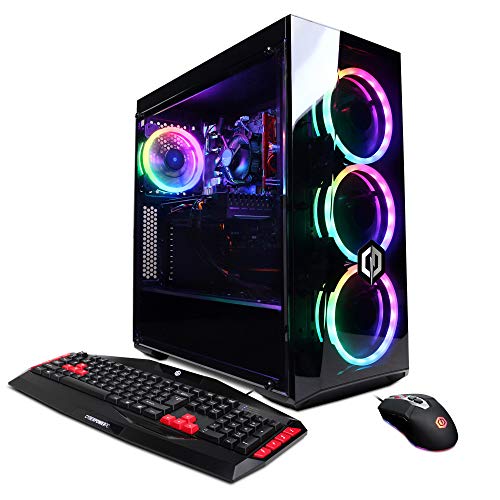 With the advent of Intel’s new Coffee lake processors, PC manufacturers have good reason to refresh their lines. For gamers and high-end PC consumers, there’s something more to keep them smiling in addition to the new chips. Intel’s Optane Memory modules look to give old-school spinning hard drives a much-deserved kick, offering them solid-state-drive-like (SSD) speeds.

The CyberPowerPC Gamer GXiVR8040A5OPT is the latest take on one of our favorite high-end gaming desktops, and the first Intel Optane Memory PC to come through to us for review. A while back, we had the base model of the same iteration, the CyberPowerPC Gamer GXiVR8040A5, that features Intel’s Core i7-8700 processor, 8GB memory, 1TB hard drive and AMD’s Radeon RX 580 graphics card.

This time, around, the Gamer GXiVR8040A5OPT packs the same components, but adds 16GB Intel Optane Memory. With this module, it amends the only issue we had with its predecessor –lack of a solid-state-drive (SSD).

While Optane Memory isn’t a replacement for a true SSD, it offers a way of rejuvenating traditional spinning drives and giving them SSD-like performance, without spending too much.

At first, Optane Memory might sound like RAM, but its in fact a specialized storage solution that connects to the M.2 storage slot (PCIe Gen 3.0×2) on a PC motherboard. It is available on the latest motherboards, first designed for Intel Kaby Lake (7th Generation) processors alongside the 200 series Intel chipset.

The Gamer Extreme GXiVR8040A5OPT has the same looks as its GeForce GTX 1060 sibling, the CyberPowerPC GXiVR8060A5, with a standard tower measuring 17.9 by 7.9 by 18.5 inches (HWD). It carries the same black aluminum case, with red LEDs across the panel. The sides and front panel are made of tinted tempered glass doors, that lets you access and view interior components easily.

Did I mention there are LEDs everywhere? Of course, it’s a gaming rig and we expected some bling, signed by a trio of concentric circles on the front panel. Despite the prevalence of light, they fit so well into the overall design without making the system ostentatious, and the tempered side with a view of interior components is easy on the eyes.

As early as 2016, PC manufacturers decided that we don’t need optical drives on notebooks, and by late last year, they had affirmed it that we don’t need the same on desktops PCs, as well. It was cast on stone, and you don’t have an optical drive on the Gamer GXiVR8040A5OPT, not as long as you can download all your games from digital services like Steam and Origin.

For now, you can do with a couple of easy access ports on the upper deck –two USB 3.0 ports, microphone and headphone, a reset button and Power button. Around the back are more ports including: four USB 3.1 Type-A ports, audio ports, an Ethernet port, two USB 2.0 ports (for connecting the bundled keyboard and mouse).

There’s also an HDMI and DisplayPort on the graphics card for connecting to external displays. For a VR-Ready system with HTC VIVE and Oculus Rift, having more ports is a bonus. Wireless connectivity comes via an 802.11AC Wi-Fi adapter.

We expected to have an SSD and around 16GB RAM or more here, but Optane Memory compensates for this lack. If needed, there’s a free slot where you can easily install an SSD later –they aren’t that expensive lately, though not necessary.

Compared: the CyberPowerPC Gamer GXiVR8060A5 (we reviewed it recently) features an 8th Gen Intel Core i5-8400 (2.8GHz, 6-Core) processor, 8GB RAM, 120GB SSD + 1TB hard drive and Nvidia’s GeForce GTX 1060 (3GB) graphics card. That’s an SSD solution right there for those who need it seriously, but the model we’re reviewing is using a Core i7 chip and inclues Optane Memory, but doesn’t get prohibitively expensive for those extra features.

For both systems, though, performance on most tasks including photo editing, video encoding and other complex projects is done with little fuss. Their real prowess can be seen in multimedia tests, where they both leave all but a few similarly expensive systems in the dust. The new Coffee Lake Intel Core i7 processor offers breakneck performance for productivity enthusiasts of any kind.

The AMD RX 580(with 4GB) graphics card is direct competitor to Intel’s GeForce GTX 1060 and sometimes closer to GTX 1070, and helps the Gamer Xtreme hold its own against competing rigs, eking out smooth playability at 1080p resolutions. As expected, it doesn’t fare as well on 3D gaming and falls short of systems outfitted with GTX 1070 and GTX 1080 GPU and 16GB, as they have more potential topping up frame rates. Such gaming desktops tend to cost more. However, if you get a 4K compatible screen like the LG 34UC79G-B, it’s possible to play most modern titles in 4K, at good frame rates.

Nevertheless, you can play a good deal of modern titles at the mentioned resolutions and the Gamer Xtreme won’t bat an eye. It puts a great show on modern games played at 2560-by-1440 (QHD), including:  Hitman (67.3fps) and The Witcher 3 (51.7fps). In all instances, the AMD 580 outperforms AMD’s RX 480, which isn’t surprising though.

As for the question of Optane Memory improving the overall gaming experience –the answer is a resounding YES; but, it depends on a whole lot of aspects of the game in consideration. Simply put, it depends on the type of game being played. A game like Fallout 4 that has lots of simulations and AI involved, there stands to be a clear benefit.

However, for a smaller game like portal 2, it isn’t big enough content wise to see a remarkable benefit. Nevertheless, with Optane Memory, the entire system grows, and benefits from load time cuts that you would otherwise not see if you were using a spinning hard drive alone. It does all that for generally less cash and in a less complicated way as compared to going all solid-state.

If you hadn’t already guessed from the extra ports on the front and back, the Gamer GXiVR8040A5 is a capable virtual reality (VR) machine. The eighth-generation Core i7 chip and the AMD RX 580 are around the basic requirements for both Vive and Oculus. For that, it’s a perfect exit from gaming consoles and, you won’t be spending too much for that matter. If you’ve always fancied a reasonably priced desktop that packs enough power to drive a VR headset, you can easily start here.

PC gaming conjures images of beastly designed rigs with impossible intertwined lighting and cooling setups. The CyberPowerPC Gamer GXiVR8040A5OPT manages to catch the aggressiveness in a standard tower while retaining the attitude of a custom-built system in both style and function. It has plenty of power, and the fact that the components can be swapped out makes it quasi-future proof, for anyone who needs a system that can grow into something bigger in future. Apparently, you might not want to add a thing down the line, since this PC comes with some of the latest components including the latest Coffee Lake processor and Intel’s Optane Memory, but add more RAM if needed.

That said, when prices soar critics may complain that they can build one of these systems for less on their own money, but that’s just a bluff –components used on the Gamer GXiVR8040A5OPT are pricey. Even if that was still the case, the extra buck you’re paying for the builder’s expertise, technical support and more importantly, a high-end system that you’ll need to spend months working on and fallbacks along the path.

This CyberPower Gamer falls squarely into the high-end category, not only for impressive frame rate at 1080p, but also decent ones at 4K, and additional processing capabilities you’ve never had before for the price. Factoring all this together and throwing into the mix forward-looking potential, we have no qualms naming the Gamer GXiVR8040A5OPT as one of our top picks for budget high-end gaming desktops. If you’re not in the headspace to go the DIY route, this PC is one of the most compelling options around.