The CyberpowerPC GXiVR8480A11 is an excellent gaming PC for anyone looking for an inexpensive gateway into the world of PC gaming, without compromising or raw power and aesthetics.

The CyberpowerPC Gamer Xtreme VR is hands-down one of the best pre-built gaming PCs you’re going to find in the market, no matter your budget, and we’d even argue that it’s simply the best custom gaming PC you can invest in for that reason.

Our review model – the CyberpowerPC GXiVR8480A11, starts with a capable Intel Core i5-11600KF and Nvidia GeForce RTX 3060 (12GB), you can scale your build as high as the latest Intel Core i9-12900KF and GeForce RTX 3090 (24GB GPU) in the CyberPowerPC GXiVR8080A29, with various RAM and SSD configurations and everything in between.

Across all hardware configurations, you’re getting souped builds full of RGB lighting as well as clean cable management options that come in different colors to better blend with your style.

Plus, given the incredible variety of options on the latest CyberpowerPC Gamer Xtreme VR series, there’s no way can go wrong and you’re sure going to find a configuration that matches exactly what you’re looking for in a gaming PC.

Again, custom builds like this saves you the trouble of having to DIY such a high-end system yourself, and coming by some of this high-end hardware, especially GPUs is a bit complicated. That doesn’t mean mainstream gaming PCs like our Editors’ Choice the Asus ROG Strix GA35 are worse, but there’s something unique with scalable pre-built rigs.

About the CyberpowerPC Gamer Xtreme VR

Here are the specs of the CyberpowerPC GXiVR8480A11 in this review

Ultimately, the Gamer Xtreme VR is the ultimate gaming PC for anyone wanting a rig customized for midrange gaming, without the usual hassle of having to build the thing up, all for a price that’s simply not easy to beat anywhere else.

Out of the box, the CyberpowerPC GXiVR8480A11 provides an attractive raven-black tower chassis. The bold front-facing CyberPowerPC logo and three fans behind it feature RGB lighting that’s customizable, making it better than most of its peers. Those looking to showcase the desktop’s innards will appreciate the transparent glass side panel. Side, top, and rear ventilation keep the Gamer Xtreme VR cool, with a total of five possible locations for maximum cooling.

On the front, there are two USB-A ports, a single USB 3.1 port alongside headphone and microphone jacks in the front, though it would be nice to have at least one USB-C port there.  Around the back, there are four USB 3.1, two USB-A, an Ethernet port, and a 7.1 audio channel. Wireless connectivity comes via 802.11AC Wi-Fi.

Also included in the package is a 7 color RGB gaming keyboard and mouse which are just passable, as they are not the best for gaming. Considering a lot of brands don’t include these features at this price point, the additions are admirable. The machine measures ‎26 x 23.75 x 13.75 inches and weighs 37.6 pounds.

The CyberpowerPC GXiVR8480A11 packs a capable Nvidia RTX 3060 (12GB) graphics card, and that should excite gamers looking to take their gaming to the next level, while not spending too much on a maxed-out gaming rig.

Like the rest of the Nvidia RTX 3000 series graphics cards, the GeForce RTX 3060 is based on Nvidia’s Ampere architecture. With the move from Turing to Ampere, Nvidia brings to the core more than just a higher product number.

The biggest change in Ampere is in the Streaming Multiprocessor’s (SM) datapath, whereby, while the RTX 3060 has fewer SMs at 28 than the RTX 2060 with 30, its CUDA core count jumps to 3,584 on the RTX 3060 over its predecessor’s 1,920. That’s a massive boost, and that explains the reason why the RTX 3060 is an excellent performer in gaming workloads.

And the GeForce RTX 3060 in this model comes equipped with 12GB of GDDR6 VRAM on a 192-bit bus. Well, that’s a lot of memory available on a graphics card.

In real-world gaming, Nvidia’s graphics offering comes into play. For instance, Shadow of the Tomb Raider runs at 153 fps at 1080p on the GXiVR8480A11 and 56 fps at 4K. The former ties with the Dell G5, and the latter tails the HP Omen 30L, by a wide margin, but understandable considering it packs the high-end Nvidia RTX 3080 graphics card and Intel’s Core i9-10850K processor.

Elsewhere, Far Cry New Dawn leverages the MSI Aegis but pulls ahead at 1080p by 11 fps, scoring 108 fps, which drops to 65 fps in 4K. Borderlands 3 (high settings) at the exact resolution achieves 117 fps, which is impressive. And at 4K, the CyberpowerPC Gamer’s 39 fps is once again a few frames behind the MSI and Alienware systems with the same GeForce RTX 3060 graphics cards.

Finally, Nvidia Ampere brings ray tracing and Deep Learning Super Sampling (DLSS), and both of these technologies are available on the RTX 3060. This means that this rig performs especially well at 1080p, but 1440p might not be that fluent, and not all games are going to utilize all that 12GB RAM, after all.

As ever, the RTX 3060 meets the requirements to support VR gaming, meaning it’s optimized for your HTC VIVE and Oculus Rift VR headsets.

Under the hood, the CyberpowerPC GXiVR8480A11 packs an 11th generation Intel Core i5-11600KF processor with 16GB DDR4 RAM, 500GB SSD + 1TB hard drive storage, and Windows 11 pre-installed. That, right there is a solid configuration for most (if not all) of your computing needs, including media creation tasks.

As configured, the CyberpowerPC GXiVR8480A11 stands out as excellent value, especially for a machine that costs just over one grand. It represents better overall value when compared to machines like the HP Omen 25L, which costs a few hundred dollars more, but packs just a 6GB GeForce RTX 2060 Super graphics card.

The Dell G5 with a 10th Gen Intel Core i7-10700K processor costs more. Even the boutique-built SkyTech Shadow 3.0 will set you back a little more, despite packing the same Ryzen 7 CPU, Nvidia RTX 3060 GPU, and 1TB storage.

All these make the CyberpowerPC Gamer Xtreme VR better value, capable of productivity and workstation tasks as it is playing games. Its feature set suggests that it’s perfectly capable of handling tasks that require significant processing muscle. Naturally, an eight-core chip should fare better, but getting one of those in a gaming tower gives you immeasurable value for your buck.

Port options would be better

While the CyberpowerPC GXiVR8480A11 offers most of the ports you’d need to get connected, it still lacks some future-proof essentials. It doesn’t include a card reader, and a USB-C port on the front panel would’ve made more sense. Nonetheless, the available options should be enough for a gaming keyboard, mouse, and webcam setup.

Should you buy the CyberpowerPC Gamer Xtreme VR?

If you can spare a little more, that’s OK as well, since you’ll get better performance and more advanced hardware. For instance, the CyberPowerPC GXiVR8080A29 is a high-end gaming PC that lets you play modern titles in 4K resolutions thanks to its Intel Core i9-12900KF CPU and Nvidia RTX 3090 GPU. 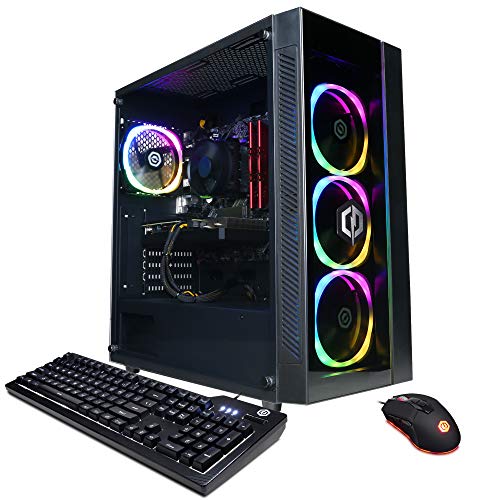