Dell’s Inspiron All-in-One (AIO) desktops combine simple versatile design with good power at reasonable prices. Case in point: The Dell i3265-A643WHT-PUS is a nice-looking, affordable but highly efficient desktop. It isn’t the flashiest system around, but it’s an echelon of power, with a fast AMD A6-7310 APU, a Radeon R4 graphics card, enough storage, and includes an optical drive.

Although it doesn’t bring anything new into the market, performance-wise, it still has its credits in order including a full HD screen, a powerful seventh-generation processor, good connectivity and nimble aesthetics that look like a standalone display.

As configured, it sports a compact chassis and wireless connectivity that suffice for office setups in cramped spaces, plus its anti-glare and power make it a shoo-in for the creative folks.  It’s a less powerful performer, and has less –in fact half– storage than the HP Pavilion 24-a210 AIO PC, our Editors’ Choice, and of course it doesn’t have the multimedia prowess of the Apple iMac 21.5-Inch with 4K Retina Display. But for bargain hunters, who need an affordable AIO PC, it is the go-get system with the right features and muscle that make it an excellent PC for the home office.

The Dell i3265-A643WHT-PUS is housed in 21.8-inch FHD (1,920-by-1080) In-Plane Switching (IPS) non-touch display. The PC’s body minus easel stand measures 13.3 by 20.7 by 1.3 inches (HWD) by itself, which isn’t too much space occupied on your work surface. It is clad in a white chassis, that is a wide shift from the black, dark gray profile we’ve seen in OptiPlex desktops and displays. It looks flashy, just like most AIOs we’re seeing in the market, but it will blend with most office environments just fine.

The stand isn’t versatile. It takes away the luxury of pivoting the monitor from portrait to landscape, especially when you went to collaborate with a colleague at the office. All it does is let you adjust the angle and orientation of the screen. The 22-inch 1,920-by-1,080 non-touch panel display full HD video with great clarity, though it can’t be as vivid as what you’d get from a 4K panel. The screen is surrounded by a thick white bezel, with a silver easel stand that makes it easy on the eyes.

On the back of the screen, you’ll find several recessed ports: two USB 2.0 ports, an RJ-45 port, Audio Line Out, DC Power, and an HDMI-out port (for connecting to an external display). On the left edge of the system, there are two more USB 3.0 ports, a headphone jack, and a smart card reader. It’s always exciting to have a couple of ports on the side of an AIO system, since those set on the back are sometimes difficult to reach.

On the right, there are three buttons above the Power button that function to putting the monitor to sleep and adjusting its brightness. Also on the right, almost at the back is a DVD/CD-RW, which rounds up the perfect collection of I/O ports for a business AIO, and should be fine with most business uses.

In case you need to do a few upgrades, the system’s internals are easily accessible: Just press a button on the back to release the stand, and right there is a small door through which you can access components such as the hard drive and memory. Our review unit came with a 1TB 5400RPM hard drive, quite slow, and 6GB of memory (can be upgraded to 16GB, and the HDD swapped with a speedy SSD ) so boot time was speedy.

Bundled into the package is a white wired keyboard and mouse. The full-size keyboard is comfortable and responsive to type on, and the key are well set. The mouse is rather plain, but still acceptable for office use. The Inspiron come with Windows 10 Home (64-bit) that has a few preinstalled programs. Network connectivity comes in way of dual-band 802.11ac and Bluetooth 4.2, in addition to the aforementioned Ethernet port.

The Dell i3265-A643WHT-PUS is equipped with a 2.40GHz AMD A6-7310 APU with Radeon R4 graphics and 6GB (2GB+4GB modules) system memory. It may not be the most powerful system around, but it’s well configured for basic computing needs. You’ll particularly be impressed by the system’s ability to handle day-to-day computing tasks ranging from launching multiple spreadsheets, keeping open a couple of browser tabs open at the same time, and copying files in the background.

With the AMD APU, the system can easily handle office tasks quickly and efficiently, and can even allow you indulge in enthusiast-level multimedia projects without slowing down. It performs better than the HP 22-B010, sporting a newer CPU and more RAM.

Essentially, it is a system designed for basic computing needs. It isn’t cut for gaming, so it’s understandable when it will lag once you throw RAM-taxing games its way.

That notwithstanding, you’ll possibly play basic games at medium quality settings at 1,366-by-768 resolution, anything higher will be calamitous. That simply means that you can play basic games like Minecraft or other classics like Star Wars in a small window while you’re not working.

The Dell Inspiron i3265 is a prime choice for home or a small office that primarily need simple computing power, ideally for recipes, spreadsheets, MS Office and video conferencing, and don’t want to spend so much on the same. It is one of those systems that your IT department will appreciate for its ease of access to the hard drive and memory, in addition to a clear 1080p screen and a plethora of ports for connecting various peripherals.

On the downside, it comes with a slow 1TB hard drive, while others are offering double that storage, and the lack of height adjustment is a notable flaw, though, not prohibitively so. But it makes up with a fairly powerful processor, good connectivity and a Full HD screen, over last year’s model.

Those upgrades are certainly worth mentioning, and for that reason we can recommend the Dell i3265-A643WHT-PUS for anyone in the market for and affordable –yet powerful– home office all-in-one desktop PC.

The Dell Inspiron i3265-A643WHT-PUS is an All-in-One desktop PC, that is a prime choice for the home office that requires an affordable system that’s just enough for simple tasks like spreadsheets, MS Office, and video conferencing. 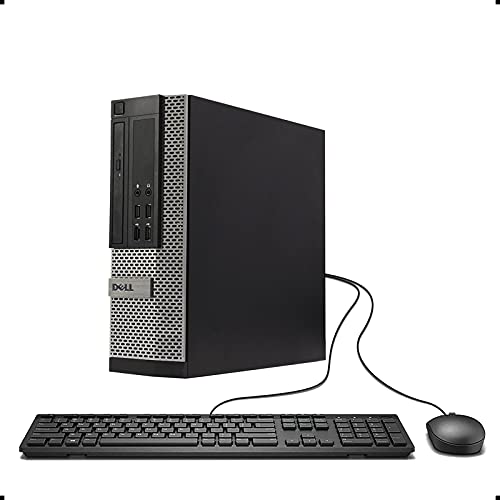