The Dell Inspiron i3050-3000BLK desktop is a good attempt at creating a Windows PC for the same price as a Chromebox. It has the oomph to keep you entertained and is competent enough to run Windows apps, albeit at slower speeds, than expensive entry level systems. Its tiny footprint makes it possible to locate it just about anywhere in the house, and it comes with a variety of connectivity ports.

Despite its diminutive size, the Dell Inspiron i3050-3000BLK is a fully functional Windows 10 desktop PC that will run your basic everyday computing needs. It comes with a dual-core Intel Celeron processor and a 32GB solid-state drive (SSD), which quells the common perception that all budget PCs are either slow or sluggish, or even both.

While bare-bones, it does suffice as a fully functional Windows 10 system with the size of a hardcover book. It isn’t as powerful as the Apple Mac Mini, our top pick for small-form-factor (SFF) PC, but it’s rather inexpensive and is a good choice for Windows users.

The Dell Inspiron i3050 has a very compact chassis, measuring about 2.1 by 5.2 by 5.2 inches (HWD); it is slightly thinner and smaller than the Apple Mac Mini. The glossy black body is a bit utilitarian and is a stark contrast to the Mac Mini’s matte aluminum finish, but the Inspiron i3050 is a good-looking small system nonetheless. It has four rubber legs that snap it off the surface, so you won’t have much hustle finding a perfect spot to position it next to your HDTV or monitor.

To access the interior, you have to remove the four rubber legs (in fact they just pop right out) and then undo the screws behind them. With the bottom panel off, you can replace the SSD, memory which according to Dell is a maximum of 8GB and Wi-Fi components. Just that, there is no room to add new components. You also get a bundled keyboard and mouse alongside the package, but a wireless keyboard and mouse would be better suited to as it can likely be controlled from a couch.

Here you get a decent collection of external I/O ports, albeit the small size. On the side of the panel are various ports, including one USB 3.0 port, three USB 2.0 ports, a standard headphone jack, and a 3-in-1 card reader slot. Others include an HDMI video output, a DisplayPort, and a digital optical audio output.

The HDMI port and DisplayPort make it possible for multiple monitor support and you can stream your videos to your HDTV seamlessly. For connectivity, the Gigabit LAN, integrated Bluetooth, and wireless networking via an 802.11a/c Wi-Fi card come handy. In comparison, the Mac mini too offers the same newer 802.11a/c Wi-Fi, as well as Bluetooth 4.0 networking.

Powered by a modest 2.41GHz Intel Dual-Core Celeron J1800 processor, integrated Intel HD graphics, and 2GB of DDR3L memory, the Dell Inspiron i3050-3000BLK turned in mediocre scores in standard performance tests. On PCMark 8 Work Conventional test, it scored 1,321 which was not close to the Lenovo IdeaCentre Q190’s 1,912 points or even the Zotac ZBOX-CI320NANO’s 1,496 points. Put to the same tests the Apple Mac Mini scores better overall, and the same can be translated into your daily computing. The 32GB SSD storage is quite slim if you’re a video collector but, but you’re safe if you’re all you looking at is streaming all of your music and videos.

The meager amount of memory is likely due to Dell wanting to keep the system price low, which is more of a consideration for most buyers. We foresee you running out of active memory if you, say, have the tendency to keep multiple browser windows open, plus multiple chat or Skype sessions active at the same time. The system is ill-suited for playing most games on an HDTV, and the best you can achieve are single-digit frame rates on most titles. Apparently, you don’t want to play any games more complicated than Angry birds on the system.

Watching 720p and some 1080p HD on the Inspiron i3050 is a smooth experience as we experienced a minimal drop in frames or stuttering. However, it can’t be said to be an alternative to the mainstream PCs that support full HD resolutions. From a distance, viewing streaming media appears to be the system’s forte. For that, I think it’s a better choice for video viewing and streaming than most mainstream Smart TVs, considering that streaming services like Amazon Instant Video, Hulu, and Netflix tend to update their Windows plug-ins much faster than they would for most Smart TVs (if at all).

The Dell Inspiron i3050-3000BLK desktop is a good attempt at creating a Windows PC for the same price as a Chromebox. It has the oomph to keep you entertained and is competent enough to run Windows apps, albeit at slower speeds, than expensive entry level systems. Its tiny footprint makes it possible to locate it just about anywhere in the house, and it comes with a variety of connectivity ports.

Expansion potential is limited to the bare minimum, but that’s just true of just every SFF PC we’ve reviewed. May you require more computing horsepower in the same small design and aren’t thrilled to have Windows control your home entertainment, consider our Editors’ Choice for small-form-factor (SFF) PCs, the Apple Mac Mini. It combines great build quality, more powerful Intel Core i5 processor and sports a faster GPU, plus a decent collection of free apps. 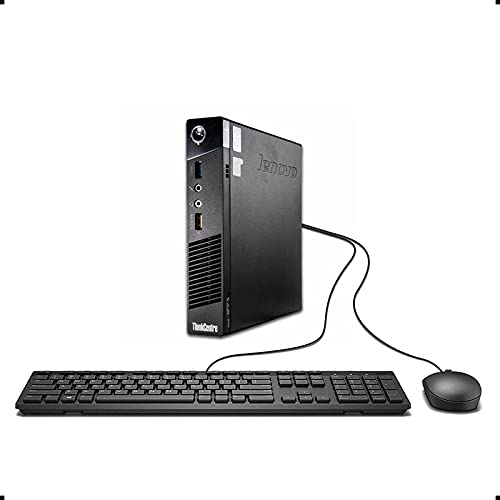