The Dell Inspiron 13 5000 (i5379-5043GRY-PUS) offers good value in both design, feature set and performance than you’d find in the 2-in-1 convertible category, for much less.

Want a very affordable 2-in-1? The Dell Inspiron i5379-5043GRY-PUS is a convertible-hybrid laptop with a price tag that’s smudged between what we consider entry-level and midrange. It incorporates some premium features, such as the latest eighth-generation Core i5 processor and a full-HD-resolution screen, but it makes a few compromises as well. For instance, you’ll get a 1TB 5,400rpm HDD rather than a much-faster SSD, but that’s how Dell lets you save a couple of bucks.

Overall, apart from the new Kaby Lake R processor, the whole combination and feature set aren’t enough to dethrone similarly priced Top Pick laptops, Dell Inspiron 13 7000 and Acer Aspire R 15. If all you’re looking for is an affordable bend-back laptop for use at home or office, this 2-in-1 offers solid value, but if you plan to use it for complex multimedia tasks, you’ll want to look elsewhere.

The Inspiron 13 has a 2-in-1 convertible hybrid design, meaning the screen can be flipped around and used in: Tablet mode as a handheld; Stand mode with the keyboard facing down; and, Tent mode with the hinge up while the keyboard is facing away from you. In all these three modes, the touch screen is placed in the front and center, so you can seamlessly interact with Windows 10 or watch your videos easily.

The remaining Laptop mode lets you use the Inspiron as a traditional laptop, with the functionality of a typical clamshell notebook PC. The system’s body, top lid, bottom lid and keyboard deck are finished in a dark gray, while the glossy screen has a black bezel beneath the glass surface.

However, if your work entails holding a PC in one arm for more than an hour, then you’re safe with a detachable hybrid, let’s say something like the Microsoft Surface Book 2, which has a 1.6-pound tablet that is easily separated from its keyboard case.

An easily accessible keyboard is perhaps the main reasons you’d prefer a 2-in-1 convertible laptop over a detachable or slate tablet, and the Inspiron 13 has a really good one. The backlit keyboard is easy to type on, and its one-piece touchpad is wide enough and well proportioned, with support for multi gestures. This gives it an edge over using a traditional mouse for anyone considering it over the touch screen.

The system’s 13.3-inch touch screen has a 1,920-by-1,080 (full HD) resolution, which is now becoming stand even for low-end systems.  While a QHD+ (3,200-by-1,800) screen would have been better, 1080p is still perfectly fine if all you do is primarily stream videos from YouTube, Hulu, and Netflix. With a full HD screen, you benefit from extra pixels that give better fidelity for watching 1080p movies, more screen area for viewing web pages, easy editing of PowerPoint presentation layout, or working on Excel spreadsheets.

Connectivity isn’t bad with a couple of caveats. There is a headphone jack, a HDMI port, one USB 2.0 port, two USB 3.0 port and an SD card reader. It doesn’t have a USB-C, which would have ensured that the laptop is at par with the industry standard, as we’re seeing it being adopted in more hard drives, smartphones, and laptops. Also, it doesn’t get an optical drive and a LAN port is also missing for wired connectivity. It supports dual-band 802.11ac Wi-Fi and Bluetooth 4.2 for wireless connections.

The 1TB is enough for your downloads and other files, but being a 5400rpm hard drive, it should go the dinosaur way. We expected an SSD to complement the newer processor in keeping boot times quick and performance snappy, but Dell opted for the mechanical, cheaper shortcut of installing a dated hard drive. If you can’t stand a slow HDD, you can easily swap it with a snappy 2.5” SSD, by simply undoing a few screws on the bottom lid.

In addition to an Intel Core i5-8250U processor running at 3.4GHz, our review unit includes 8GB of memory and a 1TB hard drive storage, both of which are upgradable. It is possible to open the case and upgrade/swap the components yourself, but it more preferable to upgrade the memory and storage as you purchase the laptop. As with most convertibles, integrated Intel 620 graphics cards don’t make it a great choice for gaming or graphics-intensive apps.

That said, if its solid day-to-day performance you’re looking for, you don’t have to change a thing. The 13-inch surges ahead in most productivity benchmark tests, largely thanks to the power of Intel’s eighth generation processor. The new CPU was launched in August, and we’re seeing it slowly trickle into mainstream consumer PC, and initial tests point towards improved performance and energy-efficient over its predecessor. As such, folks who edit their work in the field will find the new Inspiron to be quicker at completing many tasks.

Improved processing power and enhanced performance benchmarks doesn’t mean shorter battery life, however. The newer chips enable the Inspiron 300 offer extended battery life, longer than the 6 hours 24 minutes we got from its seventh-generation predecessor. Certainly, the newer processors are efficient on energy, that’s why we’re seeing systems such as the Lenovo Yoga 920 last a remarkable 22 hours 38 minutes, outlasting both the Surface Book (19:17) and Apple’s MacBook Pro (16:24), each with a record of excellent battery life.

Good Value for a 2-in-1 Convertible

The Inspiron i5379-5043GRY-PUS has everything you need in a midrange 2-in-1 laptop, from a sleek design, excellent performance, superb build quality and premium looks as well as portability. For now, it looks like an excellent alternative to the Chrome OS Chromebooks, as it gives you access to full Windows 10 operating system and is easily upgradable.

However, its choice of storage and lack of a USB-C port hold it back from being a top pick in its category. If you need more muscle and portability, the Lenovo Yoga 920 offers better value, especially for creative professionals. That said, if you’re not planning to spend so much for a new laptop, the Dell Inspiron i5379-5043GRY-PUS is a practical alternative, and should be on your short list. That said, the Lenovo Flex 14 is yet another value 2-in-1 convertible that offers better value. It’s our newest Editors Choice for budget 2-in-1 ultraportables. 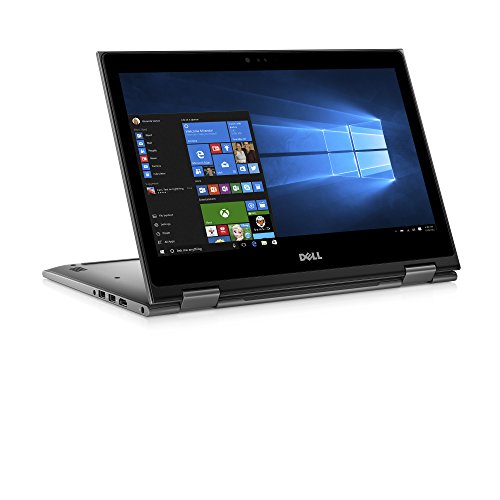