The Dell Inspiron i7359-8404SLV is a speedy convertible-hybrid laptop that allows you to access the best of both worlds (laptop and tablet) than a traditional laptop. It also comes with some premium components such as the latest Intel Core i7-6500U processor, 8GB system memory and 256GB SSD for storage, that also boosts booting and performance, and a sleek design to match.

The Dell Inspiron i7359-8404SLV is a midrange convertible laptop that packs an elegant design and subtle performance into a premium-looking chassis. The 2-in-1 laptop has a dual hinge that enables you flip the screen around so that you intuitively interact with your programs on the screen. It includes premium features, like the sixth generation Intel Core i7-6500U processor (which is both energy efficient and powerful), 8GB of system memory, and 256GB solid-state drive (SSD) storage.

From a distance, it looks quite heavy to be used as a full-time tablet; but it will come-in-handy as a laptop with a decent touch screen, which makes the pre-installed Windows 10 gestures more enjoyable.

The 1080p (1,920-by-1,080-resolution), In-Plane-Switching (IPS) screen adds some eye-candy to your multimedia sessions. The display appears bright and clear, especially after turning off the adaptive screen brightness setting in the power-option control panel. Image and text output is crisp clear, especially compared with most less-expensive, low-resolution LCD panels such as the one fitted on the Acer Aspire R14. Sound output from the speakers is good in our tests, but at high volumes it tended to get somewhat buzzy, but still manageable.

Connectivity is good. On the left side, you’ll find an HDMI port, a headset jack, a Noble lock port, and two USB 3.0 ports. On the right, there are an SD card reader, the Power button, a USB 2.0 port, and the volume-control switch. The USB 2.0 and 3.0 ports are the same color, which increases the possibility of inadvertently plugging a USB 3.0 device, like an external SSD, in the slower USB 2.0 port, which can be annoying. Wireless connectivity is excellent, including dual-band 802.11ac and Bluetooth 4.0, which is tied to the wireless card. Just like its competitors, the system has a comfortable backlit keyboard.

Battery life is something worth considering in the convertibles category and many people have been able to get almost 6 hours of use here-which is close to our tests. With the energy efficient Intel Core i7 processors, I can’t agree more to that. At the very least, the Dell Inspiron i7359-8404SLVwill last all day untethered from a wall socket, provided that you have some breaks in between and shy away from running multiple overhang apps open simultaneously.

The Dell Inspiron i7359-8404SLV is equipped with a 2.5GHz sixth generation Intel Core i7-6500U (4MB L3 cache with turbo up to 3.1GHz) processor, 8GB RAM (on a single DIMM, can be replaced with a single 12GB or 16GB), 256SSD storage and Integrated HD graphics card. A combination of the latest Skylake processors (released in August 2015) that are both powerful and energy efficient and enough system memory helps the system achieve a Passmark score of 4274 points, which is enough for most users.

The latest HD 520 graphics with a G3D score of 836 makes the unit competitive enough, even slightly faster than the also latest Intel HD 6000 and 5200 GPU. Being an integrated card, the system should be able to handle some of the latest game titles for 2015, albeit, at low settings. If you’re looking for some gaming prowess and multitasking potential, you might be interested in the Dell Inspiron i7559-763BLK, but for a potent gaming rig you might have to look elsewhere like the Asus ROG GL552VW-DH71.

On the Inspiron i7359 you’re free to flip the screen into four different modes, thanks to the dual-hinge design. Apart from Tablet and Laptop modes, the system’s screen can be accessed via Tablet Stand and Tent modes, with the former being the same as Display or Stand Mode on other convertible laptops. In the latter two positions, the keyboard and palm rest are moved away from the display.

You also get a vibrant 13.3-inch Full HD display, with a very responsive 10-point touch screen, although you might need a microfiber cloth to wipe the obvious fingerprints and streaks from the screen. Thanks to the simple dual-hinge mechanism, the solid build minimizes screen bounce in the middle of touch sessions.

The Dell Inspiron i7359-8404SLV is a speedy convertible-hybrid laptop that allows you to access the best of both worlds (laptop and tablet) than a traditional laptop. It also comes with some premium components such as the latest Intel Core i7-6500U processor, 8GB system memory and 256GB SSD for storage, that also boosts booting and performance, and a sleek design to match. Nonetheless, the Dell Inspiron i7359-8404SLV stands its own in the competitive 2-in-1 class, with a pack of components and specs, for that it should be at the top of your short list.

The latest Dell Inspiron i5378-7171GRY, a midrange 2-in-1 convertible-hybrid laptop, flaunts new features that slice a niche for it at the top of the class. Last year’s Dell Inspiron i7359-8404SLV was one of the few, reasonably priced laptops with a multimode form factor. At the time, we loved it for a sleek design, good connectivity and solid performance. Dell keeps the same form-factor in the latest Inspiron by maintaining the same 1080p HD touchscreen, dual-band 802.11ac Wi-Fi and adds a USB-C port, quite impressive.

Plus, the system has been upgraded with the latest seventh-generation ‘Kaby Lake’ Intel Core i7 processor and improved overall stability. This, along with stronger overall performance and almost all-day battery life, makes the 13-inch Inspiron i5378 well worth your consideration if all you need is a midrange user’s convertible laptop. 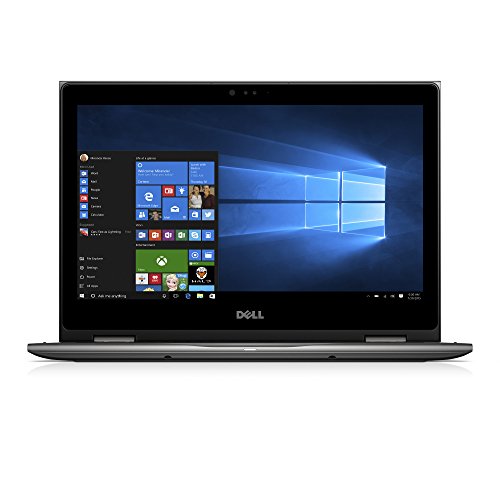