The Dell Inspiron i7559-763BLK is an entry-level gaming laptop, that actually has some components that deserve the “entertainment/gaming” label. The system has its gaming credentials in order, including an enthusiast-oriented NVIDIA GeForce GTX 960M 4GB GDDR5 graphics card, a speedy quad-core 6th Gen. (Skylake released in August 2015) Intel Core i5 processor, Windows 10 Home (64-bit) preinstalled, 8GB of system memory and 256 GB Solid-State Drive (SSD) for storage, but doubles up in speedy boot times and performance as compared to hard drives.

The Inspiron 15 stands out as a great bargain and a good bang-for-the-buck proposition. If the forward-looking capabilities and great design are anything to go by, then  the Inspiron 15 is something we can call a step in the right direction. For that, it deserves our nod as the newest Editors’ Top Pick for entry-level gaming laptops.

It is part of the Inspiron 15 700 Series, which is optimized for work productivity and mid-range gaming performance, although it packs some of the latest specs into a light-weight, slick design.The matte black and beautiful Inspiron i7559-763BLK sports a premium-level design measuring less than an inch thick forged with aluminum and diamond-cut beveled edges that make it slimmer, thinner and lighter than other models in the Inspiron 15 7000 Series.

It looks formidable, measuring 1.0 by 15.1 by 10.4 (HWD) and weighing in at about 5.67 pounds. It’s lighter than typical 17-inchers for gaming, like the Lenovo Y70 Touch (7.5 pounds), but it’s meant to be used as a desktop-replacement rather than one you’d tot around on your daily commute.

The last setting supposedly reduces blue colors to help with eye fatigue, but to our eyes it simply makes everything more sepia-toned. In the default sRGB mode, however, the display looks bright and exceptionally crisp. It has a backlit keyboard, but I predict that not everyone will be happy with the fact that the touchpad is positioned on the left.

Inside, the storage is both speedy and spacious, thanks to a 256GB solid-state drive (SSD) which is better than the slower hard drives. If the space appears limited, you have an easy solution to get more storage by putting your files in various online cloud services. There also seems to be mSATA slot for an extra SSD if you wish to install one.

The 15.6-inch is a bright spot. At 1,920 by 1,080, its resolution is lower than the 4K resolution of the ASUS ZENBOOK UX501VW-DS71T . We think that a 1080p display is better suited to entry-level gaming GPUs, like the NVidia GeForce GTX 950M, as the performance numbers bear out (more on that below). The screen is pre-calibrated and can be set to different modes for different usage scenarios. These include design work, gaming, office apps, movie watching, and a setting called anti-blue.

The 15.6-inch screen is decent enough for both gaming and productivity tasks. Being an IPS display, it is superior to cheap TN panels in terms of colors and viewing angles, in addition to anti-glare coating and  a full HD (1920-by-1080) resolution. Touch is not supported, but for gaming purposes such a display should be very decent at least. A 1280×720 webcam is available on Dell Inspiron i7559-763BLK, you’re good to film videos or chat with your friends on Skype, with Waves Maxx Audio Pro for clear sound output.

Connectivity is excellent. The system comes with three USB 3.0 ports, HDMI-out is also present, although DisplayPort is missing which is quite a drawback, and might upset some hardcore gamers. Optical drive isn’t something you find here either; if you need to install games from discs you’d better get an external DVD drive. Wireless connectivity comes via 802.11 A/C + Bluetooth 4.0 adapter. There’s also integrated 1000Mbps controller with RJ-45 port in case you want to connect using wire.

A sixth-generation Intel i5-6300HQ 2.3 GHz Quad-Core (6 M Cache, Turbo up to 3.2 GHz based on Skylake microarchitecture) and NVIDIA GeForce GTX 960M 4GB GDDR5 provide adequate gaming performance and very good multimedia score on the Dell Inspiron i7559-763BLK. This summer and September we’ve seen Intel release many Skylake-based processors and the Intel i5-6300HQ in this unit is part of the new releases.Currently, there doesn’t seem to be benchmark scores online for this processors just yet, but it’s expected to reach similar performance to some “regular” (not power efficient) i7s such as the i7-4712HQ.

That processor gets around 7500 CPU Mark points which is excellent, and since i5-6300HQ should get more or less the same you can pretty much do anything on this computer and if there’s a bottleneck, it won’t be this processor for sure. With this processors, the system stays cool even after several hours of operation and offers great performance and speed with top class functionality and a feature set .

On the game grid, the system will surely achieve rock-solid frame rates at Medium-quality (1,366 by 768 resolution), however pushing the settings higher will make the system stutter. You should be able to get these systems playing smoothly at native resolution, but it will involve some tweaking with antialiasing and quality settings. The only entry-level system that could play most modern game titles smoothly at Ultra-quality settings at its native 1080p resolution is the Alienware 15.

The latest generation of Core i5 processors performs more or less like the Intel i7-4712HQ which has a Passmark score of 7635 today (minus the hyper threading of the i7), helps improve battery life (of 6-cell lithium ion battery) so you can have it unplugged longer despite having a Thermal Design Power of 45 watts. This means that the Inspiron i7559-763BLK’s performance comes closer to Core i7-powered systems that cost slightly more, like the Dell XPS 15, the 17-inch ASUS X755JA-DS71 and the gaming MSI GT72 Dominator-406.

The 6-cell 74Whr battery is non-replaceable battery, as in you can’t just pop it out without removing the bottom cover. Dell claims that it can go for 10+ hours-a beefy one, but I don’t think you’re getting more than 4 hours if you’re gaming. If surfing the web etc. you should end up with more than 4 hours, though.

The Dell Inspiron i7559-763BLK is a good choice if you’re a content-creation hobbyists who likes to indulge in gaming once in a while. The latest Core i5 processor, brilliant screen, and clear speaker will definitely take home entertainment to the next level and even make creating the next YouTube masterpiece a pleasant experience. If you’re on a budget the price is right to grab it as your entry-level gaming laptop, thanks a future-proof design, stellar performance and ambitious pricing. The Inspiron i7559 is worth the buck in every inch, especially for the budding hardcore gamer and creative professionals alike. For that, it is our newest Editors’ Choice entry-level gaming laptop.

Well, that was in 2016 and the release of the Dell i7559 just coincided with the launch of Intel’s sixth generation line of CPUs codenamed ‘Kaby Lake’ that saw us enjoy more powerful systems for ever decreasing amounts of money. To date, it has remained a steadfast favorite among office users, college students and enthusiast gamers, alike. A lot has changed since then, and consumers preferences have shifted, dictated by need for even better performance and longer battery life. In 2018, Inspiron i7559 got a refreshed upgrade in the Dell G5587-7866BLK-PUS G5, that offers even better performance, tons of storage, improved battery life and useful connectivity options.

The newer iteration boasts a newer seventh-generation Intel Core i7-7700HQ processor, the latest NVIDIA GeForce GTX 1050 4GB (released in 2017), 8GB RAM,  256GB SSD + 1TB HDD combo for storage and all round connectivity. Surprisingly, the price hasn’t shifted greatly over its predecessor, and considering the feature set, it looks like you’re getting computer than what you’re paying for. For these reasons, the newest Dell G5587-7866BLK-PUS G5 replaces its predecessor as our Top Pick for entry-level gaming laptops. We reviewed it here. 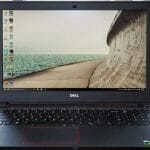