The Foodsaver V4400 is a simple 2-in-1 automated vacuum sealer that gives you all the convenience in the kitchen, especially when you need to seal foods. It does so in two ways – seals foods well in a plastic bag, as you would traditionally, and then gives you the extra feature of a vacuum hose to draw the air out of Food Saver or FreshSaver bags. And that’s exactly where it counts.

Sometimes in the kitchen, things can get clumsy, but you need gadgets that can do it on the fly, and the Foodsaver V4400 does exactly that. It manages to accessorize your modern kitchen, in a 2-in-1 approach that you don’t get with other food sealers.

Unlike most vacuum sealers, the Foodsaver V4400 offers what you rarely find out there: The vacuum hose is mounted on the machine itself, which is quite different from other models where you have to attach and detach it.

The vacuum hose is retractable, meaning it will always be ready when you need it, and you don’t have to look around the drawers to find it.

Very easy to use

If you’ve always wanted to grab the best food saver, this might be the sealer. As designed, you don’t have to look for different-sized vacuum sealer bags, unless you’re buying them for short-term storage. Instead, you can easily have a roll of material stored inside the Foodsaver V4400 vacuum food sealer, and use them when needed.

All you do is pull out the amount you want, use the handy built-in cutter to slide across the plastic to get the exact bag size you need. Once the bag is filled with food or whatever you’re preserving, simply place the open end of the bag against the sealing area and the machine automatically registers that there’s a bag there and starts to suck air out of it. You don’t have to push buttons or close lids; it starts working on its own.

In addition to ease of use, the Foodsaver V4400 does most of the job automatically. Once your food has been vacuum sealed inside a bag, the V4400 heat-seals the top to securely close it. It provides two closure seals, so the items you’re preserving will surely stay fresh.

Like the NutriChef Vacuum Sealer that we reviewed earlier, the V4400 works well for long-term preservation of expensive cuts of meat, fish, pantry staples including flour, sugar, spices and more. It works well with the FoodSaver or FreshSaver bags, which are best suited for short-storage of items such as cheese, deli meats and items you need to eat relatively soon.

Even with the impressive sealing capabilities of the Foodsaver V4400, it still has difficulty sealing wet foods, though. For instance, it does extract almost two grams of pineapple juice during sealing, which is a lot and also proof of the vacuum’s suction power. However, this is a common problem among vacuum sealers.

The Foodsaver V4400 Vacuum Sealer does well at preserving food and will surely help you save money by preserving food for both short -and long-term storage. In addition to that, being a 2-in-1 vacuum sealer, it is one of the best versatile and well-designed kitchen appliance for the modern kitchen.

However, it doesn’t deliver the best sealing at preserving for that are wet or juicy. On the other hand, the Hamilton Beach NutriFresh 78220 is one that does seal wet foods well. That said, the Foodsaver V4400 offers you a 2-in-1 automatic sealing, making it an easy choice to recommend. 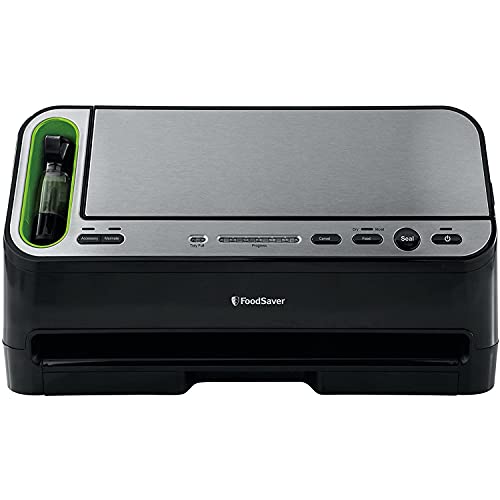