The Gigabyte M32U is a gaming monitor that can keep up well enough if you can drive it. It combines 4K and 144Hz to deliver a largely fluid and crisp experience at an obtainable price, and it doesn’t have a lot of competition.

The Gigabyte M32U gaming monitor is loaded with every feature pro-gamers may want and demand from their ideal displays – except for the traditional gamer looks. This 32-inch monitor offers an extra sharp 4K resolution alongside a high refresh rate that’s required for competitive gaming.

At around $800, this pairing doesn’t come cheap, and it has this intricate relationship with the Aorus FI32U, which is already an Editor’s Choice, though it costs a little more.

With these two monitors, Gigabyte ventures into the largely untapped space of large, high refresh rate 4K monitors, with the LGs and Asus of this world only sticking with the tried-and-true 27-inch monitors. As such, Gigabyte is capitalizing on the unexplored ground quickly with two new monitors – M32U and Aorus FI32U – with some unique gaming features in tow.

If all you need is to explore the ultrawide 32-inch, 4K territory and don’t mind having to give up a few things to get it and save a few hundreds of dollars along the way, then the Gigabyte M32U should be in your cart.

Gigabyte-branded monitors are never known to boast innovative designs and the Gigabyte M32U isn’t exceptional, but the Aorus FI32U does get some LEDs and bling on the backside. With the M32U, Gigabyte delivers a simple-looking monitor that resembles its other budget 1440p monitor – the M27Q, with an identical stand but without the gamer flair usually associated with 4K high refresh rate displays, like the Asus ROG Swift PG32UQ.

Simply put, the M32U doesn’t have any RGB or branding as you would on other gaming monitors. If that’s a must-have, you’ll need to spend a little more for the Aorus FI32U, which is a similar panel but from Gigabyte’s Aorus line of products. It has a more angular look that’s fit for gaming, with some RGBs on the back. Otherwise, both monitors use the same panel and that explains the price difference.

Without some flair on the body, the Gigabyte M32U design doesn’t feel like $800 well spent. Most monitors we’ve reviewed at this price point rock sleek design, and except for a bit of metal on the monitor’s base to break the plastic monotony, everything else is a matte plastic all around. And, if we factor the cost savings over the FI32U, we can give the M32U some leverage.

Elsewhere, the M32U can’t do everything the FI32U does: the pivot stand doesn’t offer height adjustment, meaning you’ll strictly view and use your Windows applications in landscape mode. But you can still raise or lower the screen by up to 5 inches, tilt it backward -5 degrees or forward up to 20 degrees, or swivel it 30 degrees both left and right. Also, it comes with VESA 100 mounting holes at the back should you want to prop it on a stand.

Port selection on the M32U is excellent, with the most outstanding combination being a pair of HDMI 2.1 ports. We reviewed the LG 40WP95C-W a few months ago and lauded it for being the first to feature Thunderbolt 4, but even recent high-end gaming monitors like the LG 34GN850-B are stuck with HDMI 2.0, which limits 4K output to 60Hz. With HDMI 2.1, you have the option to access 4K at 120Hz or 8K at 60Hz.

In addition to the two HDMI 2.1 ports, there is a DisplayPort 1.4, five USB ports (one Type-C, one Type-B, and three Type-A), and a headphone jack. DisplayPort reigns supreme for PC gamers still, but HDMI 2.1 is still a joy to use with next-gen consoles including the PlayStation 5 and Xbox Series X, as you can switch between them without refresh rate loss. The M32U comes with one more USB 3.0 port than the Aorus FI32U.

The Gigabyte M32U isn’t the greatest-looking monitor out of the box, but that’s what we’ve come to expect from $800, 32-inch 4K monitors with a high refresh rate. As ever with IPS panels, you don’t get the highest contrast ratio and the displays don’t get too bright, making the panel feel like the budget option it is and some more premium 4K displays.

Everything else checks out fine, except for color accuracy. Out of the box, it measures a Delta-E difference of 2.33, which is outside the range typical for color work, we’re often looking for a Delta-E value of less than 2 for a color-accurate display. Calibrating the display with the SpyderX cleans things up a lot, however, muting the Delta-E value to 0.5.

That’s impressive performance at this price range and more than acceptable for photo or video color work. The M32U’s post-calibration performance is much better than the LG 27GN950, a monitor at the same price as the Gigabyte M32U, but five inches smaller.

On specs alone, the M32U matches with competing 27in 4K displays like the Asus ROG Strix XG27UQR, only with larger screen size. Though smaller, the LG 27GN950 is the same price as the M32U and comes with higher peak brightness.

That’s great for HDR. The M32U carries VESA’s DisplayHDR 400 certification, not the DisplayHDR 600 of the LG 27GN950. With HDR on, the monitor looks like it’s attempting to pack too much dynamic range into too small of space, which is common with DisplayHDR 400 monitors.

A few peeping pixels is one thing, and taking the M32U out for a gaming spin shows where it really shines. On modern titles like Cyberpunk 2077, it offers super-sharp images at high refresh rates. This 144Hz panel isn’t as fast as, say, the 360Hz Asus ROG Swift PG259QNR, but that display is limited to 1080p. But you really don’t need an even higher refresh rate to know how good you’re in PC games, but it does help.

After all, 144Hz is the gold standard for gaming monitors for a reason. Same as jumping from 30 frames per second (fps) on an Xbox One to 60 fps on an Xbox Series X, you simply can’t go back to 75Hz once you’ve had a taste of 144Hz. It’s super smooth. Even games you play on your PS5 will feel really buttery smooth at 144Hz when played on your PC.

However, you should remember that simply because the Gigabyte M32U offers 144Hz doesn’t mean you’ll get to enjoy it in games. Native 4K is still overkill for most PC hardware. Even with the Asus ROG Strix GA35 that packs an RTX 3090 and an AMD Ryzen 9 5900X, you will be lucky to manage above 60 fps on games like Control of Assassin’s Creed Valhalla with all the candy turned up.

The high refresh rate is more useful in less demanding games like Destiny 2. In such games, everything looks great in 4K, especially with the ultrasmooth refresh rate.

Still, you’ll need some kickass hardware to take advantage of a display like the Gigabyte M32U. At minimum, you are better off with an RTX 3070 or RX 6800 XT if you plan to play modern AAA games at native 4K. Or, you can always cheat the resolution a bit with a feature like Nvidia Deep Learning Super Sampling (DLSS), which ropes in high refresh rates.

Unless you’re fine splurging around $3,000 on a killer gaming monitor like the Asus ROG Swift PG32UQX, you’re not going to find another 32-inch 4K gaming monitor with a high refresh rate. It’s in a unique class of its own, but that doesn’t mean it is an absolute best by default. There are far greater, yet affordable 27-inch gaming monitors around the same price, many come with better HDR and higher peak brightness.

If you’ve decided on 32 inches, however, there are not many alternatives for the Gigabyte M32U. Yes, there’s the Aorus-branded FI32U that’s aesthetically better, but that doesn’t justify spending an extra $200 for some LEDs on the back.

Overall, with the Gigabyte M32U, the company has crafted a monitor that ticks all the right boxes in a category where few monitors have, and at a very obtainable price.

Not many I can get hold of now. Outside of the Aorus FI32U and Asus ROG Swift PG32UG, which are both $200 more expensive, you aren’t getting anything to match the M32U. Many 4K high refresh rate gaming displays are available in the 27-inch range, including the LG 27GN950. But you can get higher brightness and better HDR performance if you sacrifice the 32in screen size.

Should I buy the Gigabyte M32U?

If you’ve settled on a 32-inch 4K gaming monitor, YES. The Gigabyte M32U is unlike any other 32-inch monitor, putting it in a class of its own by default. However, you can get better 27-inch 4K monitors like the LG 27GN950, which is what I’d recommend for most gamers. 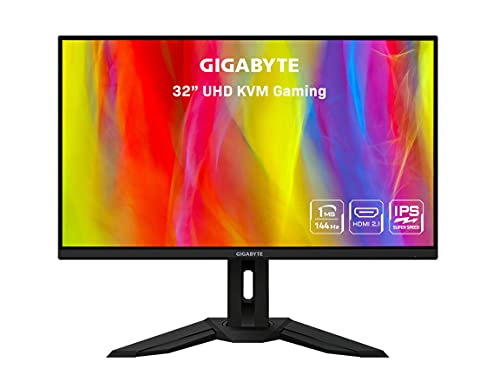