The Hisense 32H3B1 is an entry level LED HDTV that delivers good picture. It suffices for anyone in the market for a smaller screen that can perfectly fit in a guest bedroom, office, or kitchen, and don’t have much dollars on their hands to spend on a TV set.

Still, it suffices for anyone in the market for a smaller screen that can perfectly fit in a guest bedroom, office, or kitchen, and don’t have much dollars on their hands to spend on a TV set. Even so, you won’t get good picture quality as with our Editors’ Choice budget set, the 32-inch TCL 32S3800, that comes with Roku Smart TV features for roughly the same cost.

The 32H3’s overall design is nice looking, thanks to a half-inch flat frame, a glossy black plastic bezel on the sides and top, and a wider, silver-colored bezel on the bottom edge. On the bottom bezel rests the Hisense logo in the center, while a small bump on the lower left hosts the remote sensor. The set rests on two silver-colored, shallow, U-shaped legs that give the screen the stability it needs. In fact, it bears the same design as its bigger sibling, the Hisense 50H8C, safe for a larger screen, Smart TV features and 4K support.

A navigation pad that doubles as Channel Up/Down and Volume Up/Down controls, along with Power and Source buttons, sit on the lower left corner of the back of the TV. On the set you have a total of 3 HDMI ports, 1 USB port, 1RF, 1 component, 1 Composite and 1 Optical connector. For a basic television, that’s the much we’d expect, but they’re slightly awkwardly placed if you want to mount the set on a wall.

The 7-inch remote is small, flat, and simple. The buttons aren’t backlit, and are clustered together fairly closely, so entering numbers blindly takes some practice. On the other hand, the direction pad is large and distinct enough to find easily with your thumb. In fact, the remote on this set is the Hisense TV Remote EN-KA92, meaning you can buy a replacement separately in case you lose the one that comes bundled in the package.

Let’s face it, the Hisense 32H3B1 is a basic, entry-level TV set; and, it remains that. No dimming output that out of the ordinary. No fancy 3D. No fancy Smart Features either. This is only a 720p screen, so you really don’t expect full 1080p HD resolution, but for its small size that’s not a major flaw. The only issue you might have with the picture output on the 32H3 is washed out shadows and sometimes muddled greens, otherwise everything is appreciable on this set.

I watched The Amazing Spider-Man, and the output was quite OK; with overall sharp, bright picture combined with well-balanced colors. The black levels are slightly behind the TCL 32S3800’s which revealed decent shadow detail, although in the darkest parts the alley scenes were blotted out.

Input lag (time between display receiving signal and updating screen) isn’t bad at 52.7 milliseconds, which is quite good for a television set; though the TCL 32S3800 has its input lag at 29.3 milliseconds. Changing the mode, for instance into Game mode, will give you a reduced input lag but it eats on the general picture quality. Not a worthy trade-off.

Viewed under normal conditions, the 32-inch Hisense 32H3B1 will consume anything close to 29-30 watts of power. Adjusted for viewing in Low Power mode, it shaves the consumption down to a mere 24 watts, but the screen gets slightly dimmed in the process. This is quite good for an HDTV, but factoring its size and low-resolution panel, it isn’t surprising. The 40-inch TCL 40FS3800 with a 1080p panel consumes 63 watts under normal conditions, but in Eco Save mode the consumption is scaled to 51 watts.

The Hisense 32H3B1 is a capable, budget set that comes with the same rough edges you get with many other budget TVs: a lack of features and not-so-good picture quality. The colors, despite looking undersaturated, are relatively accurate and acceptable, especially, compared with some other budget models we’ve seen in the market. The design gives it a premium look, and can be easily confused to a more expensive set; in your guest room it won’t unnecessarily scream ‘cheap’.

However, you can get an overall better picture and Roku TV Smart Features for around the same cost with the 32-inch TCL 32S3800. And the 32-inch VIZIO E32-C1 remains our best bet for the budget television category. It maintains the same Roku TV features, but gets smarter in way of a 1080p resolution, and offers better contrast and surprisingly good color accuracy. 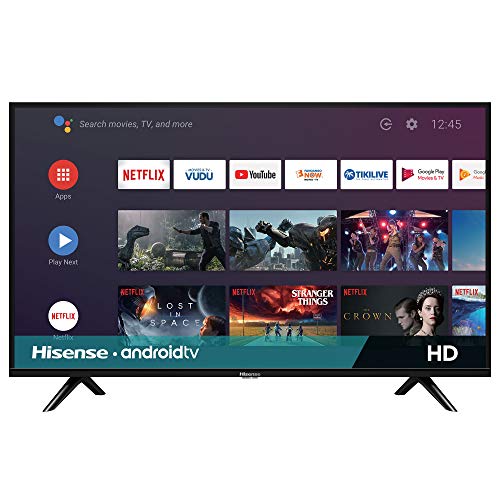