The Hisense U8G (55U8G, 65U8G) 4K ULED Android TV is a stellar QLED TV, regardless of the price. It impresses on several fronts, everything from its brightness, color and lag time to its excellent contrast and detail, the Hisense 65U8G runs the show as one of the best TVs.

The Hisense U8G replaces our favorite 2020 Hisense H9G, and it’s without a doubt, a stellar TV. For years now Hisense has been delivering impressive TVS like the Hisense U80G ULED 8K that have outmaneuvered the big boys like Samsung, Sony and LG with reasonable prices but without many compromises. Now, with the Hisense 65U8G ULED 4K Android TV, the electronics manufacturers is taking how you watch TV a notch higher.

For a very reasonable price, they have crafted a ULED 4K Android TV that’s a perfect shoo-in for pretty everyone – from gamers with next-generation consoles to movie fanatics and everyone else in-between.

If you go by the Hisense U8G’s specs and numbers alone, you’ll realize that it packs the best technology you’d ever find on an TV in 2022. Yes, it offers a full suite of Dolby features including Vision, IQ, and Atmos, then it goes further to also include HDR10+ and native 120Hz panel. All these are controlled via the Android TV operating system that includes both Google Assistant, built-in Chromecast and voice controls with a privacy switch.

All that said, the Hisense U8G is a great TV, and particularly a great buy for anyone looking to purchase a well-rounded UHD television that packs a robust feature set without spending an arm and a leg. It deserves a top spot in your shopping list.

The biggest difference between these two Hisense U8G models is the number of local dimming zones: the Hisense 65U8G has 360, while the Hisense 55U8G has 132. Even with that slight difference, we expect the two TVs to delivers similar performance.

We’ve seen thinner and slicker looking TVS than the Hisense U8G, but it gets itself some design elements that make it splendid. The case of the 57.1 x 13.6 x 35.6-inch TV is mostly dark, hard plastic. The case houses a quantum-dot LCD with full-array backlighting with 360 local dimming zones, that produce a uniform picture all the way to the edges.

The back of the TV sports a diamond pattern, while the front of the TV features a slim bezel and a metal strip at the bottom bezel and a few angular touches that give the U8G design some flair.

Speaking of design flair, the Hisense U8G stands out in the crowded 65-inch TV niche. Instead of adopting a boomerang style that’s a bit of cliché nowadays, Hisense uses a pair of triangular feet that form an arch for the TV to rest on. It’s eye catching – whether that’s what you’re looking for in a TV stand is a matter of personal preference. What matters most is that the stand provides a sturdy, and fairly wide base.

If you don’t like the stand or it doesn’t offer enough space for your sound bar, you can prop it to a mount that supports 400 x 300 VESA pattern.

Next to the HDMI ports, there’s an RF antenna input and a single composite video input, alongside two USB ports. For sound, you can connect via the 3.5mm headphone jack on the side or optical audio or 3.5mm serial input on the back, or simply go wireless with Bluetooth. The U8G offer both Wi-Fi and wired ethernet for network connections.

The bundled remote control for the U8G isn’t as versatile as the remotes from Roku or Apple TV, but it does the job in terms of navigation. The remote also has a Google Assistant button alongside Android TV software controls. Like many other remotes, there are quick buttons that will launch apps like Netflix, Disney+, Prime Video, YouTube, Tubi and Peacock.

The IR remote has Bluetooth built-in but you’ll have to mainly connect it through the menu button which seems a little odd. When used in the dark, however, navigation is simple due to backlight.

Like the TV design, the remote control has one unique feature. In this case, it has a flat bottom that lets it stand up vertically. The flat base makes the remote a bit bottom heavy, but that doesn’t affect use. Beyond that, there’s nothing special about the remote but it definitely gets the job done.

Powering the 65U8G is Android TV, one of the richer TV operating systems. It brings a lot of features to the TV platform, but Android TV can tax some TVs, but on the U8G it is very responsive, menus load quickly and apps launch in seconds.

The Home screen by default displays recommended shows, favorite apps and shows that you’re currently watching. You can tweak the settings your liking, customize the home screen to show personalized recommendations, and you can as well pick your favorite apps. Also, you can choose which apps will show you more detailed recommendations. For instance, you can have YouTube show the latest recommended documentary videos and music on the home screen instead of launching the app to see them.

Android TV offers just about every app you’d want, from basics like Netflix and Prime Video to the latest favs such as Disney+ and HBOMax, as well as Apple TV, Paramount+, Peacock and many more. And if you have a missing app and need to share content from your phone, the U8G has built-in Google Chromecast. Simply put, this is one of the best smart TVs for streaming your favorite content.

Also, the Hisense U8G comes with hands-free Google Assistant, all thanks to built-in far field microphones that make the TV to function like a smart speaker. With this feature, you can turn the TV on and off, launch Netflix and open the TV’s other settings menu with your voice. Google Assistant is very responsive to each command, and you can use Alexa with the U8G through the Hisense Smart TV skill – meaning you can pair it to your Amazon Echo Dot when needed.

Hisense’s ULED technology impresses immediately on the 65U8G with its color and contrast. This technology continues to improve on every new model the company releases, and the result is rich, beautiful colors and deep blacks that make shows, films and games look jaw dropping.

Beyond offering a decent 4K resolution, the U8G’s native 120Hz screen supports IMAX Enhanced, FilmMaker Mode, Dolby Vision, Dolby IQ, HDR10+/HDR10 and Quantum Dots. On the 65-inch model in this review, dimming zones have been increased from 180 to 360 alongside a dynamic contrast ratio of 10,000:1 and up to 1,500 nits peak brightness. This means that no matter the viewing angle or brightness of the room you’re viewing in, picture quality remains magnificent.

The Hisense 65U8G has a built-in special anti-glare as well. As mentioned before, the U8G is certainly the most well-rounded television from Hisense (going by its feature), but the excellent picture quality is the winner.

It packs a slew of picture setting options from brightness to picture modes. For sports lovers with a keen eye for visuals, the various motion enhancements are simply exhilarating. It’s definitely noticeable even during testing as some of the biggest sports event in the world, the 2022 UEFA Champions League Final looked gorgeous. Another great sports example is Netflix’s Naomi Osaka documentary that takes advantage of Dolby Vision and HDR10.

Cinephiles will appreciate FilmMaker Mode which automatically disables post-processing while preserving correct aspect ratios, colors and frame rates as intended by the filmmaker. Older monochrome films or anything released before digital cameras took over look great. As such, classics like A Fistfull of Dollars, Bullitt and even films like TNT Jackson look amazing.

Elsewhere, audio quality is consistent alongside Hisense’s newer crop of TVs. If you’re looking for a louder cinematic experience, you might as well consider a soundbar or speaker system. On its own, the Hisense U8G built-in speakers offers an average audio experience. Though the TV can get incredibly loud, audio quality takes hit once users go beyond the 20 point range.

Is U8G good for gaming?

While the U8G isn’t as gaming-centric as the U7G, there’s still much for gamers to like on this TV. In addition to offering 4K with a 120Hz refresh rate, the 65U8G also features a Game Mode Pro which has VRR and FreeSync Premium for improved input lag. Though next-generation consoles from both Sony and Microsoft are yet to truly utilize the full potential power, there are some games that look truly phenomenal on the U8G.

Some PS5 games like Ratchet & Clank: Rift Apart support 4K/120Hz and it’ll not be difficult to switch back to 60Hz once players get a chance to sample it out. Also, there are more games on the Xbox Series X|S like Mass Effect Legendary Edition that really feels as if it enhances gameplay.

Should I buy the Hisense U8G?

Absolutely. The Hisense U8G 4K ULED Android TV is a stellar QLED TV, regardless of the price. It impresses on several fronts, everything from its brightness, color and lag time to its excellent contrast and detail, the Hisense 65U8G runs the show as one of the best TVs. It runs Android TV quickly and smooth.

However, I have a few quibbles with motion smoothing, but that can. Easily be overcome by turning it off (or down, if you prefer) and the average sound can easily be fixed with a soundbar. It’s only mediocre viewing angles that you’ll have to live with.

The price premium of the Hisense 65U8G over the Hisense 65H9G will not turn you off, unlike during launch when the U8G costs hundreds of dollars more. If you’re looking for a less expensive TV, the TCL 6-Series 55R635 will save you a couple of hundred bucks and delivers nearly as good performance. 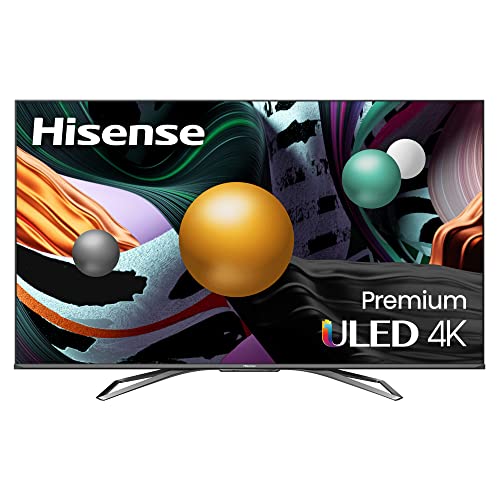 But with all you get, the Hisense U8G offered at this price is immense value, especially compared to 65-inch 4K models from Samsung and LG. It’s hard to beat the combination of features and picture quality of the Hisense 65U8G 4K ULED Android TV.