The Hisense U8H (55U8H/65U8H/75U8H) is a great TV that offers tremendous brightness, contrast, and color performance. It displays 4K content in SDR, HDR, and Dolby Vision as good if not better than TVs that cost two or three times as much.

The Hisense U8H is the company’s first mini-LED television, and we simply can’t recommend it highly enough. In designing the U8H series, Hisense was all about bringing high-end features to a mid-level price range; and sure, this TV packs a light sensor for Dolby Vision IQ that can raise or lower the brightness to match the ambient light in the room.

Also, it features a Mini-LED panel that has up to 528 local dimming zones and its peak brightness exceeds any TV around that price, making its picture quality as good as some of the best TVs we’ve reviewed this year.

We’re reviewing the Hisense 65U8H – the 65-inch model in the Hisense U8H range, and we feel it’s the brightest LED TV in its price bracket, making it an incredible choice for bright rooms. Its local dimming is among the best I’ve seen all year, and it exceeds more expensive LED TVs. And while its gaming performance doesn’t match those higher-end TVs, there aren’t many with a stronger selection of gaming-centric features at this price point.

Huh, the Hisense U8H isn’t a perfect TV from every angle. For one, Hisense’s picture processing has just got better this year, and so have competitors, but the Hisense 65U8H and its siblings still struggle to upscale sub-4K content cleanly, and there’s still some serious color banding while gaming.

As with most LED TVs, the U8H’s picture loses contrast and color saturation when viewed off-axis, but if you can look past some of these flaws (as I did), you’re getting yourself a TV that impresses almost everyone, particularly folks looking to save money in the savviest of ways.

About the Hisense U8H

The Hisense U8H is available in three sizes. We’re receiving the 65-inch model. Here are the three models in that series:

As expected, there won’t be major differences in performance between these sizes, typically each size variant of a mini-LED TV series features a different number of dimming zones. As such, the number of dimming zones increases proportionally to a TV’s size. A difference in zone count could mean slight differences in how a TV’s contrast performs. According to Hisense, TVs in the U8H series features up to over 500 zones and we can assume that this figure applies to the largest size in the series.

Having defined the sizing, let’s look at the U8H’s key specs:

For connectivity, the Hisense 65U8H (and the other two models) offers a great selection of inputs for a TV in its class. Here are the ports you’ll find in the small cutout on the back of the TV’s panel:

In the age of super-sleek OLEDs like the LG OLED65C2PUA, the Hisense U8H doesn’t have one of the flattest profiles or cutting-edge designs, but it does a good job of keeping bezels to a minimum. It sports a long, noticeable silver bar along the bottom that hosts the Hisense logo, but the rest of the edges are all screen.

Again, unlike OLED TVs, the back of the Hisense U8H isn’t slim. It adds some weight from front to back at a depth of around 3 inches, not very unreasonable, but it’s going to hang out a bit should you decide to wall-mount it. It uses standard VESA 400 x 400mm brackets, so it won’t be a difficult job, but inside the box, you’ll find two legs if you’d rather put it on a table.

The included remote for the Hisense 65U8H is like the design itself: very functional but not stylish. We expected something more stylish, maybe close to the Wii-like motion remote included on LG’s OLED TVs, instead, the Hisense U8H’s remote is a simple Bluetooth voice remote with a built-in microphone and hot buttons to the most popular streaming services.

As mentioned above, the Hisense U8H TV is a fantastic option for a brighter-than-average room thanks to its decent motion smoothing that’s backed by excellent contrast and color. While it isn’t as bright as the Samsung QN90B which uses similar display technology, it still looks stunning, and keep in mind the QN90B is a much pricier TV. Placed side-by-side with similarly priced TVs, the U8H is one of the brightest. Not only does it offer brighter HDR (high dynamic range) highlights than the TCL 6-Series, but its overall picture is also brighter.

On the other hand, the U8H’s black levels aren’t quite as deep as we’ve seen from recent LED TVs, but paired with the U8H’s higher-than-average brightness across the board, they’re deep enough to get the job done. We’re talking of around 0.08 to 0.1 nits on average, which is on par with the TCL 6-Series. Like the TCL 6-Series, the U8H’s black levels are at their deepest during dark scenes and appear slightly lifted during average-lit scenes.

More impressive, however, is Hisense’s implementation of mini-LED backlighting. The Hisense U8H’s local dimming is as good – if not better than what we’ve seen on several more expensive mini-LED TVs on the market since last year, including the Samsung QN90B and the Sony X95K. The Hisense 65U8H handles light bloom pretty well, even while bright picture clashes with dark backdrops.

Like most top-tier TVs this year, the Hisense U8H comes with Google TV smart platform built right in. A refreshed successor to Android TV, Google’s software is easy to pick up on the fly and crucially darn fast. As with all smart platforms, you’ll quickly learn to navigate around a host of sponsored content, but it’s faster than Samsung’s newest Tizen OS and the user interface is easier to navigate than LG’s webOS.

While Hisense’s picture processing has a few quirks, we still appreciate that the U8H’s processing has undergone major improvements and offers the cleanest picture I’ve seen from a Hisense TV. Everything, from upscaling to motion handling, content just looks better on the U8H than it did on the Hisense U8G and Hisense U7G.

Finally, I’ve got to applaud Hisense’s engineers for packing some of the best-sounding and most powerful subwoofers into the back of a competitively priced, value-first TV. In addition to great picture, the Hisense 65U8H sounds sweet, offering a bigger, clearer soundstage than just about every other TV in its price range. If you’re 3not looking forward to investing in a dedicated soundbar, the Hisense U8H is a pretty safe place to start. 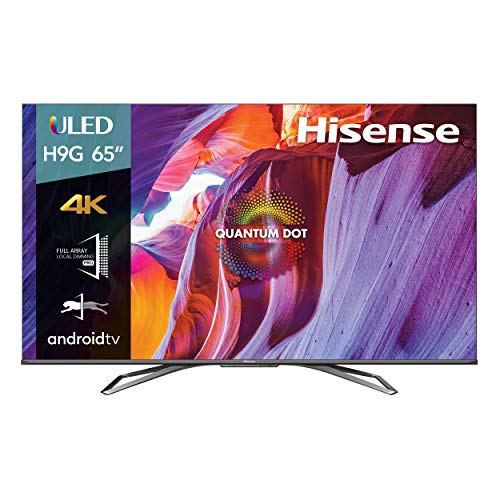 Should I buy the Hisense U8H?

The Hisense 65U8H is a great TV that offers tremendous brightness, contrast, and color performance. It displays 4K content in SDR, HDR, and Dolby Vision as good if not better than TVs that cost two or three times as much. And for gamers, it’s a great choice, and it offers terrific sound to boot.

That said, the Hisense U8H struggles with boosting up lower-resolution content and resolving some low-framerate motion. Tweak a few settings and you’ll find that things can become substantially clearer, but if you’re looking for an excellent out-of-the-box experience, you’ll have to look at higher-priced OLEDs like our Editors’ Choice, the LG C2 OLED TV.