The HP 14-an013nr is a basic laptop made for folks who find svelte, inexpensive Chromebooks attractive, but really, really need Windows. The HP 14-an013nr runs on full Windows 10 Home, so you no longer have to worry if you have an old favorite program; or can’t bring yourself to use a browser-based laptop.

On the plus side, the system is one of the least expensive Windows 10 laptops we’ve seen with a 14″ Full HD (1920-by-1080) IPS UWVA Brightview WLED-backlit display, which counts for a lot.

There are some rough edges along the way, like only 32GB of storage and occasional wait for the PC to finish tasks you’re performing. It is a value PC, considering the competition from Chromebooks, it is ideal for anyone who must have Windows and on a tight budget. If your needs check both boxes –Windows+affordable–, then this inexpensive HP 14-an013nr is worth having at the top of your list.

Compact is the only word that can best describe the HP 14-an013nr. It measures about 0.94 by 13.6 by 9.5 inches (HWD) and weighs exactly 3.9 pounds. It is fairly portable and easy to carry around, or even stuff into a school carry-on bag. The good thing with the clamshell design is that the system isn’t top-heavy as is the case with most desktop-replacement laptops.

It’s a little heavy compared to the Chromebooks its meant to compete with, but it’s certainly portable enough for the home or college campus.

The body sports textured line grooves, set in horizontal brushing accented with turbo silver, with the plastic appearing to have higher quality than some of the inexpensive laptops and Chromebooks we’ve seen. The chiclet-style keyboard, is full size and easy to type on, and the touchpad is responsive.

The keyboard isn’t back-lit, but we really didn’t expect that at this price level. Being a compact system, you’ll, however, have to get used to a slightly smaller keyboard. For instance, the up/down arrow keys are tiny but the row function keys are quite standard as they default to PC functions such as screen playback and media functions.

There is a good selection of I/O ports on the laptop, especially considering that there isn’t a lot of physical room on the sides of the chassis. You’ll find an Ethernet port, a headset jack, an SD card reader, a USB 2.0 port, and a USB 3.0 port. For wireless connectivity, you have 802.11 a/c and Bluetooth is also supported.

If we get nitty, HP often uses the same black color for USB 2.0 and USB 3.0 on most budget laptops. On most PCs and hard drives, the USB 3.0 port is colored blue, making it easy to distinguish between the two to aid users.

The system comes with an energy sipping 1.8GHz quad-core AMD E2-7110 QC processor with built-in AMD Radeon R2 Graphic. This is a basic processor that only promises to have the work done, nothing more. Basic computing tasks. The AMD E2 will deliver on most casual computing tasks and the 1080p (Full HD) display will brighten up things. Along the way battery life might suffer, but it’s still a good tradeoff to bring the system to an affordable price range.

The HP 14-an013nr is ideally meant for folks who want to browse the web, stream movies and music on the brilliant full HD screen, Skype chats and maybe use MS Office processing. If your needs are more than that, you’re better off with a budget desktop-replacement system that can handle most of your tasks.

To get to its budget price, the HP 14-an013nr skimps on system memory and storage; there are only 4GB of memory and a 32GB eMMC storage, which should not be confused with a true SSD storage. This is quite limiting for an otherwise great laptop, but the system comes with an SD Card slot, which allows you expand your storage with SD cards with large capacity like the 128GB SanDisk or even an external HDD like the Samsung T3 portable external SSD.

Plus, the system is targeted at basic users, who don’t need a lot of space, and are comfortable storing most of their stuff online, which is the same in competing Chromebooks.

It comes with 4GB memory which isn’t badly off for the price level as it allows you open multiple browsers windows without slowing the system down. Most PCs will have 4GB to 8GB of memory, and some will even include snappier solid-state drives (SSDs), but it isn’t a dealer-breaker for this inexpensive laptop PC.

The HP 14-an013nr will be a passable Windows PC, and its full HD screen is a plus, but it may only feel a bit faster than your old PC while you wait for programs and videos to load. The Asus F555LA-AB31, our Editors’ Choice budget laptop, is ultimately an even better choice for Windows users on a budget thanks its great design, powerful Intel Core i3 processor, 4GB memory, 500GB storage and a brilliant full HD (1080p) screen.

For those on strict budget and Windows is a must-have in the laptop of choice, the 14-inch Acer Aspire 1 A114-32-C1YA is a perfect shoo-in. At this price range, you can get your hands on a nicely designed and better speced Chromebook, but the lacks of Windows OS is a major hindrance to many of us. Thus, the only impressive alternative must be the Aspire 1 that costs less, but is a far-better version of the repulsive, low-res devices we see in this price range. We reviewed it here. 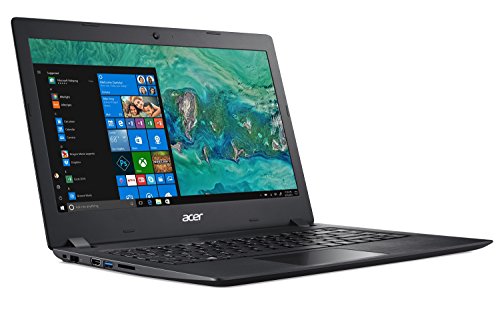