The HP 15-ay191ms may pass as a basic, budget laptop, but it’s a Windows 10-equipped signature laptop with a seventh-generation processor, enough system memory and storage as well as touch capability, but selling for around the same price as a Chromebook.

In 2017, competition in the budget desktop-replacement category is getting intense, and as buyers we can afford a smile as that means low prices for laptops with solid feature sets. Case in point: the HP 15-ay191ms, a signature edition laptops that comes with a seventh-generation Intel Core i3 processor, 8GB DDR4 system memory, 1TB of storage and a touchscreen, but still remains insanely affordable. It’s one of those laptops you’d buy without a second thought if you find inexpensive Chromebook attractive, but really, really need Windows.

The HP 15 runs on Windows 10 Home (64-bit), so you won’t ever have to worry if you need to use an old program has it has backward compatibility with previous Windows versions. On the plus side, the system is among the least expensive touch screen laptops we’ve seen lately, and that counts for a lot. There are a few rough edges along the way, including sluggish performance on complex tasks, but if Windows and minimal price tag are must haves, this budget system is worth a long look.

If you’re hunting for value, chances are a sleek design are the very least of your worries, but the HP 15 strikes a subtle balance with its utilitarian style. The top of the chassis is a ridged, dark-gray plastic, while the bottom bezel is the usual textured plastic. It measures 0.9 by 15.1 by 10 inches (HWD) and weighs 4.6 pounds.

Supporting the touchscreen is a hinge that provides a decent amount of friction to keep the lid from wobbling when you move tap the screen, though it does bounce especially when playing a game. Still, it isn’t very sharp and the experience isn’t as smooth as with its premium rivals, but it gets the work done for anyone who wants to tinker with touch capability on a laptop screen.

Typing is relatively comfortable on the full-size, chiclet-style keyboard, which also includes a 10-key number pad. If you’re always typing, you’ll realize that key travel is a little short for your liking, but otherwise they work as they are supposed to. Like in most budget HP models, the keyboard and touchpad are bordered by a slight indentation, which makes the touchpad almost invisible safe for a par of click buttons at the bottom.

The speakers are located at the bottom front of the chassis, one on the left and one on the right. You wouldn’t expect pristine audio on a budget laptop, but the placement of the speakers doesn’t help. The sound doesn’t get particularly loud, even at top volume, and overall has a tinny quality. In particular, higher pitches generate scratchy feedback.

Port selection is on the lean-side, which is expected of a budget system. Here you get two USB 2.0 ports, one USB 3.0 port, and HDMI-out port and a DVD burner, which is a plus since most manufacturers are ignoring them since almost everything is now available online. Talking of Internet, you’ll be able to connect through an RJ-45 port, while wireless connectivity comes via an 802.11n Wi-Fi+ Bluetooth 4.0 combo adapter. The system has 1TB of local storage on a 5400rpm hard drive and a webcam in the top bezel. This is a Signature Edition laptop, which means that it comes without bloatware, so you should have enough storage space straight out of the box.

To get to its budget, the HP 15 didn’t skimp on crucial features such as system memory and storage: there is 8GB of DDR4 memory and mass, albeit slow 1TB hard drive storage. Most PCs in the same category will have 4GB to 8GB of memory, and some will even include speedier solid-state drives, but that will surely hike the price.

It adds a seventh-generation Intel Core i3-7100U processor with Intel HD Graphics 620, and you have a PC that rivals most fifth-generation Intel Core i5-powered desktop PCs. With a CPU Mark score of ~3800, this system gets as close as you’d get to most i5-level performance ideal for most day-to-day tasks including opening applications, typing   documents, Web surfing, and composing and reading email.

As expected, gaming performance on a budget laptop will surely put you back a few miles, with middling performance. The Integrated Intel HD 620 graphics card will not run very acceptable frame per second (FPS), but if you insist you can give it a road-run at medium settings (720p). Don’t expect butter-smooth frame rates per second (fps) with this laptop.

Battery life is at the middle-of-the road for a 15-inch desktop replacement laptop. The HP 15’s 3-cell 31Whr battery lasted 3 hours 27 minutes on our battery rundown test, staying behind last year’s Dell Inspiron 15 (4:16) by more than an hour and the larger Dell Inspiron 17 5000 Series (5:26) by almost two hours.

If you’re hunting for value in a laptop, the HP 15-ay191ms is very attractive, to be sure. But you need to first ask yourself if you’re buying a system to surf the Internet, or do you need a full-fledged Windows PC? For Web surfing, for you might be safe with a Chromebook such as the Acer Chromebook R 13 Convertible, but if you must have Windows affordably, then the HP 5 will be a passable Windows PC, and its touch screen and seventh-generation Intel Core i3 processor are a plus, that will be way faster than your old PC. 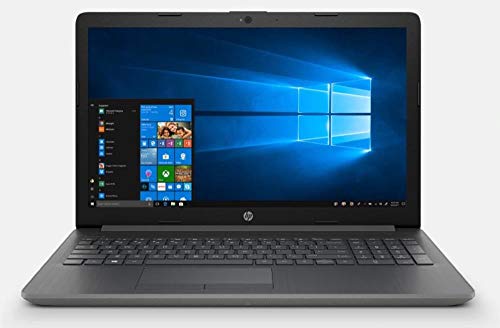