The HP 15-ay196nr is a desktop-replacement that packs a decent set of features including a Kaby Lake processor and a nice 15-inch touch display. The omission of full HD capability and slow 5400rpm hard drive might be a deal breaker for some, but the affordable price helps mitigate complaints.

As technology improves and laptops keep getting more powerful and affordable, the lines between traditional categories are going to blur even more. Not long ago, a laptop like the HP 15-ay196nr equipped with a touchscreen and the latest seventh generation Intel Core i7 processor would have cost almost double what its current price. Luckily, it now falls in the range of what we’ve long called a desktop-replacement. Whether it’s ultimately ideal for you depends on exactly what your needs are, but its combination of features is rich enough to have most users satisfied including office work, college and even home entertainment.

If you won’t be engaging in high-end gaming or media creation–in which case, you need a laptop with a dedicated graphics card– then you’re most definitely covered by this 15-inch notebook. It draws the parallels between basic and professional-level desktop-replacement laptops, making it an easy choice to recommend for basic day-to-day use. Though it lacks the chops to unseat the HP 15-ay018nr as our Editors’ top pick budget desktop replacement laptop.

There is a lot of design continuity between last year’s HP 15 series and the HP 15-ay196nr, meaning a lot hasn’t changed in the looks department. The system measures 2 by 15 by 12 inches (HWD) and weighs 4.7 pounds, it is still light enough for short jaunts and room-to-room travel. Its lid and keyboard deck are clad in a silver, while the bottom of the chassis is set in black plastic. This is just fine, as we didn’t expect an aluminum chassis, although ultraportables in the same category now come with metallic chassis, but tend to cost more.

Beneath the lid are a 15.6HD SVA WLED-backlit touch screen and a comfortable keyboard deck. The display’s 1,366-by-768 is quite mean as we at least expected a Full HD (1920-by-1080), which is now quite common in the desktop replacement. Still, I tend not to see a difference between 720p and 1080p in such a small screen. nevertheless, it would be nice if we had a superior resolution in an otherwise superb notebook.

The display offers 10-point capacitive touch, with a sturdy hinge that stands up well to taps and pokes, and which will hold the display in place without unexpected wobbles while using the touch screen. The 2017 iteration of the Inspiron 15 comes with a full-size, chiclet-style keyboard, with a non-backlit keyboard, which would have been handy when you need to type in dark and dim environments. A large touchpad opens your world to full gesture support, accentuated with the same swiping and zooming capability as the touch screen.

Connectivity is quite standard. Here you get an assortment of I/O ports including one USB 3.1 port, two USB 2.0 ports, HDMI port, SD/MMC card reader and a Headphone output/Microphone input combo. Internet connectivity is done through an RJ-45, while wireless connectivity comes via 802.11bgn wireless and Bluetooth 4.0. Other are a DVD +/- RW drive and a front-mounted webcam for skype chats and video conferences.

To get to its budget, the HP 15 didn’t skimp on crucial features such as system memory and storage: there is 8GB of DDR4 (not user upgradable) memory and mass, albeit slow SATA 1TB hard drive storage. Most PCs in the same category will have 4GB to 8GB of memory, and some will even include speedier solid-state drives, but that will surely hike the price.

To that, add a seventh-generation (Kaby Lake) Intel Core i7-7500U processor (2.7GHz, turbo up to 3.5GHz) with Intel HD Graphics 620, and you have a PC that eschews most seventh-generation Intel Core i7-powered desktop PCs. With a CPU Mark score of ~5300, this system gets as close as you’d get to most i7-level performance ideal for most day-to-day tasks including opening applications, typing   documents, Web surfing, and composing and reading email.

As expected, gaming performance on a budget laptop will surely put you back a few miles, with middling performance. The Integrated Intel HD 620 graphics card will not run very acceptable frame per second (FPS), but if you insist you can give it a road-run at medium settings (720p). Don’t expect butter-smooth frame rates per second (fps) with this laptop. It managed only 10.5 FPS on The Witcher 3 (medium settings) and 29 FPS on GTA V under the same settings. The Acer Aspire 15 returned 24 fps on Fallout 4, 19 fps on The Witcher 3 and an impressive 69 fps on GTA V (medium settings).

Battery life is at the middle-of-the road for a 15-inch desktop replacement laptop. The HP 15’s 3-cell 31Whr battery lasted 4 hours 8 minutes on our battery rundown test, though HP claim that it can last up to 9 hours on a single charge. This is slightly behind last year’s Dell Inspiron 15 (4:16) by a few minutes and the larger Dell Inspiron 17 5000 Series (5:26) by almost one hour.

If you’re hunting for value in a laptop, the HP 15-ay196nr  might be attractive, to be sure. But you need to first ask yourself if you’re buying a system to surf the Internet, or do you need a full-fledged Windows PC? For Web surfing, for you might be safe with a Chromebook such as the Acer Chromebook R 13, but if you must have Windows affordably, then the HP 5 will be a passable Windows PC, and its touch screen and seventh-generation Intel Core i7 processor are a plus, that will be way faster than your old PC.

That said, the slow hard drive, low resolution screen and non-user upgradable memory are tradeoffs you need to consider first before as deal breakers or not. If touch isn’t must-have, the HP 15-ay018nr presents better value in terms of an Intel Core i7 processor, 8GB memory, a Full HD (1920-by-1080) and 256GB SSD storage. All these make it a smart buy worth a long look as you shop around. 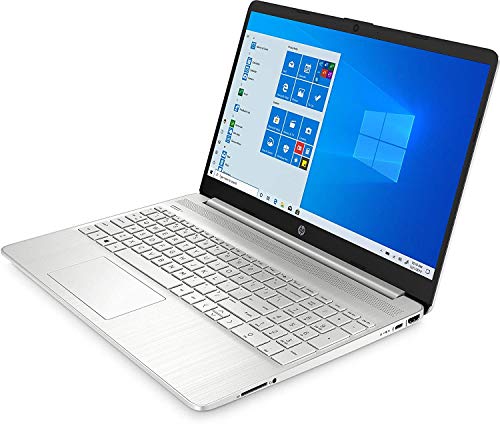