The HP 15-ba009dx is very attractive for basic users on a budget, to be sure. It isn’t the cheaper as you have less expensive options, especially chromebooks, and there is certainly no lack of more expensive ones. But if you’re looking for as bargain deal, the system generally delivers on what it promises and gets the job done, provided you won’t throw complex tasks its way.

The HP 15-ba009dx doesn’t struggle to shine in the basic laptop category. It is made for folks who find inexpensive chromebooks attractive, but having windows is a really, really must-have in the laptop of choice. If that’s the case, this system stands out as a perfect entry into Windows 10, with a basic feature set: AMD Quad-Core A6-7310 processor; an entry-level Radeon R4 graphics card; 4GB system memory, 500GB storage; and, nothing else. The large 15.6 screen and full-sized keyboards count for a lot, making the HP 15 adequate for everyday tasks such as college assignments, spreadsheet processing, Microsoft Office projects and casual multimedia consumption.

However, if your needs encompass complex tasks that require some muscle to process, you’re safe looking elsewhere since this system isn’t the most comfortable. For folks who are after a minimal price tag, the  15-ba009dx is a decent laptop, but the  but the Acer A515-46-R3UB remains our Editors’ Choice thanks to superior performance and reasonable pricing.

For a bargain hunters, we’re certain that a fancy design isn’t among the things you’re looking out for, and the 15-ba009dx doesn’t sport a fancy design, rather, it adopts a utilitarian style. It sports a matte-black chassis with decorative glossy stripes across the lid alongside a silvery ‘HP’ logo. It measures 0.9 by 15.1 by 10 inches (HWD) and weighs 4.8 pounds.

What the low-resolution means is that, with a closer look, you’re able to pick out the individual pixels, but that really doesn’t lock you out of a YouTube video or reading your mails.  Also on the screen is a glossy, reflective coating, which might compromise your work outside or under bright lighting, thereby, forcing you to fiddle around for a good viewing angle to avoid the excessive glare.

Port selection is pretty standard for a budget laptop. It comes with one USB 3.0 port, two USB 2.0 ports, an HDMI port, a Headphone/Microphone jack, an Ethernet port, an SD card reader and an optical drive. The system has 500GB of local storage on a 5400rpm hard drive and a webcam in the top bezel. For connectivity, the laptop comes with 802.11b/g/n Wi-Fi, sadly, Bluetooth isn’t supported here which is quite an understatement even for a budget system. The laptop comes with Windows 10 Home and a fair amount of preinstalled bloatware, but can be uninstalled in a few minutes.

As expected, to get to its budget price, HP had to do with some tradeoffs on the HP 15’s memory and storage; there is only 4GB DDR3L system memory (can be upgraded to 8GB) and a SATA-based 500GB (5400rpm) hard drive storage, which is on the mean side considering that 1TB hard drives are becoming standard in the budget category. To that, add a 2.0GHz AMD Quad-Core A6-7310 (turbo up to 2.4GHz) processor with integrated AMD Radeon R4 graphics.

The Quad-Core A6-7310 compares to, maybe, fifth-generation Intel Core i3 processor; which doesn’t add any muscle to the laptops except for basic everyday home/office computing and college assignments. The entry-level A6-series chip doesn’t translate into any gaming prowess, though, you’ll still be able to play a couple of older titles.

If you’re considering a chromebook in the same league, the Acer Chromebook 15 gives you the ability to work offline and run programs like Microsoft Word and Excel, tough ample local storage points are reserved as strong points for traditional laptops. The Chromebook 15 does have a superior 1080p IPS screen, faster 802.11ac connectivity and almost all-day battery life.

The three-cell battery yielded 4 hours 27 minutes, on our battery rundown test –acceptable for a 15-inch laptop.   While that doesn’t clear the 8-hour threshold for what we consider all-day battery life, it remains behind the Dell Inspiron 17 (5:20), Toshiba Chromebook 2 (5:32), and the Satellite C55DT (5:27). All these don’t come close to the Aspire One Cloudbook’s impressive 13:59, however.

The HP 15-ba009dx is very attractive for basic users on a budget, to be sure. It isn’t the cheaper as you have less expensive options, especially chromebooks, and there is certainly no lack of more expensive ones. But if you’re looking for as bargain deal, the system generally delivers on what it promises and gets the job done, provided you won’t throw complex tasks its way. Although it comes in for slightly more, the ASUS F556UA-AB32 remains our Editors’ Choice thanks to higher-quality screen and superior performance. 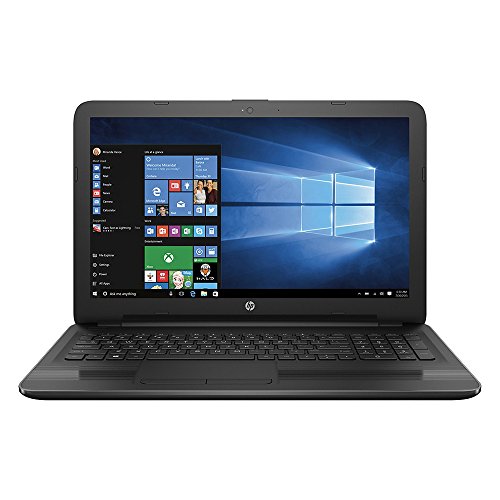