The HP 15-F222WM is your everyday standard laptop that fits the bill for bargain hunters. It may not stand out from the rest in the budget category, but it does what it needs to do at a reasonably good price.

The HP 15-F222WM probably isn’t what you have in mind when you think of a “dream computer,” but if affordability tops your list –more than anything else, then it will get the job done for far much less.  The large 15.6-inch touch screen and respectable battery life help this system score for everyday tasks or casual multimedia consumption.

Performance-wise, the HP 15 isn’t the most practical budget desktop-replacement you can have, especially if you like to tinker with more than eight or nine tabs, and the touch panel isn’t the most responsive. If you’re a basic user and on a budget, the HP 15-F222WM is a decent laptop, but the ASUS F556UA-AB32  remains our Editors’ Choice thanks to superior performance and reasonable pricing.

For a bargain hunters, we’re certain that a fancy design isn’t among the things you’re looking out for, and the 15-F222WN doesn’t sport a fancy design, rather, it adopts s utilitarian style. The top of the chassis, lid, bottom and hinges are clad in textured black plastic, safe for a silvery ‘HP’ logo on the lid. It measures 0.89 by 15.18 by 10.16 inches (HWD) and weighs 4.7 pounds.

What the low resolution means is that, with a closer look, you’re able to pick out the individual pixels, but that really doesn’t lock you out of a YouTube video or reading your mails.  Also on the screen is a glossy, reflective coating, which might compromise your work outside or under bright lighting, thereby, forcing you to fiddle around for a good viewing angle to avoid the excessive glare.

Port selection is pretty standard for a budget laptop. It comes with two USB 3.0 ports, one USB 2.0 port, an HDMI port, a Headphone/Microphone jack, an Ethernet port, an SD card reader and an optical drive. The system has 500GB of local storage on a 5400rpm hard drive and a webcam in the top bezel.

For connectivity, the laptop comes with Bluetooth 4.0 and 802.11b/g/n Wi-Fi, which can’t access 5GHz networks but isn’t out of the ordinary for a budget system. The laptop comes with Windows 10 Home and a fair amount of preinstalled bloatware, but can be uninstalled in a few minutes.

The 15-F222WM is armed with a 2.16GHz Intel Pentium Quad Core N3540 processor (up to 2.66GHz in Turbo mode), 4GB system memory and integrated Intel HD graphics. This combination isn’t uncommon among budget laptops, but most are average performers, and the HP 15’s performance is neither at the top nor bottom of its class. The laptop is perfectly capable of executing everyday tasks, though it might begin to feel a bit wobbly as when you have about seven tabs open, and in testing, it sometimes took a while to load pages with heavy images (though it never became a major nuisance).

If you’re considering a Chromebook in the same league, the Acer Chromebook 15 gives you the ability to work offline and run programs like Microsoft Word and Excel, tough ample local storage points are reserved as strong points for traditional laptops. That being said, the Chromebook 15 does have a superior 1080p IPS screen, faster 802.11ac connectivity and almost all-day battery life.

The three cell battery yielded 5 hours 17 minutes, on our battery rundown test –respectable for a 15-inch laptop.   While that doesn’t clear the 8-hour threshold for what we consider all-day battery life, it is enough to outlast the Dell Inspiron 17 (5:20), Toshiba Chromebook 2 (5:32), and the Satellite C55DT (5:27). It doesn’t come close to the Aspire One Cloudbook’s impressive 13:59, however.

The HP 15-F222WM is, overall, a somewhat nondescript budget laptop. There are few less expensive ones, like the Acer Chromebook 15, and there is certainly no lack of more expensive ones. But for bargain hunters, this system generally delivers what it promises on paper, making it a favorite among shoppers looking to buy an everyday laptop on a limited budget.

It remains a basic laptop, the reasonable pricing, touchscreen and design notwithstanding. At some point you might have to go for a more practical laptop witch the same budget, and for such our Editors Choice the ASUS F556UA-AB32 is also worth a look due to its higher-quality screen and superior performance. 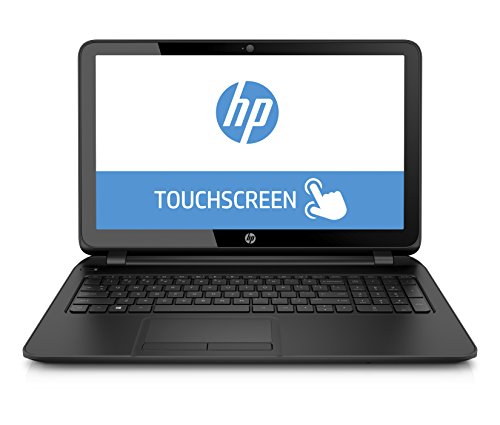