A lot of computer for less, that’s the HP 24-g020, and it checks all boxes for must-have features we always want from an all-in-one desktop, including a capable quad-core processor, 8GB system memory, a 1080p HD touch screen, and useful connectivity.

The HP 24-g020 is an affordable all-in-one desktop PC, with a 23.8-inch HD (1,920-by-1,080-resolution) touch screen, a quad-core A8-7410 processor and useful connectivity options, including HDMI-out and 802.11b/g/n Wi-Fi. This entry level Windows system isn’t the most powerful around, but it is packed with features that give it a longer shelf life than most bargain PCs around.

If you can spend a little more, the Acer Aspire AZ3-715-ACKi5 has a better design and offers superior performance, but the 24-g020 is a good alternative is you’re after saving a few bucks.

On the HP 24-g020 you have a textured white plastic body, which is the same aesthetic on the HP 20-c010 from last year. Being an all-in-one PC, all components are housed within the 16.6-by-7.7-by-22.9-inch (HWD) casing; the computer weighs 14.21 pounds altogether. The panel rests on a four-legged stand, it doesn’t wobble even a bit. On the top panel there’s a webcam and microphone, while the lower bezel houses the speakers.

The 23.8-inch touch screen has a 1,920-by-1,080-resolution, with an antiglare coating which isn’t very bad considering the price. When reading a document, large letters are legible, though you occasionally see pixelation on high-res images. For general browsing, casual YouTube viewing and email reading, the screen is very satisfying.

As expected, videos may appear fuzzy around the edges, especially high resolution ones, but not badly off to a point of being unwatchable. The speakers deliver high quality audio, rather surprising for a budget system. Even at full volume, the bass is clear and isn’t much distorted.

Connectivity isn’t the best, but the system has all the necessary ports you might need. In the right side of the system, there’s an optical drive and a three-in-one card reader on the bottom, right next to the Power button. The rest of the ports are located on the rear of the screen, including, a pair of USB 2.0 and two USB 3.0 ports, an Ethernet port, DC power in, HDMI port, and a headphone/microphone jack.

I still don’t understand why the headphone/microphone is in the back, and it’s also unfortunate that two of the USB ports are taken up by the wired keyboard and mouse, which are not special in any way. Wireless connectivity comes by way of 802.11b/g/n Wi-Fi and Bluetooth 4.0. Storage comes in a 1TB 7,200rpm hard drive, which should be enough for the average user.

The HP 24-g020 is equipped with a quad-core AMD A8-7410 (2.2GHz) processor, 8GB RAM and integrated AMD Radeon R5 graphics, a not so powerful setup, but good enough. That’s more than adequate for day-to-day computing, borne out of the AMD A8 chip, which sits between Intel’s 7th Gen Core i3 and core ik5 processors.  The system’s performance compares well against desktops with Intel Core i5 including the HP 24-e030 and the Acer Aspire AZ3-715-ACKi5. This configuration will let you keep over 10 browser tabs open, while at the same streaming a full-stream YouTube video with little to no lag.

As with most entry-level AIO systems, gaming performance isn’t optimized, due to lack of a strong graphics processor. Thus, 3D gaming here comes out as a slideshow, and can’t be boosted in any way. You’ll be all right if you stick to everyday and video tasks, and avoid any temptation to run 3D games.

A lot of computer for less, that’s the HP 24-g020, and it checks all boxes for must-have features we always want from an all-in-one desktop, including a capable quad-core processor, 8GB system memory, a 1080p HD touch screen, and useful connectivity. It has a higher resolution than its predecessor, more memory, double the storage space, better performance but the same design. If you want to spend less on a competent AIO PC, you should seriously start here. 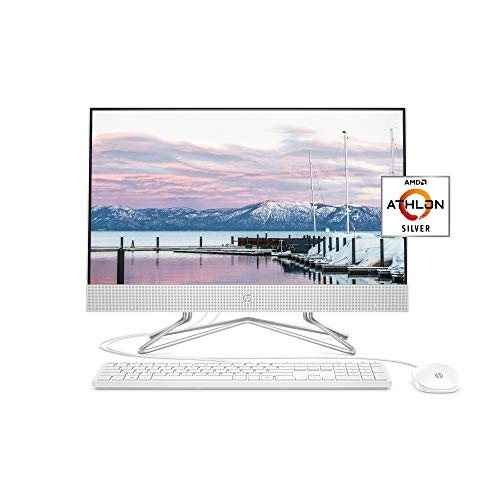