The HP 24-Xa0032 is a decent all-in-one desktop thanks to its large FHD touch display, robust built-in O&B audio, and potent components that are capable of powering you through work and entertainment.

All-In-One computers aren’t that exciting, not when we’ve got sleek, ultraportable laptops lining the spotlight everyday. But the HP 24-Xa0032 might make you rethink what you can do with a wide table-top PC. This multimedia powerhouse features a 24-inch FHD touchscreen, powerful Bang & Olufsen speakers, and fast SSD storage.

While it’s not as inventive as Microsoft’s Surface Studio or as classy as Apple’s iMac Pro, the 24-Xa0032 shows there’s still plenty of room for all-in-one PCs to go mainstream without getting obscenely expensive.

The HP 24-Xa0032 is a nice-looking All-in-One desktop. As you unpack it, it strikes you just how big it is, even though the 24-inch display should do more to clue you. Even with a relatively small base and stand, the wide screen will be a noticeable part of your desktop/room’s décor. The display bezels are fairly visible, but they are neither thick nor particularly thin.

Except for the base and stand that are covered in silver, the rest of the body isn’t too remarkable visually, though the prominent sound bar below the display is covered in black fabric. The sound audio hub makes the PC feel a little more at home in a living room or office than a workplace – but it’s too big to sit in a kitchen like some smaller AIOs such as the Acer Aspire Z24, and too powerful for use a basic web browsing kiosk.

One thing you might not notice at first is a webcam. That’s because HP tucked it away in a drop-down compartment right above the monitor. That’s quite great for privacy, and it helps streamline the loop of the HP AIO.

The display being the main attraction here, let’s dive into the details. It measures 23.8 diagonally and boasts a decent 1080p (1920-by-1080) resolution. That doesn’t sound much when you compare it with the likes of Microsoft’s Surface Studio 2 that apart from being classy, packs a 28-inch (4500-by-3000) PixelSense display and a dedicated graphics card. If that sounds like something your pocked can accommodate, it’s the best AIO to get right now, especially for professional artist and graphic designers.

Otherwise, if you’re shopping on a tight budget, the HP 24-Xa0032 will get the job done for almost a third of what you’ll spend on the Surface Studio 2, but you’ll have to do with less processing power, sacrifice the graphics card and the overall premium look and feel. Sometimes that’s what you just need – a not-so-expensive machine that gets the job done.

As expected for a large AIO desktop, connectivity options are excellent. It doesn’t have an optical drive, but you get all the ports you’ll ever need on a daily basis. Around the back, you’ve got two USB-C connections, 3 USB 3.1 Type A ports (one supports fast charging) 1 HDMI-in, 1 HDMI-out, a 3-in-1 card reader and a headphone/microphone combo.

Wireless connectivity comes via 802.11ac and Bluetooth 4.2 combo. Also bundled into the package are HP-branded, wired mouse and keyboard. We expected a wireless option here, since we have less costly AIOs offered with wireless keyboards and mice.

With a decent design and good touch display, the HP 24-Xa0032 is a straightforward AIO of choice for home entertainment, but HP was interested in adding more to the “all-in-one” to make it more powerful. These systems have usually not had the most powerful components compared to tower desktops, but that may not be the case here. In a surprising twist of events, there’s a genuine desktop CPU here, rather than a mobile chip that is often adopted due to thermal constrains.

Under the hood, it packs a 9th Gen Intel Core i5-9400T processor paired with 12GB RAM and 512GB solid state drive (SSD) storage, alongside Intel UHD graphics 630. And like I mentioned before, HP specced this thing up into a truly beefy general-use machine, one that’ll be good for both entertainment and medium-duty content creation.

As for the graphics card, it doesn’t suffice for heavy duty gaming, of which you can try the Microsoft Surface Studio that maxxes out with a dedicated graphics card.

So, who needs the 24-Xa0032 All-in-One? I see it being useful for any media professional who needs am home-office machine without much clutter and one that doesn’t cost so much. It won’t have any trouble with your usual workflow, juggling dozens of browser tabs, Spotify, Netflix, Slack and most photo editing apps.

As always, a desktop setup gives you more flexibility, but it goes without saying, not everyone wants to crowd their workspace with cables and humming PC towers. Once more, the HP 24-Xa0032 can also work as a secondary monitor, so you can plug in a gaming console on the side.

While the HP 24-Xa0032 All-in-One’s appeal may be limited, HP deserves some credit for delivering an all-in-one PC that’s actually lust-worthy. It gets a gorgeous TV-sized touchscreen, and some of the best speakers we’ve heard om a desktop. And, it doesn’t skimp on power either. On the whole, it delivers just about everything you’d want in a table-top PC.

However, there’s something to be said for having almost everything you need rolled into one, and HP manages to execute it well without charging over the top. But not everyone needs the features of this configuration, especially the touch display and B&O speakers.

If that describes you and need to save several hundreds of dollars but willing to sacrifice the touchscreen and great audio, then our Editors’ Choice for budget AIO PC, the Acer Aspire Z24-890-UA91 is a perfect shoo-in.

It costs much less, doesn’t have touch capability but features the same 24-inch IPS display, 9th Gen Intel Core i5-9400T chip, 12GB RAM and 512GB SSD as the HP 24-Xa0032 we’re reviewing. And, it looks premium and more beautiful on your office desk, something HP didn’t attempt to perfect. 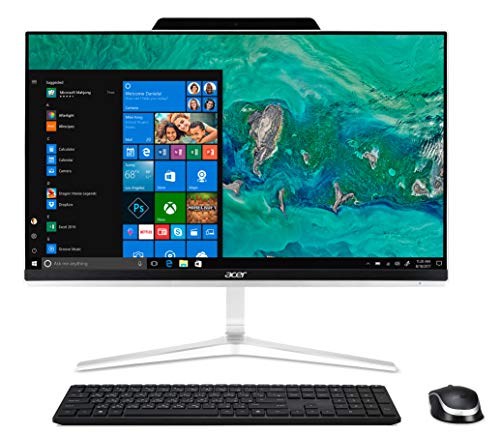