The HP All in One 27-CB0052 is one of the best all-in-one PCs you can buy, sporting a fantastic design, outstanding features, and great performance at a very reasonable price. It runs an AMD Ryzen 7 CPU and mobile GPU, so it’s not as powerful as a full tower PC, but for the price, we’d take it over an Apple iMac any day.

The HP 27-CB0052 27-inch All-in-One is a perfect choice for those who want a powerful all-in-one PC they can quickly set up and start using. Its full HD IPS display, powerful AMD Ryzen 7 5700U CPU and AMD Radeon graphics make it suitable for work, entertainment and creative tasks. Though a bit lacking in connectivity (no USB-C port), this AIO has all the functionality you could want for a do-it-all PC.

In this HP All-in-One Review, I’ll go over the features and what it’s like to use this all-in-one for everyday computing tasks and how it fares as a work PC. As things stand, this is an AIO I’d recommend to most folks, especially those who envy iMacs but can’t crack the hefty asking prices. I’d even argue that the HP 27-CB0052 is a potential Apple iMac replacement for buyers on a tight budget. That’s why it’s earned a spot on our best all-in-one computers. Read on to find out why.

All that said, from the spectacular design to the crispness of its display; the latest features, versatility, and functionality; its relative affordability; and more importantly its performance, the newest HP 27-CB0052 is phenomenal in nearly every aspect that matters.

Somehow, we’ll even say the HP All in One is better than the spendy iMac, especially for creatives who aren’t roped into Apple’s niche ecosystem. If you’re looking for an all-in-one and aren’t just looking for a budget, general-use PC, this is one that you should have at the top of your list.

The HP 27-CB0052 uses the same starry white color scheme as its predecessor, as well as the grille pattern for the speaker bar below the display, but the stands are a little different. Thankfully, the 27-CB0052 offers even slimmer bezels around the screen than its sibling. Other AIOs in this price range sport thick bezels that deliver the opposite of a sleek, forward-looking appearance.

Thanks to the thin bezels on the top and sides, the HP 27-CB0052 offers a wider screen real estate for multitasking. It measures 24.12 inches wide by 18.73 inches high and weighs only 14.53 pounds. For a 27-inch system, this HP All in One doesn’t take up much space on your desk but expect it to be fairly larger than most 24-inch AIOs out there.

HP sets itself apart from the rectangular bases we often see in All-in-One PCs and monitors by opting for a wire-frame stand that touches down in three points – two arches on the front and a larger flat at the back – for even better support. The base is sturdy enough, only that it doesn’t provide a place to stow away the included keyboard away when not in use.

Bundled into the package is a pair of wireless peripherals – a mouse and keyboard, which are useful additions, meaning you’ll get working out of the box. We see most basic all-in-one PCs come with wired keyboards and mice, but HP seems to have taken a cue from competitors on what to include in its midrange AIO line.

At the core of the HP 27-CB0052 is a 27-inch IPS display with a full HD (1,920-by-1,080-pixel) resolution. The display is fairly bright (rated at 300 nits at max brightness), but its off-axis viewing angles are tight. Still, it suffices for day-to-day use, including typing work reports, watching Netflix, YouTube, and every other streaming platform of your choice. As with all other IPS panels, HD videos look crisp and reproduce fairly accurate colors, backed with decent contrast.

From a distance, you don’t notice any quirks on the display, but when seated really close, you begin to notice a few individual pixels. Again, it does have the screen-door effect which is ever-present when content is stretched across 24- or 27-inch panels, you never see that in smaller panels though. For anything above 27-inches, we often recommend 2k or 4K resolutions if you want the best picture, but 1080p suffices here, especially since you aren’t buying the HP 27-CB0052 for professional creative work.

For productivity tasks, this HP All in One is as capable as your regular work laptop with the latest processor from either Intel or AMD. Whether it is having 10+ open tabs, taking part in conference calls, watching videos, using word processors, or even light gaming, this AIO won’t break a sweat. The AMD Ryzen 7 5700U CPU powering this PC is the reason it performs so well, plus it gets a 256GB SSD for fast processing. If I hadn’t known this is a mobile chip, I could have easily mistaken it for a proper desktop CPU.

Elsewhere, with the integrated AMD Radeon graphics, this might not be your ideal gaming PC, but for basic creative tasks you have a serious alternative to the iMac, but if you can afford the premium for the 27-inch Apple iMac, it’s the all-in-one you should be looking at.

The system’s stereo speakers produce powerful sound that’s much better than a laptop’s audio output. They easily fill a small room and you will find it necessary to keep the volume under 50 percent when seated in front of the system. It also comes with a pop-up PC camera with dual microphones that you can use for video conferences and remote work, alongside the mentioned dual front-facing speakers.

All-in-ones have always been perceived as being less powerful than traditional desktop PCs because they have to squeeze all of their components into the display. While HP 27-CB0052 All in One isn’t as powerful as a desktop or even other all-in-ones like the iMac 27-inch, it’s not a system you should dismiss.

With the 27-CB0052, HP created a computer that’s capable of handling all of your everyday work tasks. Kt won’t buckle when you have a ton of open windows or when editing multiple photos. Gaming leaves a lot to be desired, but in all fairness, that’s not what this machine is for. I like how easy it is to set up and how fast you’ll be able to jump into your work. The included keyboard, mouse, and webcam are appreciated, even if they’re serviceable at best. 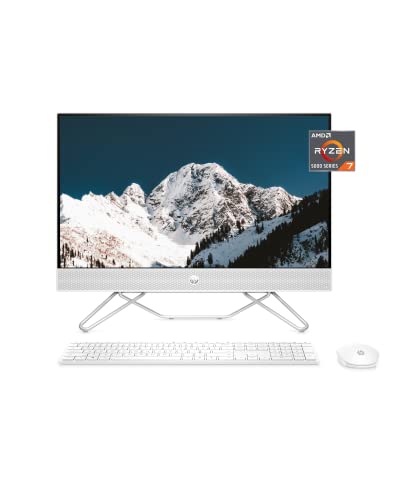 YES. Due to its affordable asking price, ease of use, beautiful design, and decent performance, the HP All in One 27-CB0052 is an all-in-one worth considering if you need a reliable compact PC for work and entertainment.