The HP All-in-One 24-DD0210 is an entry-level all-in-one that makes lots of sense if you’re looking to max out the amount of screen real estate for productivity. However, the mobile CPU and lack of USB-C make it hard to recommend at this price point.

The HP All-in-One 24-DD0210 is an entry-level all-in-one (AIO) PC that at first glance looks pricier than it is. The fancy base adds style to the system’s sexy appearance, and lends solid support to the 23.8-inch display, which is more generous than the 21.5-inch panels commonly found in economy AIOs.

However, apart from the Windows 11 Home pre-installed on this system, nothing has changed over the ‎HP 24-dd0010 from last year. Well, now you’ll spend almost $200 more to get Windows 11 pre-installed, since everything else – CPU, RAM and storage – in the new HP AIO remains unchanged from its predecessors.

Since nothing has changed in terms of hardware, we feel like the price hike isn’t justified at all. If it were my money, I’d go with last year’s model, the 24-dd0010 with Windows 10 pre-installed, then upgrade to Windows 11 (just a few hours and very simple), and while at it, save the extra cash. However, if you like your machine with the latest operating system or don’t have time to tinker with upgrades, then the newer HP 24-DD0210 is an excellent choice.

As mentioned, the HP 24-DD0210 takes on its predecessor on pretty everything, sporting the same cloud-white profile with a diamond-shaped pattern across the spear bar below the display. Instead of a rectangular base that’s common among AIOs, it uses a wire-frame stand that touches down in four corners, covering a rectangle that’s 14.2 inches by 8 inches deep.

The display on the HP AIO is a 23-inch Full HD (1920 by 1080) resolution panel. It isn’t the brightest around – rated at only 250nits brightness and it has narrow viewing angles. Still, it’s a good match for productivity, watching movies and Netflix binge, thanks to fairly accurate colors and decent contrast.

All ports are located at the rear of the screen, where you have two USB 3.0, two USB 2.0, one HDMI, microphone/headphone combo and an Ethernet port. HP didn’t include even a single USB-C port, a painful omission, meaning you’ll need an adapter to connect any of your Type-C compliant gadgets.

On the top-bezel, there’s a pop-up webcam, that you can use for zoom meetings, but it won’t be the best for capturing videos as it comes with a low-quality resolution.

Like its predecessor, the HP 24-DD0210 packs an AMD Athlon Silver 3050U processor, 8GB RAM, 256GB SSD storage and AMD Radeon graphics. The Athlon Silver 3050U is a low-end mobile CPU with our cores and a base frequency of 2.3GHz. This chip doesn’t support multi-threading, so you can’t really run resource-intensive apps here, but you’ll be fine with basic tasks like browsing the web, processing MS Office suite documents and watching movies.

Compared, the Lenovo IdeaCentre AIO 3, with almost the same price packs better components overall including: AMD Ryzen 5 5500U processor, 16GB RAM, 512GB and integrated graphics that translate to better overall performance compared to the HP 24-DD0210. It also comes with Windows 11 Home pre-installed, so you’re not losing on any latest feature here. Below is a basic feature comparison of competing AIO PCs.

The HP All-in-One 24-DD0210 is an entry-level all-in-one that makes lots of sense if you’re looking to max out the amount of screen real estate for productivity. It serves up a larger display than you might otherwise find for the price, but a full HD stretched across a smaller 21.5-inch screen might look better. And the mobile CPU and lack of USB-C especially at this price, make it the HP 24-DD0210 hard to recommend unless you find it deeply discounted during a clearance sale.

You’re better off spending the same amount on the Lenovo IdeaCentre AIO 3, our favorite Windows all-in-one, if you can. Or, if you are looking for an all-in-one to add as a secondary computer in your home, the HP Chromebase All-in-One 22 is a great choice if you are open to embracing Chrome OS. 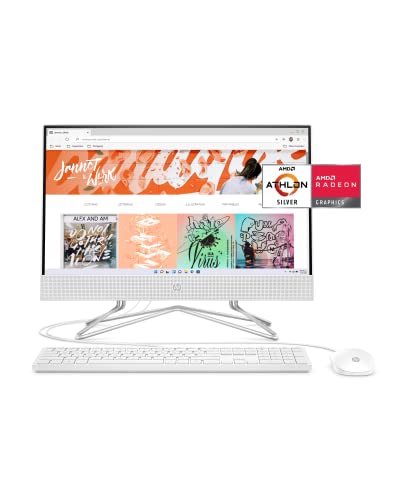