Our review laptop, the Chromebook 14-db0003na is great value for those looking for a basic web browsing machine that doesn’t cost so much but gets the job done.

Don’t have a lot of cash to buy one of the most expensive Windows laptops around? You might not need anything super powerful – you’ll mostly be accessing the web, creating work documents from home, and watching some YouTube and Netflix. If that’s you, the HP Chromebook 14-db0003na should serve you well.

Not only is it a very inexpensive home-office laptop, but it’s also quite unique. And that give it enough of an advantage to be worth investing your very limited budget.

On looks, the HP 14-db0003na isn’t exactly a high-end PC, but it gets a slick design that makes it a streamlined piece of kit nonetheless. Its tapered enclosure is 0.7 inches thick at its thickets point. At 3.74 pounds, its light enough to lag around on daily commute, though not as much as the 13.3-inch, 2.97-pound Toshiba Chromebook 2. For the extra weight, however, you get a slightly larger screen, and the black Chromebook 14 feels light in hand.

The HP Chromebook gets a stellar keyboard and trackpad. The keyboard feels responsive with clicky keys that offers plenty of travel. It does flex ever so slightly when you pound on it, but under normal use, it isn’t disappointing at all. My only gripe is the lack of dedicated Caps Lock key; in its place, you have a Search key and must be triggered while holding the alt key.

Not a big deal, though, but it makes it a bit difficult to impulsively reply to a tweet in caps. The touchpad is equally excellent. Here, you have a big and spacious trackpad, with plenty of room to mouse around. The entire trackpad is a button, so you really don’t have to move your fingers around to find the left-and-right-click buttons.

With a 1,366 X 768-resolution display and dual-core AMD A4-9120 CPU processor inside, this Chromebook 14 is the mid-tier model that HP offers for budget buyers looking to get productive at home, office or even college students. It isn’t particularly a technical powerhouse by modern standards, partly due to Chrome OS’s minimal bloat and speedy performance, but that doesn’t matter. Almost.

If we were to compare the Chromebook 14-db0003na, based on the specs, it would be an equivalent of the Intel Celeron-powered HP Chromebook 14  or the Acer Chromebook 14, only that both competitors boast Intel Celeron processors and have better 1080p resolution displays. The HP also includes 4GB RAM and 32GB of onboard storage, which is better than the 16GB storage on most Chromebooks,

Since Chrome is designed with cloud storage, the thin local storage on the HP Chromebook 14 isn’t as big an issue as it would otherwise be.

Our review unit, the HP Chromebook 14-db0003na is more than fast for day-to-day tasks, provided that you keep your multitasking appetite at the very minimal. You’ll notice occasional stutter under heavy use, videos would drop frames, or scrolling would stutter a bit. However, with more casual web browsing and other basic use, such stuttering gets rare, so you shouldn’t run into problems too often.

A Chromebook like the HP Chromebook 14 isn’t going to be as flexible as a full-Windows PC or a Mac. It doesn’t matter the whistles Google throws in, you’re still relying heavily on web apps to get things done, and ultimately the restrictions aren’t for everyone.

Still, for the asking price, the Chromebook 14-db0003na is great value for those looking for a basic web browsing machine. It’s more affordable that most competitors, while offering a great design and longer battery life.

The Lenovo Chromebook 14 serves up some much stiffer competition with newer components, an aluminum chassis, and a full HD (1080p) screen; but the HP Chromebook 14-db0003na is a bit more compact and better looking to boot if you’re looking for a Chromebook with good aesthetics. 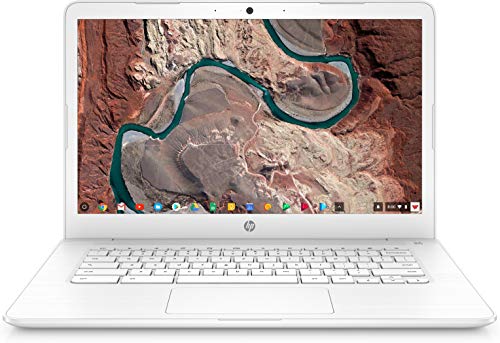