The HP Chromebook 14a-ca0022nr delivers on the 2-in-1 Chrome OS experience, boosting it with a sleek design. But it would go a little in performance, especially when its price starts to edge into the territory of better machines.

The HP Chromebook 14a-ca0022nr is a first-class Chromebook that cleverly straddles the gap between today’s hordes of plain, mainstream Chromebooks under $500 and price, business-oriented ones from Lenovo and others. An under $400 spend for the HP 14a-ca0022nr model gains you a 14-inch convertible with a handsome construction, 4GB of memory and excellent all-day battery life.

The Lenovo’s value keeps the HP from an award nod, but the latter is a winner nevertheless.

The HP Chromebook 14a-ca0022nr is a sleek, mineral silver slab with a circular HP logo in Chrome decorating its lid, that closes without a fuss. It’s easy to slip into a backpack at 0.7 by 12.8 by 8.6 inches, though it’s a little heavy to hold in your hands instead of your lap in tablet mode – at 3.3 pounds, the HP ha s full pound over the 14-inch Asus Chromebook Flip C436.

The hinges that let the HD (1366 x 768) screen flip and flip through the usual convertible modes hold firmly, with little give when you prop the display in laptop mode. There a visible gap, though, between the screen and the base when the unit is folded back into tablet mode.

On the left and right edges of the 14a-ca0022nr, there’s a USB Type-C port ideal for plugging in the AC adapter as well as an SD card reader. The right also holds USB Type-A port and a volume rocker, while the opposite side holds a headphone/microphone combo and a power button.

The non-backlit adopts the typical Chromebook layout, with a search/menu key in place of Caps Lock and browser, brightness, and volume controls along the top row. As standard with Chromebooks, the cursor-arrow keys are arranged in the proper inverted T instead of pedestrian clumsy row.

Well, the typing is satisfying, with responsive tactile feedback. The large buttonless touchpads responds swiftly to one- and two-finger taps; with the latter being an equivalent of a right-click.

It’s not always that I see a screen rated at 220 nits of brightness without wishing for 300 nits or, better yet, 400, but the HP’s display is absolutely fine, with true white instead of grayish backgrounds and good contrast. IPS technology adds to wide viewing angles, with reasonably rich and well-saturated colors. However, the HP Chromebook x360 14a’s 1366 x 768 is on the lower end, as competing Chromebooks at this price point rock Full HD resolutions.

Good Performance, Would be Better

Subjectively, the HP Chromebook 14a-ca0022nr is a fine performer, not hesitating when you load a couple of browser tabs and enjoy YouTube videos. With an Intel Pentium Silver N5000 processor, 4GB RAM and 64 eMMC storage, though, you don’t expect the same level of performance you get in Core i3-powered machine, like the Acer Aspire 5 A515-46-R14K.

If we remain with Chromebooks, the Lenovo Flex 5 and the Asus Chromebook Flip C434, ring the same price range but are packed with better Intel Core i3 and Core M CPUs, respectively.

That said, the internals only continue to keep the Chromebook x360 14a in budget territory, although what you’re paying for the machine borders high-end, as the N5000 processor, HD screen and 4GB RAM can struggle to keep up with modest web browsing. A couple of light tabs open is doable on this Chromebook, but with multiple video calls, you might easily crash.

On the plus side, during calls, the HD webcam offers impressively wide viewing angles. Some games will work smoothly as well, including Super Mario Run, but you might encounter slow down and glitches occasionally.

Decent battery life is something we all look for in laptops – come on – who want to be tethered to an outlet all day? Sure, the HP 14a-ca0022nr exceeds the category average (10:11), with an impressive run time of 11 hours 37 minutes, involving continuous web surfing over Wi-Fi at 150 nits of brightness. Excellent enough.

All told, the HP Chromebook x360 is a well put together package on the outside that just leaves a bitter taste on the inside. For the price, it’s starting to edge into the territory of better machines.

A small bump in your budget can land you a Windows 10 laptops such as the Acer Aspire 5 A515-46-R14K – with AMD Ryzen 3, 128GB SSD, a Full HD screen and a backlit keyboard. On the other hand, if a 2-in-1 convertible is a must, and you don’t mind Chrome OS, the same budget can get you the Lenovo Chromebook Flex 5, with a 10th Gen Intel Core i3 CPU, a Full HD resolution screen and weighs much less than the Chromebook x360 14a.

But if all you’re buying for is basic productivity and much on battery life, sleek design and portability, then the HP Chromebook x360 14a (14a-ca0022nr) is a good Chrome OS convertible that offers substantial savings over a horde of corporate and deluxe model. It’s well worth considering. 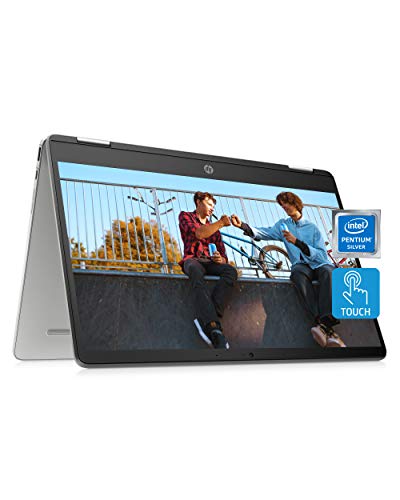