The HP ENVY 5055 is a near-perfect wireless All-In-One printer with great performance and strong feature set for the home user. It also boasts terrific connectivity with dual-band Wi-Fi connectivity as well as support for third-party apps including Apple AirPrint , Mopria and HP’s ePrint.

The HP ENVY 5055 is a wireless All-In-One printer that’s not costly, but its specifications are those of a more expensive printer that can even be used in a small business. It’s an inkjet printer, meaning it prints hard copies by spraying jets and ink droplets of ink onto the paper, something that gets in the way of print speeds.

Even with slow print speeds, it manages to deliver quality prints that will leave most home users satisfied. Plus, it offers duplex printing which gives even more reason to buy this AIO printer for all your home printing needs.

With its black chassis and matte-black scanner lid, the two-tone HP Envy printer looks more like the bigger HP Envy 7855 minus the automatic document feeder (ATF) for sending multipage documents to the scanner. But then again, it’s not common to find an ADF on a consumer-grade photo printer like this. None of the competing Canon TS5320 or HP Envy 4520 have that feature, but its available on the HP OfficeJet 5255 Wireless All-in-One Printer.

In any case, think carefully whether you really need an ADF at home; feeding multiple pages to a scanner one page at a time can be tedious and time-consuming, but then having an ADF means spending more on a printer and increases the overall size of the printer. The HP ENVY 5055, for instance measures 5 by 17.5 by 14.4 inches (HWD) and weighs 11.93 pounds, compared with the HP ENVY Photo 7855’s 7.6 by 17.9 by 19.3 inches (HWD) and weighs 19.85 pound. The HP OfficeJet 3830 is significantly small in all directions and weighs about the same as our review unit.

The front-placed 2.2-inch monochrome touchscreen panel offers all the access you need to interact with this printer, and blends well with the printer’s design. All functions such as copying, scanning and settings among other are laid out clearly and the touchpad makes for easier navigation. Some users may find it tiny and less responsive than what they’re used to, but those are the few sacrifices you make to hit a lower price. 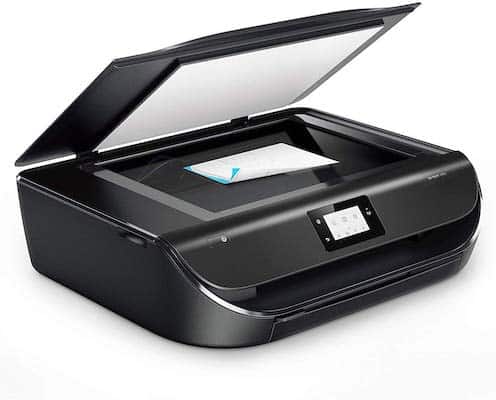 Connectivity features include dual-band Wi-Fi that connect directly to your PC via USB, and Wireless Direct, which is basically HP’s own equivalent of Wi-Fi direct, a peer-to-peer networking protocol you can use to connect your mobile devices to the printer without either it or them being connected to a proprietary router.

Other third-party connectivity apps include Apple AirPrint and Mopria, and HP adds its own ePrint utility for printing emails and attachments. However, this printer doesn’t support Ethernet connectivity or printing via USB.

This Envy 5055 All-In-One printer has a horizontal paper loading tray which draws paper using rubber rollers, that work fine and provide just enough force as to not bend the paper. The input tray can hold up to 100 pages, while the output tray can carry only 25. This means that you’ll need to readily remove the paper stack quite often as the 25-paper capacity is pretty low. 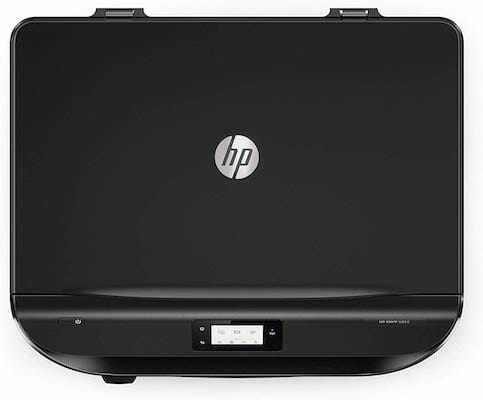 The HP ENVY 5055 setup is quite straight-forward, requiring about 5 minutes to be up and running. Additionally, you have a very simple and easy to follow guide in the box as well, as well as an included HP Envy 5055 driver pack for easy setup. It has a print resolution of 1200 x 1200 dpi for monocolored prints and 4800 x 1200 dpi for colored prints. It is the same resolution you’ll readily find on most budget home printers. With prints speeds of 10 pages and 7 pages per minute for monocolored and colored prints respectively, that’s not the best around but is still practical for a budget inkjet printer.

In addition to the printer, the Envy has a copier with a 600 x 300 copier resolution for both colored and black and white. For copying, it has speeds of about 8 pages per minute and 4 pages per minute, for monocolors and colored, respectively. Again, at its peak resolution of 1200 x 1200 dpi for black and white prints, this printer falls short of a perfect resolution for a budget printer. You can opt fo ink subscription as well, but this printer readily prints from social media pages with ease.

For most part, it will get the job done in printing out crisp text documents, though. However, for small fonts, it might deliver low quality prints with text that’s quite hard to even read, since the nozzles responsible for black ink distribution are not closely spread. Apparently, inkjet prints are not often accurate on the black and white front, but they are able to capture the colors sharply. And, for starters, the HP Envy 5055 driver is available for download, meaning you don’t miss on anything while setting up the printer.

Out of the box, the included HP Envy 5055 ink cartridge (the newer HP 65; two of those – one colored and one black), which is fine as most printer come without. As always, these standard sized cartridges do not have a lot of juice as you can only print around 100 pages on each. As such, the 65 XL cartridge might be a better choice overall for a higher duty cycle.

The Envy 5055 operates on the standard A4 sized papers, it supports other sizes as well, but you can only go as low as 3 x 5 inches, with additional borderless printing on all supported paper sizes.

The HP ENVY 5055 is a near-perfect wireless All-In-One printer with great performance and strong feature set for the home user. It also boasts terrific connectivity with dual-band Wi-Fi connectivity as well as support for third-party apps including Apple AirPrint , Mopria and HP’s ePrint. The small 100-sheet capacity and 25 paper tray is limiting if you print often, but that’s not a deal-breaker for a budget AIO printer. And the lack of an ADF, may put the Envy 5055 out of consideration for most users. But we like it for the 2.2-inch touch-capable LCD control panel, and the unit’s sleek looks.

Is there a better option?

Unless you need ADF, the inkjet performance is quite standard across the board. Nevertheless, the HP OfficeJet 5255 offers better print speeds and quality output, has an automatic document feeder and looks more practical for even a small office setup. If you’re buying for a home office, it might be the best choice around.

And, if large photo prints are your thing and can do without multi-function components like ADF and fax, consider upping the budget for a printer like the Canon Pixma IP8720, that offer wider print sizes as well.

Yes. For the price, you’re getting a near-perfect home-based office printer that can print scan and copy. The paper tray on the HP ENVY 5055 has less capacity than we would like, and it lacks USB printing, but they aren’t deal breakers – especially when you’re getting good performance and great output quality.