The HP Envy TE02-0042 is a slick machine that leverages the offers massive value across a wide range of points with a slick design, solid build, and powerful components including a 12th Gen Core i9 processor and an RTX 3070 GPU.

The HP Envy TE02-0042 is a top-tier machine targeted at professional creatives, and it’s got the specs to back that up. HP first announced it during CEC 2022, and we’re just impressed by what it has to offer niche content creators and other productivity users. Like all other Envy desktop PCs announced this year, the new Envy carries a slick new design with a matte silver finish around the body, reminiscent of the Mac Pro from past years. However, unlike previous Envy Desktops, it packs some beefy hardware under the hood.

Take for instance our review unit, the HP Envy TE02-0042, and what it has to offer. This mid-range machine packs up to an Intel Core i9-12900 processor, Nvidia GeForce RTX 3070 graphics card, 16GB RAM, and 1TB SSD storage. Normally, this is the kind of hardware you’d find in a gaming machine like the HP Omen 30L; albeit with variations in the choice of CPU used in those gaming desktop PCs.

As designed, this HP is definitely more at home in an office or campus library than at an eSports tournament. That said, it boasts a higher-end configuration that can get you some pretty powerful performance, both in gaming and productivity.

The abundance of ports on both the top and the back makes it an excellent workstation with lots of options for USB peripherals, a full-sized SD card slot, and even an easily accessible USB Type-C on the top panel.

The real showstopper is the chassis. It’s simply a gorgeous PC, as far as office systems go. It doesn’t get the razzle-dazzle of RGB lighting like other systems, but it’s definitely a more elegantly designed PC than the plain monolith looks of most Pavilion desktops.

The included keyboard and mouse are standard issue HP keyboard and mouse combo, and while they will get the job done, they are easily passable as such. There’s nothing wrong with swapping both of these for the best keyboard and mouse combos in the market to suit your tastes, and you’ll need to buy a monitor separately. If you don’t already own a great office/productivity monitor, something like the 32-inch Samsung M7 is a great choice.

If you’re looking for a performant PC for creative work, looking to replace an aging family computer, upgrade the home office machine, or simply outfit your business or organization’s workstations, or just need a powerful computer without turning your desktop into a carnival, then we can’t recommend the HP Envy TE02-0042 highly enough.

The design of the HP Envy TE02-0042 I one of its biggest charms. The compact, slick form factor – for a desktop – makes it easy to work into just about any workspace setup you have.

The several ports on the top panel – including a USB-C port and an SD card slot – make it very versatile regardless of the kind of work you’re using it for and a large number of rear-facing ports mean it can handle whatever you throw at it. Around the back, there are more ports including two USB Type-C, another USB Type-C with Thunderbolt 4, two USB 2.0, and audio in-out ports as well as a microphone jack. On the Nvidia RTX 3070 graphics card, there’s HDMI In/Out and three DisplayPort for multi-screen setups.

Moving away from function, the chassis is beautiful. The HP Envy TE02-0042’s silver chassis is a definite change from the characteristic black chassis on most HO computers. The HP Envy immediately reminded us of the Apple Mac Pro, in large part because of its design, making this model an excellent complement as a desktop counterpart.

Given the hardware in the Envy TE02-0042, it’s no surprise that this HP performs strongly in creative tasks and it can even play modern AAA titles with ease. This is thanks to the Nvidia RTX 3070 and Intel Core i9-12900 CPU along with 16GB RAM and 1TB SSD storage. As configured, this PC is a future-proofed productivity machine that looks good and feels good at work. Simply put, it’s a midrange workhorse, capable of running most creative tasks or other business tasks delivering a fantastic productivity experience.

That applies to professional creativity tasks where you need enough muscle to run applications like Photoshop, provided you get a good monitor to match the machine’s massive power output. The overall experience of using this system is a very positive one. Because compared with a typical midrange desktop computer, the Envy is designed to deliver more power and efficiency for productivity applications. Booting takes mere seconds, and launching applications is blindingly brisk.

When not playing, the RTX 3070 is a capable gaming card even if the machine’s design doesn’t bear the RGB that often signals gaming machines. It runs modern AAA titles at both 1080p and 1440p fluently, meaning you can play games such as Cyberpunk 2077 and GTA V at over 60 fps at high settings. That’s about the same level of gaming performance you get from machines like the CyberpowerPC GXiVR8080A28 and the MSI Aegis RS, both gaming machines featuring RTX 3070 and RTX 3070 Ti GPUs respectively.

With the RTX 3070 GPU, the HP Envy desktop is built to satisfy more than gamers. It comes with HP Palette, which is a digital workspace that includes a host of other productivity features – Duet for HP, which allows you to extend your desktop to an HP tablet, and QuickDrop which allows you to quickly share photos between your phone and HP device.

Apart from digital screen sharing, you can connect up to four monitors to the Envy Desktop, as well as extend your connectivity via the Thunderbolt 4 port. The new design also takes notes from the HP Omen range with a toolless case that allows you to upgrade memory, storage, or graphics down the line.

The latest HP Envy Desktop is an excellent PC crafted with professional creatives and home office/business users in mind. For a long time, HP has been delivering decent performance via its Pavilion line of business desktops, but mostly they’ve been only delivering entry-level processors and occasionally basic GPUs.

With the Envy TE02-0042, you’re not only getting a top-tier 12th generation Intel Core i9-12900 CPU but also dedicated RTX 3070 graphics that are handy for both work and play. The result is a massively powerful machine in an incredibly beautiful chassis that offers lots of upgradability options down the line. The only thing lacking here is RGB lighting, otherwise, this is a gaming machine with a productivity aesthetic.

If all you need is a stylish and powerful workstation for all your creative and gaming needs, the Envy TE02-0042 is one of the best models HP has put out so far and is easily its best-looking one at that. And for the price, it packs in a lot of value when you factor in the hardware that has gone into it. For all these reasons, the HP Envy TE02-0042 is our newest Editors’ Choice for midrange productivity desktops PCs. 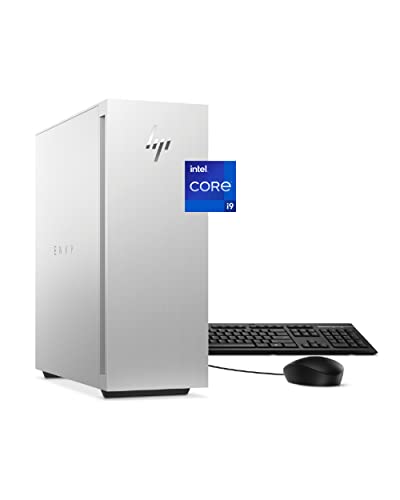