The latest HP Envy x360 15-eu1026nr is sleek, and compact and doubles up as a tablet thanks to its 360-degree hinge and touchscreen capabilities. It comes with AMD’s Ryzen 7 5825U that promises powerful performance, making it a great choice for students and business professionals alike.

If you can’t decide between a laptop and a tablet, the HP Envy x360 15-eu1026nr could be the best machine for you. Like the 13-inch model we reviewed earlier in the year, the 15-inch is a budget-friendly powerhouse thanks to the stunning AMD Ryzen 7 processor, GPU, and gorgeous all-around design that will sit well at the office or college.

Most people like 2-in-1 laptops because they offer the best of both worlds since the 360-degree hinge lets you effortlessly switch this laptop into a tablet with one easy motion. With the Envy x360, HP delivers a laptop that can do almost everything, including casual gaming, has good battery life, a slick design, a fantastic keyboard, and a respectable 15-inch touchscreen display.

That said, using the 15-inch HP Envy x360 in tablet mode isn’t the most natural feeling experience you can get with a 2-in-1. You can flip the screen on some laptops and feel like you’re holding an iPad running Windows 11, but the Envy x360 (2022) is not that kind of laptop. The laptop runs Windows 11 tablet mode just fine, but its weight and noticeable bulk, when used as a tablet, might give some people a pause.

The HP 15-eu1026nr truly shines in its performance, making most of its AMD Ryzen 7 5825U CPU deliver class-leading performance in the 2-in-1 category. Also, the Radeon GPU outperforms its rivals running Intel Iris Xe and in some cases by a wide margin where things get closer, the HP Envy x360 still comes on top, and while its battery life isn’t the best we’ve seen recently, it’s definitely up in the leaderboard.

So, the HP Envy x360 (2022) is already one of the best HP laptops we’ve seen this year, but when you factor in the price-to-performance ratio, it’s easily one of the best values for a 2-in-1 laptop going.

As the name says, the HP Envy x360 is a 15-inch 2-in-1 laptop, meaning the hinge allows it to be rotated all the way around to function like a tablet. Here are the specs on the 15-eu1026nr model:

Though the HP Spectre line is considered the company’s premium range of laptops, the Envy line this year is nearly as good. It costs much less, but it feels like a premium laptop and comes with all the processor options of top-of-the-line laptops.

The only thing you’re giving up with the Envy is some fit and finish, but given the savings, you’re making compared to similarly-equipped laptops like the Apple MacBook Pro, HP Spectre, and Dell XPS, it’s a great choice for anyone on a budget.

For 2022, the Apple MacBook Air with M2 chip has won all accolades with its awesome combination of efficiency and power, but AMD’s newest Ryzen 7 processors are nearly as good. The HP Envy x360 15-eu1026nr packs a solid feature set including an AMD Ryzen 7 5825U processor, 8GB RAM, and 512GB SSD, which is possibly all you would need to run most tasks without any issues.

The Envy starts up quickly and can resume from a sleep state to fully functional in just a few seconds. The Ryzen 7 5825U chip used here is snappy and allows the Envy to hold its own against some more expensive 2-in-1s running an Intel Core i7-1165G7, like the HP Spectre x360 15 and the Lenovo ThinkBook 14s Yoga, beating them both in several areas like multicore performance, in addition to costing much less.

You’ll also be surprised to see how well the HP 15-eu1026nr’s Radeon graphics handles both benchmarks and real-world use. No, you won’t have to run the best PC games on the HP Envy x360, natively, but you can get away with casual gaming at decent frame rates. And for creatives who are working on a really tight budget, it’s a good option.

The design is familiar but beautiful

HP Spectre laptops are the most beautiful pieces of kit you can buy, in my opinion. The Envy line can’t deliver such an aesthetic, but it borrows enough from its premium sibling, including premium materials, a thin profile, and neat details like the slanted HP logo, and Envy cutouts in the speakers.

To be honest, the design is extremely functional and all features are practical. The keyboard is a welcome reprieve from the “slim at all costs” designs you find in top-tier laptops like Dell’s XPS 2-in-1s and the Apple MacBooks. The keyboard has excellent travel, is paired with a massive trackpad, and even a Numpad, something you rarely find on 15-inch laptops lately.

Overall, the design is just awesome, and nothing has been sacrificed in such a budget-friendly machine. You even find a fingerprint reader built into the keyboard, something most laptops at this price point don’t offer.

The Envy x360 battery life is good, but not great

While most of us are stuck at home with plenty of power outlets, this is shaping up to be the year laptops finally turn the corner on battery life. This is much in line with what we’ve seen in other laptops powered by AMD’s new Ryzen processors, which hardly need any power to accomplish basic tasks like web browsing.

Though 13-inch laptops get a bit more, powering the larger 15-inch display isn’t a small task, lasting over eight hours and 45 minutes on a single charge is still great. However, gaming or anything more intensive will definitely cut that down, but for everyday tasks, it’ll get you through a workday.

We’ve seen some 15-inch laptops that manage to be very lightweight, but most of the time you’ll be choosing between the bigger screen or the lighter laptop. Well, the Envy x360 isn’t heavy by any means, it’s still 4.11 pounds, while the 13-inch HP Envy x360 is just a hair under 3 pounds total.

It’s right in line with other 15-inch touchscreen laptops. The Dell XPS Plus, for example, is 2.75 pounds, but 4.5 pounds if you opt for the Dell XPS 15 model with a touchscreen. The older 15-inch MacBook Pro also weighs around 4 pounds, but it only has a small touch bar instead of a full touchscreen. Still, using this laptop in tablet mode is a little hectic, unless you flex it into tent mode, which makes watching movies much more practical.

The touchpad is a little finicky, competition is much smoother

While the HP 15-eu1026nr offers a wider and smoother touchpad than older Windows laptops, it’s still a little rough to the touch. We’ve seen flagship laptops out there that tend to be smoother, with glass surfaces that let your finger glide a bit more.

Also, the click action on the touchpad feels a bit too chunky and tends to spring back weirdly. Well, it’s just a small thing that signals this isn’t quite a top-tier laptop and is nothing you won’t get used to.

Oh yes, especially if you’re looking for an affordable 15-inch 2-in-1 laptop that can do it all. The AMD Ryzen 7 at the heart of the HP Envy x360 puts some of the best scores for a 2-in-1 we’ve seen this year for under $1000. However, it’s not a machine for gamers but the Radeon graphics will still let you have some fun, it’s just not powerful enough to run the latest AAA games.

That said, if you need a machine that can work all day and take multitasking in its stride but can also turn into an entertainment device when you’re ready to relax, the HP Envy x360 15-eu1026nr is an excellent choice. This slick, compact machine has a great 1080p display and fantastic battery life and can pack a powerful punch when it comes to performance. 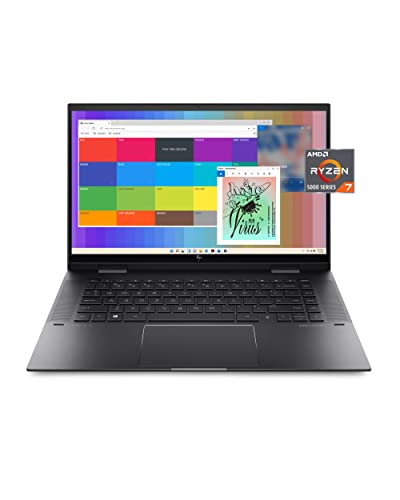