The HP OMEN 30L GT13-0093 runs games and productivity apps beautifully, thanks to a well-balanced orchestra of hardware and quiet cooling system. It’s expensive, for sure, but if you have the money to spend, its performance and feature set are worth the premium you’re paying.

The HP Omen Gaming Desktop is so far the most powerful rig for pro-gamers, and it has one significance over many of its competitors. It’s very quiet, power packs a punch. It turns on with a gentle purr and produces white resonating noise when you run demanding games or productivity apps. Compare that with the jet engine sounds of other gaming desktops, and the Omen GT13-0093 comes out blazing, even just as an everyday productivity machine.

Our review model of the Omen 30L, the GT13-0093 packs a rampaging Nvidia GeForce RTX 3080 graphics card for 4K pursuits in Cyberpunk 2077. It also has overclocking features thanks to an unlocked Intel Core i9-10900K CPU and tons of memory and storage.

Modern aesthetics, customizable RGB lighting, and brand components from Cooler Master, Western Digital, and HyperX make the Omen 30L a capable alternative to the Asus ROG Strix GA15DK. The Corsair Vengeance i7200 remains our Editor’s Choice for high-end mainstream gaming towers for its even subtle looks and quieter operation, but the Omen 30L is still a fine alternative.

The HP Omen 30L – like many other gaming machines with Nvidia GeForce RTX 30-Series GPUs – are not easily available in the market. And should you find one, they never come cheap.

Our review model, the GT13-0093, sits somewhere in the middle. This unit comes equipped with an Intel Core i9-10900K CPU, an Nvidia GeForce RTX 3080 GPU, 32GB RAM, 2TB SSD + 2TB HDD storage and a liquid cooling system. For all its worth, it is an incredibly powerful machine, and given the high demand for 3080 GPUs, it’s great value to grab before they rub out if stock again.

The HP Omen 30L is a refreshed replacement of the company’s Omen Obelisk lineup, sporting a redesigned case, new technology, and better components altogether. The HP 30L model we’re reviewing gets its name from the approximately 30-liter interior volume, with a chassis measuring 17.7 x 6.5 x 16.6 inches (HWD). The tempered glass front panel looks great and serves to set it apart from the smaller and less powerful HP Omen 25L.

HP throws in an additional tempered glass left panel fused with bright interior RGB lighting, giving the Omen 30L a sleek modern vibe. There are tiny triangle cutouts around the front panel, which, apart from giving the chassis a cool look, provide airflow to the 120mm Cooler Master RGB fan encased within. The top-mounted men logo is also backlit, and all lighting (interior and exterior) are individually customizable for color, brightness, and patterns via the Omen Command Center app.

As with all big-size towers, this case has ample working room, despite the skinny outlook. In fact, everything is destined for a custom look, but the interior wiring could be neater. Everything else looks the part of a gaming desktop, with the Intel Z490-based ATX motherboard featuring passive heatsinks for cooling. For additional cooling, there’s a 92mm fan at the rear, it fits perfectly given the Omen 30L’s slim profile.

Port selection is excellent, with minimal top selection ports that include: two USB 3.2 Gen 1 Type-A, an audio combo jack, and a separate microphone jack. The latter is meant for older headsets that have separate connectors. The front ports are recessed, and the downward slope acts as a guide for inserting peripheral connectors, while the recessed location ensures that the connectors don’t stick out so much.

Around the back, there are more ports including, six USB Type-A ports; a USB 3.2 Gen 2 Type-C ports; and microphone, line-in, and line-out jacks. On the GeForce RTX 3080 card, there is a single HDMI and three DisplayPort video outputs.

In our review configuration, HP pairs Intel’s top-end consumer-oriented Core i9-10900K processor, which is a step up from the Intel Core i9-10850K processor in the HP Omen 30L GT13-0093 that we reviewed recently; but both rock one of our current best picks for graphics card, Nvidia’s flagship RTX 3080 graphics card.

The Omen GT13-0093 faces its most direct challenge in the desktop battle with the ASUS ROG Strix G35CZ, which pairs a factory-overclocked Intel Core i9-10900KF and an RTX 3080 graphics card, effectively the same as the Omen, for the same price, but with less hard drive storage. But in most cases, the storage shouldn’t be a hindrance when it comes to gaming.

In Shadow of the Tomb Raider (highest settings), the high-end CPU and class-leading graphics card deliver impressive performance, with enough pixel-pushing power to match similarly configured systems. However, it fails to match Corsair and Alienware machines with higher-end RTX 3090s but is at par with RTX 3080 models.

On Grand Theft Auto V (very high settings), the same trend is replicated, seeing the Omen 30L and the Corsair Vengeance i7200 tie, but the Omen falls back a bit at 4K.

Overall, the Omen 30L’s numbers look compelling, with just a few frame rates separating it from the Corsair. The Falcon Northwest Talon (2020) with Ryzen 9 chips gets a little advantage at a UHD/4K resolution, considering that the GPU, not the CPU, is the defining factor.

By pairing a high-end CPU and GPU, along with 32GB of RAM, 1TB NVMe SSD, and 2 TB hard drive, the Omen 30L shines at productivity as well. In fact, it manages to beat the Corsair and Alienware systems slightly, with better transfer speeds and resilience in graphics-intensive projects.

The Omen 30L supports CPU overclocking when equipped with an Intel K-series multiplier-unlocked chip, such as the Intel Core i9-10900K in our review unit. The Omen Command Center app features an intelligent overclocking mode that automatically determines the highest stable overclock, with better speeds without necessarily increasing the core voltage.

While the Omen 30L doesn’t stand above the Alienware Aurora R11 or the Corsair Vengeance i7200, it’s still a less costly and respectable alternative that can’t just be shoved into the corner. For all its worth, it delivers consistent good quality inside and out, sports a smart look with customizable RGB lighting, offers overclocking features and future upgrade potential that make it a safe choice.

Perhaps, its biggest problem is the same one facing other high-end gaming towers and PC parts in late 2020 and early 2021: availability. The model we’ve reviewed is available in stock as I wrote this, and even if it will take a few weeks to ship, the HP OMEN 30L GT13-0093, if you choose the right configuration, is worth the wait and money. 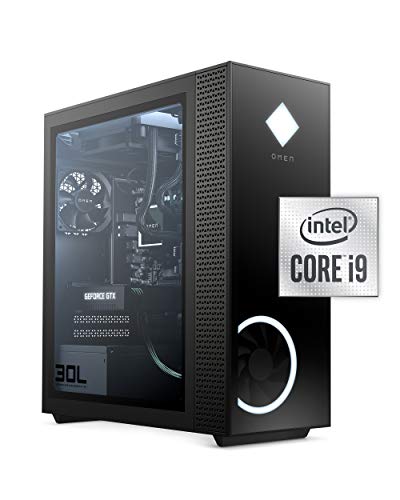