The HP Pavilion 15 (15-eg2025nr) is part of our favorite Pavilion line of laptops and this latest iteration carries a fair amount of power and a bright display in its beautiful slimline chassis. If you need a laptop for work, college, and home entertainment, this is the full package.

The Pavilion line has for years been HP’s consumer mid-range Swiss army knife, and the 15-eg2025nr fits right in; it’s not quite an ultraportable, but it truly has a lot going for it. The Pavilion 15 we’re reviewing is absolutely bursting with high-spec hardware, from the 12th generation ‘Alder Lake’ Core i7 processor, 16GB RAM to a speedy 512GB SSD and a 15.6-inch FHD display.

Like its predecessor that we reviewed last year, the HP Pavilion 15 (15-eg0021nr), the 2022 HP Pavilion is a strong contender for a spot on our best laptops list.

For the most part, it leverages those modern components, delivering performance, which while not quite reaching as high as the high mark set by the big-hitter in Intel’s 12th generation mobile processors, is truly impressive.

HP packs all of those guts into a beautiful and unapologetically attractive case, a slim-enough form that looks more premium than it is, and boasts more than enough ports to make the 15-eg2025nr fully useful no matter what you might want to use it for – office, business or school.

There’s a full-size keyboard that’s a thrill to type on, and a large trackpad that won’t let you down. For day-to-day productivity tasks, whether it’s casual photo editing, web browsing, or binging on Netflix or YouTube, this HP Pavilion 15 has what it takes, and it doesn’t too slow or hot when doing it.

But, of course, we’re looking at an under $1,000 laptop here, and for all its reputation, HP isn’t known for having the power to pull off miracles. In short, corners have been cut to deliver such impressive performance at such a low price, but they’ve been sensibly chosen and are more likely to be features you can live without.

The HP 15-eg2025nr doesn’t have keyboard backlight, for example, and the nice-looking case may be entirely plastic. Also, it doesn’t get any discrete graphics, so the HP Pavilion 15 is forced to rely on fairly-better-than-average Intel Iris Xe graphics which will give those looking to run modern AAA games a pause.

Still, even with its limits, we don’t see any reason not to opt for the HP Pavilion 15. It meets the price expectations perfectly, stacking up well against machines like the Acer Swift 3 and Asus ZenBook 14 perfectly.

The Ultrabook category can be a tough one to define. If you take the word to mean ‘any laptop that looks slim’ then the HP 15-eg2025nr absolutely slots in there. This Pavilion 15 looks incredibly fantastic for its price point, with HP trimming the chassis back a long way.

The screen, for instance, is fairly thin (but it’s made s little bulkier by the protective rim around the edges) and is a little stiff than we’d typically expect of a plastic-cased laptop. It’s well braced on the inside because it doesn’t have the subtle glass front that offers extra rigidity. The 15.6-inch FHD (1920 x 1080) IPS display is bright enough for daily use (250 nits) and offers a wide color gamut alongside integrated Iris Xe graphics.

On looks, the Pavilion 15 sports a minimalist gray chassis and an easy-to-open lid, which makes this laptop look pricier than it is. In fact, from afar, it passes for a more expensive professional notebook, but once you get closer the stylized Chrome HP logo on the lid is visible enough to give the game away. Still, the chassis is sleek and has a luxurious feel, edging it for the professional laptop it is.

Well, for the 2022 Pavilion 15 version, HP made a very compact laptop but it’s still not as thin and lightweight as competing ultrabooks in the market, including the Asus ExpertBook B9 or the Dell XPS 13 Plus, but it’s still more portable than most. Measuring 0.7 x 9.21 x 14.18 inches and weighing 3.86 pounds, the 15-eg2025nr is on the periphery of portability, but you can still carry it in a backpack to work or college effortlessly.

The HP Pavilion 15 has a decent, if not over-generous, amount of ports, with a USB Type-A port on each side of the machine, a multi-function Type-C connector on the left, a full-size HDMI out, and a built-in microSD reader.

The full-size keyboard sports a full-width ten-key layout which is natural to get used to, and features minimal flex and decent key travel. It is comfortable compared to most other keyboards in rival 15-inch laptops, but you may struggle in low light because there’s no backlighting on offer. Below it is a decent-sized multi-touch trackpad with impressive click to it, along with a fingerprint reader on the wrist rest.

HP packs quite a bit of unbridled power within the slim frame of the 15-eg2025nr. It uses a 12th-gen Intel Core i7-1255U chip, designed for ultrathin laptops. This mobile chip puts out less power than the Core i7-1260P available on premium notebooks, but it’s also energy efficient as it sucks up less battery life.

In everyday use, you’ll not notice any real difference in processing between the HP Pavilion 15 and the Dell XPS 13 Plus, for example, which uses the higher-end Core i7-1260P processor. Both are snappy and responsive, with 16GB RAM here ensuring that the device will never struggle amid loads of active browser tabs.

However, when it comes to benchmark tests, the difference in performance becomes apparent. The Pavilion 15 scores 7,254 on Geekbench 5.4, which is well below the XPS 13 Plus’s 8,871, as well as the MacBook Pro M2 (2022)’s score of 8,914. Still, that’s a decent score considering how much you’re paying against the competition, however – and again, the HP 15-eg2025nr doesn’t feel slower than the Dell XPS 13 Plus in daily use and navigation.

Also, you can expect pretty speedy performance from the HP Pavilion 15’s 512GB SSD, as well. It duplicates 25GB in files in 19.7 seconds with a constant transfer rate of over 1.36GB per second. That’s fairly below the XPS 13 Plus (1.75GB/sec), again, but it beats rivals like the Microsoft Surface Laptop 4 (571MBps). It’s incredibly quick.

As you might expect from a laptop at this price point, the HP Pavilion 15 isn’t powered for intensive gaming. But it performs better than expected, despite using Integrated Intel Iris Xe graphics rather than a dedicated GPU. The HP 15-eg2025nr will not run super-intensive games like Cyberpunk 2077 or Forza Horizon 5, but it can handle most free-to-play games like Fortnite and Rocket League, but you’ll have to tone down the resolution for them to run at a stable frame rate.

HP outfits the Pavilion 15 with Bang & Olufsen speakers, which do a fine job of presenting clear and crisp audio playback on such a thin notebook. They get quite loud and the music output sounds well-balanced overall, although bass is lacking.

As for battery life, we feel like HP would’ve done better: Given its weight we expect this to have some real tank for the juice to last at least a day at work, something like 8 hours would’ve been better. In tests, the battery doesn’t get far past the six-hour mark, although HP claims over 7:30 hours on a single charge. Thankfully, it’s a quick charge, reaching half capacity in around half an hour.

The HP Pavilion line has long been regarded as the pinnacle of midrange Windows computing. The HP Pavilion 15 (15-eg2025nr) continues this legacy of excellence. Even if it isn’t shaking the computing world with never-seen-before features, it’s an all-around fantastic machine that’s fine for everyday work ad entertainment.

But if you’re not convinced the HP Pavilion 15 is for you something more powerful and much lighter, consider the Asus ZenBook 14X OLED that comes with the more powerful Intel Core i7-1260p processor, Nvidia GeForce MX550, and 16GB RAM. You can run more intensive apps on the ZenBook 14X, but for day-to-day performance, they aren’t far apart.

Still, there’s something to be said for a dependable laptop that does exactly what it needs to. While the HP Pavilion 15 (15-eg2025nr) is more of the same, that same is super awesome. If you need a great, reliable, and affordable Windows ultrabook, this is it. 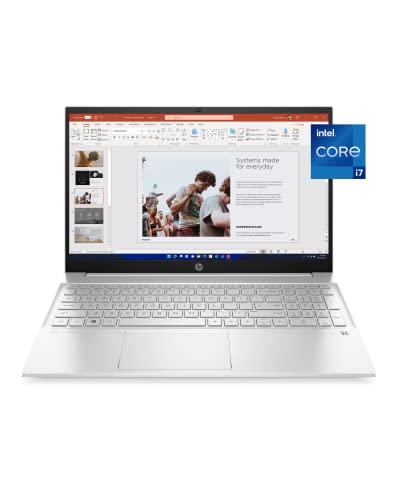