The HP Pavilion Gaming Desktop TG01-1120 is priced to sell, boasting a dedicated GTX 1650 graphics card, a 10th Gen Core i5-10400F processor, and a design that will sit comfortably in the office and at home, all at a very reasonable price.

The HP Pavilion line is designed for busy homes and schools, which means these PCs pack solid components, have a straightforward design and have reasonable prices. It’s available in a wide range of configurations, HP bolsters the core range with a Pavilion TG01-1120 with a dedicated GTX 1650 graphics card, a 10th Gen Core i5-10400F processor, and ties in a keyboard and mouse combo to get you started out-of-the-box. If you’re on a tight budget, this could be one of the best home computers for you.

This particular model of the HP Pavilion gaming line will set you back less cash than a single Nvidia GeForce RTX 3080 graphics card, but you’re getting a compact desktop gaming PC that’s capable of playing the latest AAA titles at 1080p resolution at high settings. That’s pretty all you can ask from a budget-priced gaming PC and more reasons why this HP model is a solid pick for getting the most for your money.

With a design similar to last year’s HP Pavilion TG01-1022, the HP Pavilion gaming desktop looks attractive with a classy faceplate with inverted V-shaped patterns and customizable LED lighting at the bottom, next to an HP logo. If you need a desktop that looks great on your desk, you should seriously start from here.

It includes a decent number of ports as well, including four USB 3.1 ports, one USB Type-C port, four USB 2.0 ports, an RJ 45 Ethernet port, a headphone jack, and a built-in card reader. On the Nvidia GTX 1650 Super graphics card you have an HDMI, DVI and DisplayPort, just in case you need to do a dual-monitor setup.

Also bundled into the package are a standard keyboard and mouse, and while they aren’t gaming gear, at least HP included something. However, the package doesn’t include a monitor, should you need one, the 24-inch Sceptre E248W-19203R is worth a look.

The right combination of price and performance is what sells this HP gaming computer. The inclusion of an Intel Core i5-10400F processor, Nvidia GeForce GTX 1650 (with 4GB) Super graphics card, 8GB RAM, a 256 GB SSD, and Windows 11 Home (high-end machines come with Windows 10 Pro, though) makes it a strong entry-level gaming contender and a solid workhorse among machines in its price range.

These specs allow the HP gaming desktop to drum up butter-smooth 1080p gaming performance in today’s demanding titles. That’s with the visual settings maxed to high, if you crank the setting to ultra, the visual quality will take a hit. Still, few desktops in this price range can claim to do that.

Most of us will be buying the HP gaming desktop for the simple reason it can be used as a gaming hub at home or a productivity centerpiece at the workplace. However, if you’re simply buying a gaming PC, the CyberpowerPC Gamer Xtreme GXiVR8060A11 is a better alternative.

The right combination of price and performance is what sells the HP Pavilion Gaming Desktop. The inclusion of an Nvidia GTX 1650 graphics card makes it a strong entry-level gaming contender among machines in its price range, allowing it to drum-up good 1080p gaming performance in today’s modern titles, but not as butter-smooth as you get with the CyberpowerPC Gamer GXiVR8060A11.

HP offers a host of other Pavilion Gaming Desktop with SSDs and Omen Command Centers or SSD and hard drive pairings. We did spot an HP Pavilion model with an AMD Ryzen 7 5700G chip and an RTX 3060 graphics card, 16GB RAM, and 512GB SSD, but it costs well over $1,000. If you’re shopping on a tight budget and want to keep everything reasonable, the HP Pavilion TG01-1120 delivers at least everything you could reasonably want in a budget gaming PC that can be used at the office as well. 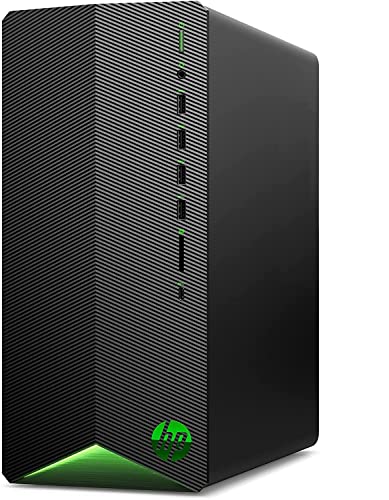