Gaming has never been a cheap hobby as say, Origami that only requires folding of papers. If you fancy PC games, keeping up with the latest technological trends will definitely take you back a tidy sum – than buying a pad of paper. Enter the HP Pavilion Power 15-cb077nr, a gaming laptop that’s within reach for gamers with not-so-loaded pockets.

The Pavilion 15-cb077nr is great laptop for enthusiast gamers who need smooth 1080p playability. It’s not cheap, but is an excellent choice if, like most of us, the thought of spending upwards of $3000 on a rig calls for some special grace and week-long meditation to get over the stress of such a purchase. In the same line, there are configurations with AMD’s Radeon RX 550 and 12GB memory (HP 15-cb071nr) as the base model, and another one with Nvidia’s GeForce GTX 1050 Ti and 16GB memory (HP 15-cb079nr) at the top of the line.

Our review unit, the HP 15-cb077nr is sandwiched between the other two iterations and, is outfitted with Nvidia’s GeForce GTX 1050 graphics card, 8GB RAM and a pretty new Kaby Lake i7-7700HQ processor. It is the same chip used in the fantastic Acer Predator Helios 300 we reviewed not long ago, but it undercuts the Predator in pricing as it for the Nvidia GTX 1050 (2GB) model.

Let’s get the part of pricing out of the way quick, though. The HP Pavilion sports only 8GB of RAM against the Acer Predator’s 16GB, which trickles down to a knock-off effects on most titles, but for a gamer on a budget, the saving is much welcome.

Like any nice gaming laptop, the Pavilion is black. The chassis is an improvement over the standard Pavilion 15. It now has an improved aesthetic, with a brushed aluminum look that is far much sleeker than the older design. The keyboard glows white with a font that mimics the classical phone buttons. Now, the keys are sturdy, more responsive and although the touchpad isn’t one of the best, it still gets the job done, although we’re assuming owners will plug in an external mouse for gaming.

In designing the Pavilion 15, HP really focused on making it as portable as possible. It weighs in at only 4 pounds, and measures 0.95 inches thin, against; the Predator Helios’ 5.51 pounds and 1.05-inches thickness.

This is far much lighter than the likes of the ASUS FX503VM-EH73 which is also the same size. Overall, it’s much lighter and in some instances smaller than most of its rivals. If you need portability over everything else, costlier alternatives sporting narrow bezel design like the Yoga 720 and Dell XPS 15 are never out of reach. Sound quality is good, but isn’t the best, especially at high volumes as it lacks bass.

The full-size keyboard has well laid plastic keys, that provide soft tactile feedback. Noticeably, the keys don’t have much clutter, and comes with white backlight that can only be turned on or off. Competing notebooks offer better back-lighting options, including brightness settings.

For the touchpad, you have a chrome-trimmed area that’s fitted to work with Synaptics software that can recognize up to three fingers. Out of the box, response is flimsy but controlling the cursor is smooth enough for my liking. If your work includes lots of drags and drops, an external mouse is more preferable.

The Pavilion 15 Power series comes in three CPU configurations and display choices: Matte 4K UHD IPS (high-end model), glossy 1080p IPS (touchscreen) and matte 1080p IPS. Our review unit comes with a matte 1080p IPS screen, with better brightness and contrast levels than last year’s model. It isn’t as crisp as the 4K UHD iteration, but it does a nice job for the price.

If features like G-Sync and 120Hz are must-haves in your short list, you’ll have to look elsewhere. Perhaps, the HP Omen 15t or anything in the latest Omen Series, since none of those features can be found in the Pavilion 15 Series. Overall, the display quality is good for the price, irrespective of slight washouts, but you won’t find it distracting during regular use.

Except for the missing optical drive and addition of a USB Type-C port, connectivity is identical to the rest of HP’s Power 15 Series. The included Type-C port doesn’t include Thunderbolt 3, instead, HP delegated this feature to the high-end Spectre and Omen range of notebooks.

In addition to the aforementioned USB Type-C port, there’s an SD card reader, a single USB 3.0 port, HDMI-out, gigabit Ethernet and an ac adapter port on the right, while the left has a pair of USB 3.0 ports, a 3.5mm combo audio and a Kensington Lock.  For communication, there is an Intel 7265 2×2 WLAN module for 802.11ac and Bluetooth connectivity.

The Intel Core i7 processor used here is a quad-core chip, which is an improved version of the dated i7-6700HQ, which comes along with marginal performance boost. Compared, the older chip will be over 30 percent slower than the newer i-770HQ when working on multi-threaded workloads considering than the former is only a dual-core chip.

For a daily use notebook, the Intel processor within helps the Pavilion keep up with nearly everything but the most extreme computing tasks.  This laptop will do just fine for the power user or general student, and will even be able to cope when it comes to video rendering, image editing and intense spreadsheet work. The fact that it has a dedicated graphics card makes ideal for media projects as well.

HP bills the Pavilion 15-cb077nr as a gaming laptop, though it looks more of a desktop-replacement laptop. Considering that it gets a dedicated Nvidia GeForce GTX 1050 graphics card, something you only find among gaming laptops. This GPU is sandwiched comfortably between the older GTX 960M and GTX 970M, but is almost GTX 1050 Ti. Being an upgraded version of the older GTX 950M, the GTX 1050 gets a graphical boost of about 60 percent.

The GTX 1050 is muscular enough to offer decent playability on most modern titles at maximum 1080p settings, but still deliver above the average 30 FPS. However, it won’t deliver frame rates of above 60 fps on the same settings, which isn’t a surprise for a midrange gaming notebook. Performance scores include: The Witcher 3 – 41fps, Fallout 4 – 43fps, and Overwatch – 94 fps; all played at 1080p resolutions.

The HP Power 15-cb077nr’s 70 Wh battery life should be one of the reasons you’d consider buying the system. You can expect about 8 hours on single charge, which includes surfing the web, streaming music or simply working on a college project. This is very decent for gaming laptops, that only last just above 3 hours before you need to hook it to a wall charger. Recharging the system from near empty to full capacity will need around 2 hours.

In the new HP Power 15 Series, the Pavilion Power 15-cb077nr is easily the most recommendable choice as compared to the two other models. It undercuts the rest on a price-feature basis and, the HQ-class paired with Pascal graphics card make it more desirable. On this system, HP did an impressive job in updating the chassis to a point that the system more comfortable than its price competitors, while the bright display enhances the overall user experience.

Still, you need to be aware of middling speakers and a not-so-good finish on the touchpad before buying. It’s never a perfect world, after all, and for these shortcomings HP wraps it up with excellent performance, good choice of storage options, a desirable aesthetic, great battery life and reasonable pricing. If you need a laptop that is perfect for work, college and playing modern titles, this HP Pavilion is worth the expense. 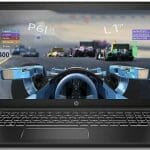