The latest HP Pavilion x360 sits right at the edge of a premium laptop, boasting strong productivity performance, a comfortable keyboard, and a pair of Bang & Olufsen speakers, in a stylish, portable design. This 2-in-1 notebook would be among the best laptops (at least one of the best convertible laptops) if only its fans were a little silent and the display was brighter. Despite that, the HP Pavilion x360 14-dw1025nr is a great machine for the price.

HP’s Pavilion range has for long been a popular option for office users and students, offering a combination of performance and style at affordable prices. So, how does the latest 14in HP Pavilion fare amidst stiff competition? Let’s find out in this review.

Our review unit is the HP 14-dw1025nr model, which boasts an 11th Gen Intel Core i5-1135G7 processor, Intel Iris Xe graphics, 8GB RAM, and 256GB SSD storage. This is pretty the same spec sheet in the Pavilion x360 14-dw1024nr (Windows 10 Home) model we reviewed last year, only that this latest model comes with Windows 11 Home pre-installed and a few design changes on the chassis.

The hood of the Pavilion x360 is dressed in natural silver, and stamped at the center is a reflective HP logo. It looks slimmer than the spec sheet would suggest, thanks to the clever deployment of curves and angles around the casing. When you open it up, the two-tone hinge de-emphasizes how chunky the bottom screen bezel is.

When you fold the lid around to switch the Pavilion into tablet mode, you’ll be glad it isn’t that small: the bezel forms a grip area for your hand, allowing you to hold the thing clipboard-style without triggering the touchscreen. There’s also a Pavilion logo on the hinge of the x360.

Unlike its previous models of the HP Pavilion x360 that sport a silver tone on the deck, opening the 14-dw1025nr reveals a black keyboard deck and a vent grill for the Bang & Olufsen speakers just above it. It doesn’t get a fingerprint reader like its premium siblings; the bezels on the display remain fairly slim.

The HP 14-dw1025nr convertible’s 14-inch, 1920 x 1080 touch display is a little on the dull side. And while the screen is fairly bright, it has a glossy texture that makes it a little uncomfortable to look at – the panel is rated for 250 nits of brightness when we usually look at 300 nits as a minimum and hope for 400 or more.

Fold the screen back into tablet mode, and you can interact with the included pen. The 5.5-inch stylus takes one AAA battery and has two round buttons on its barrel, which is fine-tuned via the HP Pen Control utility. It has good palm rejection and easily keeps up with fast swipes, though its pressure sensitivity isn’t precise.

Typing on the Pavilion x360’s keyboard is quite satisfying and comfortable. While the keys aren’t snappy, they nevertheless feel smooth and require a decent amount of force and travel before they register a click. With 1.4 millimeters of travel, they are still below the 1.5 to 2.0 mm range, and they require a solid 70 grams of force to actuate.

The 4.3 x 2.1 – inch touchpad is quite responsive and works fine. The pad has Windows Precision drivers, so it handles Windows 10 gestures – including three-finger tabbing and two-finger scrolling, nicely.

The 11th Gen Intel Core i5-1135G7 CPU and 8GB of RAM on the Pavilion x360 allow for speedy multitasking. You won’t feel any stutter when you split your screen between 13 Chrome tabs, including Google Docs, and Twitch alongside a 1080p YouTube playing in the background.

If you’re looking to do some serious video editing, this laptop can get it done -but not exactly quickly. The 256GBSSD in the Pavilion 14-dw1025nr duplicates 4,97 GB. of files in 26.54 seconds, which while a little slower than the 10-second and 12-second transfer times from the XPS 15 (1TB SSD) and Spectre x360 (1TB SSD), respectively.

For gaming, the Intel Iris Xe graphics card offers decent performance, but not anything close to the flagship TTX 30 Series graphics cards. The Intel Iris Xe is one of the most widely used graphics processors in late 2020 laptops and is integrated into the popular 11th Gen Intel Core I and i7 G7-series main processors.

HP promises up to 8 hours of battery life on a single charge, but the much you’re getting in real-world use is around 6 hours 42 minutes, which includes continuous surfing the web over W-Fi at 150 nits of brightness, which is just above the mainstream laptop average.

The HP Pavilion x360 (14-dw1025nr) is a decent mainstream 2-in-1 laptop in that it offers stellar performance, a fantastic keyboard, and some bangin’ speakers. We only wish the 1080- display was a little brighter to match the competition, but it isn’t the worst we’ve seen, and it doesn’t affect overall performance at all.

For a little more, you can get the Asus ZenBook Flip 13, a 2-in-1 convertible that features a more premium design, stronger performance, and a battery life that will let you stay online for more than 11 hours.

But overall, this HP Pavilion x360 is a decent 2-in-1 laptop if you can overlook the screen brightness. Otherwise, the x360 gets more or less everything right, at a price that undercuts most rivals – and the ability to flip the screen into tablet mode is a great bonus. 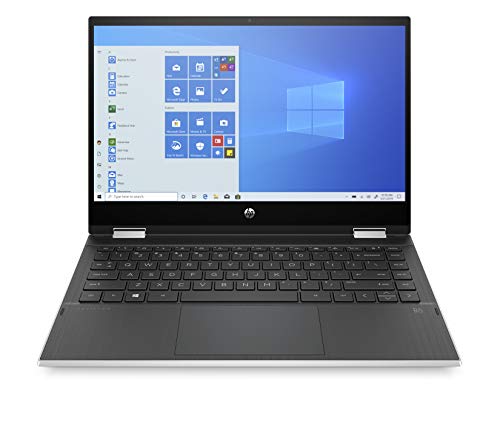 The HP Pavilion x360 14-dw1025nr is a 2-in-1 laptop that gets more or less everything right, at a price that undercuts most rivals – and the ability to flip the screen into tablet mode is a great bonus.