The HP Stream 14-cb159nr is a Windows 10 laptop that affirms Microsoft’s resolve to compete with Chromebooks in the budget laptop category. It’s a smart move that unties the conventional wisdom that you have to pay a premium for an ultraportable laptop, and it undercuts most of our recent Chromebook review units.

If you’ve browsed the electronics departments for a value laptop for college, chances are good that the HP Stream 14-cb159nr has caught your eye, either for its design or its ultra-affordable price. HP has been offering this low-powered budget laptop as a Windows-alternative to Chromebooks for a while now. Unlike its predecessors, the Stream 14 is larger (the others maxed at 13 inches), but not much has changed.

It manages to compete with Chromebooks by sticking to the bare essentials: a low-powered CPU, minimal RAM and 32GB of flash storage. While that may not be enough for the very best Windows experience, you nevertheless get a functional budget laptop for college and general use.

The HP Stream 14 has a slim and light design, measuring about 0.77 by 13.27 by 8.9 inches (HWD) and weighs 3.17 pounds, so its extremely easy to carry around. In fact, it fits into the most little of spaces including on an airline tray table or even in your laps at the local McDonalds as you edit a TPS report or term paper.

Our review unit came in a black chassis, which is the same theme on the keyboard deck, but you can get other iterations in Aqua blue and Violet Purple. It’s gorgeous-looking, and the plastic looks high quality than some entry-level laptops and Chromebooks we’ve seen.

The white chiclet-style keyboard has good travel, has a nice contrast to the chassis hue, is full size and is comfortable to type on, and the one-piece touchpad is responsive. Here you don’t get a backlit keyboard, but that’s among the few tradeoffs to make in order to keep it affordable. 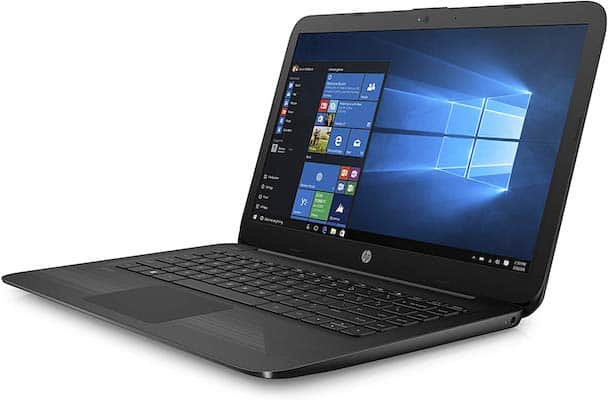 The HP Stream 14-cb159nr has a 14-inch display with a 1,366-by-768-resolution, which does a nice job showing clear visuals and text. In fact, its text and other end-user graphic element are rendered better that you’d experience in most 11-inch laptops with the same resolution including the HP Stream 11-y010nr and the Dell Inspiron i3179-0000GRY. The 14-inch screen on the Lenovo Ideapad 510s is full HD (1,920-by-1,080 resolution) but that system is part of the high-end ultraportables.

Narrow viewing angles are perhaps the only minor flaw you’ll find in the Stream 14’s screen. While looking at the screen while seated too far to the sides, the images appeared washed out dark, but it isn’t a deal-breaker. In-Plane Switching (IPS) screens like the one on the ASUS Transformer Book T100HA-C4-PK have better viewing angles and display smoother text, but the Stream 14’s LCD is certainly fine for a budget laptop. The sound output is loud enough to fill a small room, although they are a little tiny.

In addition to the microSD card slot, the system’s HDMI port, headset jack, one USB 2.0 port, two USB 3.1 Gen 1 ports are all on the sides of the system. The three-cell, 41-watt battery is non-removable. Wireless connectivity is standard 802.11ac Wi-Fi and Bluetooth 4.0 combo.

The Stream 14-cb159nr uses a 1.6GHz Intel Celeron N4000 processor with integrated Intel HD graphics and 4GB memory. That doesn’t sound too impressive, but remember that it’s a dual-core processor and the system’s 64GB eMMC flash storage does help speed things along. During testing, I was able to reboot quickly and launching most programs was only a matter of seconds.

Storage comes in way of 64GB on an on-board eMMC solid-state drive (SSD) and 4GB of system memory. After the initial setup, you’ll have around 47GB on the drive free. Still, the 64GB doubles the 32GB we’ve previously seen on most Chromebooks. If you need to supplement the 64GB storage, you can do locally using either a USB drive or via the system’s microSD slot. As mentioned earlier, HP includes a one-year subscription to 1TB of online cloud storage on Microsoft OneDrive and use of Office 365 Personal with the system. 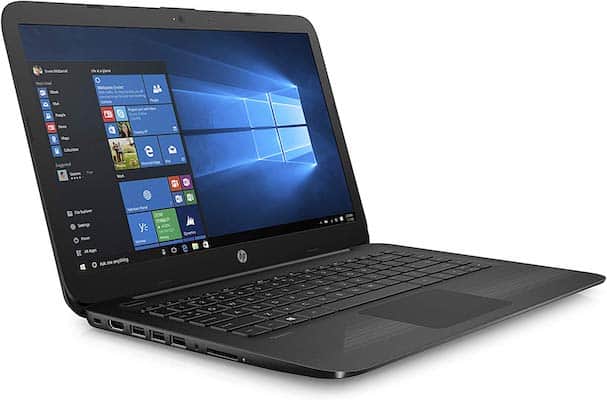 The only system that beat it in this price category is the HP Stream 11 (9:23), and that’s by only by a scant 6 minutes.

The HP Stream 14-cb159nr is a Windows 10 laptop that affirms Microsoft’s resolve to compete with Chromebooks in the budget laptop category. It’s a smart move that unties the conventional wisdom that you have to pay a premium for an ultraportable laptop, and it undercuts most of our recent Chromebook review units.

The speedy eMMC SSD makes it faster than most budget Windows PCs, and if you have constant Internet access you won’t have to worry about running out of room on the 32GB SSD.

Most alternatives at this price range are Chromebooks, of which you can easily score a premium design and even better performance. For around the same price, the Asus Chromebook C425 (C425TA-DH384) offers better performance, thanks to an intel Core M3-8100Y processor, 8GB RAM and 64GB eMMC storage. It adds a backlit keyboard, a Full HD (1,920 x 1,080) resolution and a timeless, premium design.

Yes. If Windows is a must have and you’re shopping for college on a budget, the HP Stream 14-cb159nr makes for an excellent choice. 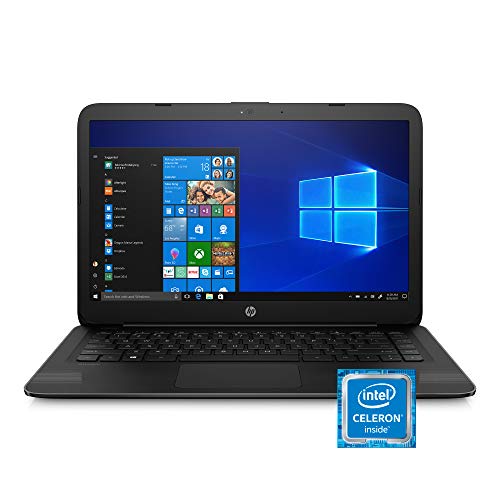