The iBUYPOWER Pro AM8520i is a serious thrill to productivity enthusiasts and esports hounds who value performance over anything else – including price and styling. Its feature set and design tell a story of more computer than you’re paying for.

Like most spendy gaming desktops, the iBUYPOWER Pro AM8520i is muscular and fully featured for folks who happen to take their play seriously. In configuring this rig, iBUYPOWER targets the most enthusiastic of that lot: pro gamers and aspiring esports players. This PC provides the requisite components to power through games at tip-top settings, with its design and features seeking to maximize performance as much as prevail on convenience.

The AM8520i serves as an entry into Intel’s hexa-core Core i7-8700K processor, and it packs a snappy GeForce GTX 1080 graphics processor, too –taken together, a punch packed proposition.  If the machine’s looks and design aren’t your thing, its performance and configurable option as a high-end gaming system will.

The level of craftmanship employed here is top-notch. Everything, from the size to the shape and angles on the case is perfect and well complemented, resulting in a not-so-loud, great-looking design. iBuyPower has a tendency of exaggerating bling, but on the AM8520i they appear to have perfected the art of delivering a gaming machine for those who don’t fancy lights all over the place. The View21 is tall, black in the entire body, except for a blue ring at the bottom on the front panel.

At first, I mistook the blue ring for an overgrown power button.  At 21.38 by 12.5 by 25 inches (HWD) and 30 pounds, the system will take some space on your desk. If you have limited space on your desk, a small-form- factor (SFF) desktop like the ASUS GR8 II-T044Z is a better choice.

The glass tempered side panel gives you a gaming aesthetic that can be seen from any direction, and displays the interior cabling, dotted with LED lights. To that, it adds a liquid cooling compartment, and a standard iBUYPOWER gaming keyboard and mouse.

Connectivity is excellent. Just about the only lackluster thing is the lack of USB-C port. You’ll find a total of four USB 3.0 ports, four USB 2.0 ports, an RJ-45 connector and a 7.1 audio channel. On the dedicated graphics card, you get an array of ports that include: one DVI port, one HDMI and a display port. In addition to the RJ-45 port, it gets wireless connectivity via 802.11 USB Wi-Fi adapter.

For storage, there’s a 1TB, 7,200rpm hard drive installed, and the SSD has a 240GB capacity. If you want more storage capacity, it’s very possible to upgrade these drives or even add more in the available drive bays. There isn’t an optical drive, which is fine given that you’re more likely to download your PC games from services like Steam or Origin.

In fact, having an optical drive would simply break the stylish design. The system comes with Windows 10 Home (64-bit), alongside a wired gaming keyboard and mouse bundled into the package.

Although you can’t see it beyond the tempered glass side panel, the raison d’être for the AM8520i 035A is the hexa-core Intel Core i7-8700K processor and 32GB RAM. This is part of Intel’s eighth-generation chips released earlier in the year, though we now have the spanking-new Core i9-9900K processors, with better base clock speeds, especially when packed together with the newer Nvidia GeForce RTX 20s graphic cards.

The newer chips notwithstanding, the hexa-core Core i7-8700K CPU is impressive all around, posting strong capability for general use. It is one of those chips that steer through any multimedia tasks, in a way that only, truly high-end desktops can do. Surprisingly, despite being the least-expensive option in the high-end gaming category, it is a very capable media machine that suits your needs for work or a hobby.

When comparing game scores, we’re sometimes tempted to reference more expensive machines, with some boasting two graphics cards. Compared to others with just one, though, the Pro AM8520i puts a strong face, again as a less-expensive option. The GeForce GTX 1080 doesn’t lean, averaging over 135 frames per second (fps) on Heaven and Valley gaming tests at Ultra quality settings and 1080p resolution. As expected, these scores reduce drastically when everything is dialed up to 4K, with the system managing only 32 frames pers second (fps) and 40fps on the synthetic benchmarks.

For some real-world gaming, the AM8520i tells similar stories on modern titles including Rise of the Tomb Raider and Far Cry 5. At maximum detail settings at 1080p, the Gamer GXiVR8200A averages 125fps on Rise of the Tomb Raider and 107fps on Far Cry 5, a bit lower than the benchmark tests, but impressively above 60fps. However, on the same settings at 4K, the system averages 48fps and 49fps. That’s notably better than the benchmark tests, which is the best news you can get for your gaming experience, and over 30fps regardless.

Of course, not many people are truly aiming to play AAA games at max detail and 4K. So, as demonstrated by the 1080p scores, you’re in very good shape playing at any lower resolution. The fact that it sticks so close to gaming rigs high up in the category like the Origin Chronos, make it a more desirable system given the price differences. The system doesn’t come bundled with a monitor, you’ll have to grab one like the ASUS ROG Swift PG348Q that will let you view content and play games at even 4K resolutions.

A few weeks ago, Nvidia just released the new RTX 20-Series to replace the RTX 10-Series. We just reviewed the Gamer GXiVR8080A3 outfitted with the newer Nvidia GeForce RTX 2080 graphics – its all cutting edge. From the onset, the next-generation GeForce RTX 20-series graphics cards (starting with GeForce RTX 2080 AND GeForce RTX 2080 Ti) look like the most significant generational upgrade to the gaming cards. The RTX 2080 system included in this system uses new Nvidia Turing architecture that boasts more cores than existing GTX GPUs.

Some real-world game scores, the RTX 2080 manages to achieve 54fps on Shadow of the Tomb raider at 4K at the highest setting, while Destiny 2 yielded 73 fps, once again at 4K and Ultra settings, with HDR turned on. This is pretty impressive for a single card GPU, and for the price it can’t get any better. Plus, short of the Nvidia RTX 2080 Ti, you won’t find another more capable graphics card.

The iBUYPOWER Gaming Pro AM8520i is an efficient, ready-to-go gaming PC with a distinct (yet common) style. Whether you personally like the aesthetic is a question for another day, but at least it has some personality and the trio of rings on the front panel and a transparent side make it stand out. The design, love it or leave it, is just a part of development that houses a unique array of components that are of more interest.

Of interest is that, the AM8520i offers decent performance and racks up well against expensive gaming PCs in both productivity and Full HD gaming, thanks to its Nvidia GeForce GTX 1080 graphics cards and a capable hexa-core Core i7-8700K CPU. With this combination, you don’t have any reason for DIY endeavors, since this high-end system has it all for much less than the competition.

That said, with a few hundred dollars more, you can get the future-proof Gamer GXiVR8080A3, a gaming powerhouse and a productivity beast with the latest components including Nvidia’s RTX 2080 Founders Edition graphics card. Except for the Nvidia GTX 2080 Ti GPU, the graphics card installed in this system is second to none, and the same muscle extends to gaming performance. It is our newest Editors’ Choice value high-end gaming desktop PCs. 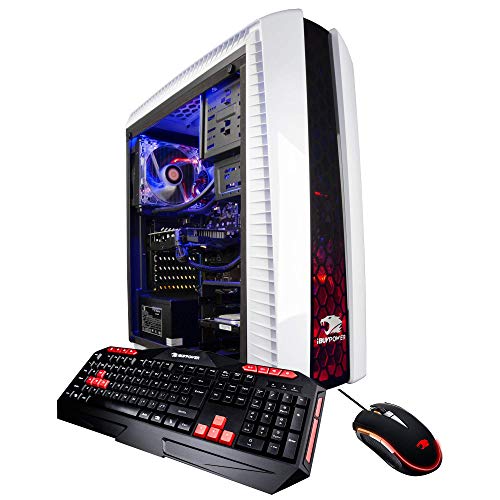