The iBUYPOWER Elite View21 035A’s design and remotely controlled RGB lighting make it stand out from the crowd, adding some caprice to a gaming PC.

Even stacked in the company of other high-end gaming rigs, the iBUYPOWER Elite View21 035A stands out. It packs impressive speeds and premium components into an intricate design, complete with a tempered side panel and an LED-lit front panel. Many DIY-ers can configure it with almost similar parts, but it will be expensive, but the sweetly loaded-up model we are reviewing is an engineering feat. Whether you want to use it for entry-level desktop gaming or as a general powerhouse, the Elite View21 spits excellence.

The level of craftmanship employed here is top-notch. Everything, from the size to the shape and angles on the case is perfect and well complemented, resulting in a not-so-loud, great-looking design. iBuyPower has a tendency of exaggerating bling, but on the View21 035A they appear to have perfected the art of delivering a gaming machine for those who don’t fancy lights all over the place. The View21 is tall, black in the entire body, except for a blue ring at the bottom on the front panel.

At first, I mistook the blue ring for an overgrown power button.  At 21.38 by 12.5 by 25 inches (HWD) and 30 pounds, the system will take some space on your desk. If you have limited space on your desk, a small-form- factor (SFF) desktop like the ASUS GR8 II-T044Z is a better choice.

The glass tempered side panel gives you a gaming aesthetic that can be seen from any direction, and displays the interior cabling, dotted with LED lights. To that, it adds a liquid cooling compartment, and a standard iBUYPOWER gaming keyboard and mouse.

Connectivity is excellent. Just about the only lackluster thing is the lack of USB-C port. You’ll find a total of four USB 3.0 ports, four USB 2.0 ports, an RJ-45 connector and a 7.1 audio channel. On the dedicated graphics card, you get an array of ports that include: one DVI port, one HDMI and a display port. In addition to the RJ-45 port, it gets wireless connectivity via 802.11 USB Wi-Fi adapter.

For storage, there’s a 1TB, 7,200rpm hard drive installed, and the SSD has a 240GB capacity. If you want more storage capacity, it’s very possible to upgrade these drives or even add more in the available drive bays. There isn’t an optical drive, which is fine given that you’re more likely to download your PC games from services like Steam or Origin.

In fact, having an optical drive would simply break the stylish design. The system comes with Windows 10 Home (64-bit), alongside a wired gaming keyboard and mouse bundled into the package. 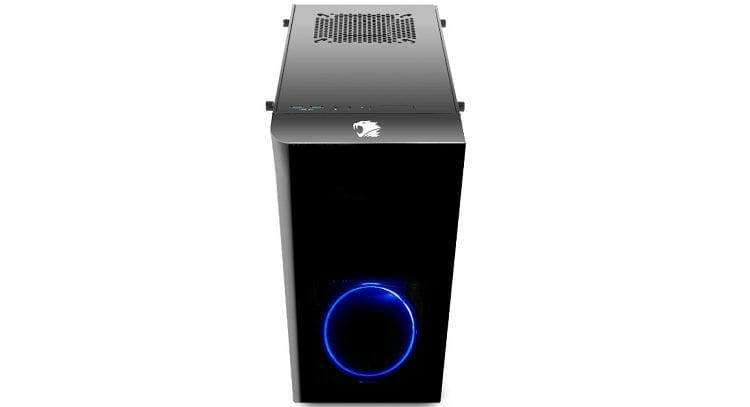 Although you can’t see it beyond the tempered glass side panel, the raison d’être for the Elite View21 035A is the AMD Ryzen 1800X processor and 16GB RAM. This is AMD’s new top-end chip, released alongside the AMD 1700X chip, with a base clock speed of 3.4GHz and eight processing cores (which amounts to 16 threads), a direct competitor to the Intel Core i7-8700k, but impressive in some ways. This chip’s base clock is 3.6GHz (up to 4.0 GHz), and has a TDP of 95 watts, better than most of its competitors.

This becomes particularly important when looking at the Elite View21’s performance. If you’re paying for an eight core Ryzen 7 desktop, you should expect no less than top-end speed, which it delivers across all spheres. For general productivity, it is among the fastest AMD-powered systems you can find around.

It beats most newcomers on in multimedia tests including Photoshop, making it a big deal for video encoding and picture editing. It leads the pack for daily productivity in such a dominant fashion and manages to stay right up there among the best in category.

Like its predecessor, the AMD RX 580 (4GB) graphics card remains the main reason to buy this system. This is a fairly new midrange GPU that falls in the same class as Nvidia’s GeForce GTX 1060 GPU, and a successor to the dated AMD RX 480 graphics card. As we wait for AMD to launch the RX 680 Series, the RX 580 remains the GPU of choice, at least for now.

It delivers crisp 1440p gaming performance, a step ahead of the usual 1080p gaming experience on most entry-level systems. Considering that gaming PCs are all about playability, this system stacks well against pricey behemoths. Plus, the fact that it offers solid HD and VR playability, it emerges top among gaming PCs ranked higher in the category.

On the iBUYPOWER Elite View21 035A, you’ll play a bunch of modern titles at maximum resolutions, although 4K and 3D gaming is a reserve for the ‘mean-beasts’ in the high-end category. For the casual gamers, scores of 60.6 fps on Grand Theft Auto and 176 fps on League of Legends, all played at 1080p is more than you’re paying for.

The iBUYPOWER Elite View21 035A’s design and remotely controlled RGB lighting make it stand out from the crowd, adding some caprice to a gaming PC. Having a case with transparent side panel is quite common, but this one does it in a stylish way, and the front panel isn’t exaggerated with bling, so it can be used almost everywhere, provided you have enough space.

Plus, it offers more style than most of its competitors, has room for future upgrades, and boasts of components suited for the modern gamer. Our Editors’ Choice CYBERPOWERPC Gamer Panzer PVP3020LQ offers strong gaming performance thanks to its Nvidia GTX 1080 card, and is a multitasking champ with its quad-core processor, but the iBuyPower Elite is an appealing option that will allow you to remain with a few hundred dollars in your pockets. 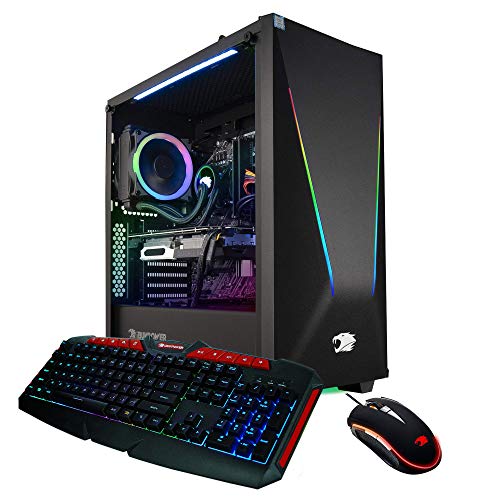